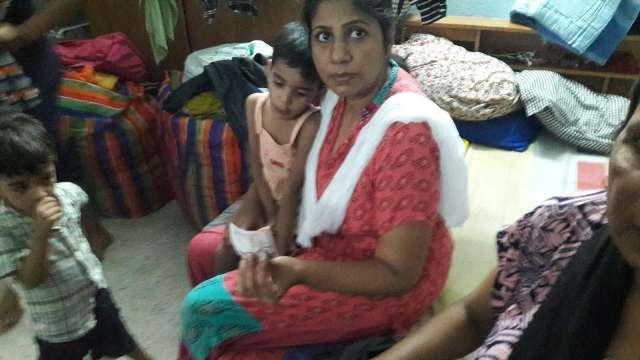 In the wake of arrests and threats of deportation of the large Pak-Christian asylum seekers community in Thailand.  Our local BPCA officer has been working hard to locate those who have escaped the immigration bureau.  We have discovered many hidden asylum-seekers and have offered aid at this difficult time of fear and family separation as the traumatised community try to make sense of life after the latest immigration campaign.

Despairing mothers have been left behind to care for children on their own without any recourse to funds and with help from others having been limited after the Government warned humanitarian groups and citizens that anyone found helping illegal overstayers would be fined and imprisoned.

Some families have been left without their primary breadwinner due to their arrest making life extremely difficult. With the imminent threat of arrest and deportation under the current Royal Thai Government zero-tolerance policy (Klicke hier), many have had to turn down work for their own safety. One asylum-seeker said:

“I was offered three temporary jobs since the crackdown but it was too dangerous to go to the place where I would have to work. My friend felt compelled to take a job because they are the only one in their family that can work. Though it is always dangerous in normal circumstances, the threat level under the current campaign is at it’s peak .”

“Please pray for us!  Fear is in the air. The immigration police seem everywhere and we are all very frightened to be returned to Pakistan.”

Meanwhile, women sit huddled in their apartments trying to keep their young ones quiet to avoid detection in the unnatural and unsafe conditions they find themselves in. They dream of a day their children can play outside, or learn dearly loved games like football of cricket. But for now the sunshine is kept out and food is rationed to prolong resources.  Moreover clothes and essentials are packed and ready to go should they encounter any need to exit their places of shelter immediately. One young mother said:

“Children want to play and it is very hard to keep them from making noise, but we must stay quiet and dare not bother our neighbours.”

Images show ladies take their stipend and budget for the month ahead to manage the funds that will replace the lost income from their usual providers.

Reports from inside the Immigration Detention Centre tell us that a few UNHCR rejected Pak-Christian families having lost all hope, have already begun to depart Thailand and BPCA is trying to keep track of returnees to check on their condition.

The first of the departures occurred on Monday and inmates have described the great sorrow it caused as long term comrades watched their friends taken away to be returned to the nation they fear.  Grown men cried as they were escorted to an impending doom and those left in the IDC wept vigorously for their forlorn friends and in trepidation of their imminent similar fate. The draconian conditions in IDC mean these families are put in limited space in unhealthy conditions with asylum seekers from all over the world. Given that they are held in these conditions for an indeterminate amount of time it is often too much to bear and many seek assisted returns after a long period in captivity.

There are deportations scheduled in the coming week. With the greatest travesty being that the Thai Government officials had initially failed to recognise that many of those they deem to be a visa-overstayer are registered as an asylum-seeker, identified as a refugee by the UNHCR. or already has a sponsor for immigration in a western country, but there had been some movement on their position regarding those determined Refugees by the UNHCR for whom a bail fee can free women and children only.

International laws are meant to be in place to protect these vulnerable people but despite having signed the UN Convention for Human Rights, Thailand continues to flount its precepts, basing their appalling actions on the fact they have not signed the 1951 UN Convention for Asylum or the 1967 protocol.

On the 19th of October we received word that due to international pressure Thai authorities will now allow bail to be posted at £1200 for UNHCR determined Refugees and have stayed their deportation orders – this will bail them out of Immigration Detention Centre but the same treatment has still not being afforded those with private sponsorships for countries such as Canada and Australia.

“The primary demographic of Pakistani Christian asylum communities is made up of families, meaning that children and their parents have lost up to 7 years of their lives trying to escape the evil that awaits them In Pakistan.

“I am very relieved that the deportation of UNHCR determined refugees has now been stayed and we are mobilizing to bail those who are eligible out; We continue to hope that private sponsorships will soon be included in this stay, as those waiting in detention have already been traumatized by seeing some of their fellows deported this week.”

“I heard from a Sponsorship Agreement Holder that many Canadian sponsors who have been waiting for their refugee families to come from Bangkok, have been inquiring to the Visa Office. These sponsors have invested a lot of time and their own money to privately sponsor a Pakistani refugee from either the Christian or Ahmadiyya minorities fleeing religious and gender-based persecution.

“Identification as a refugee by an SAH, would still go to show that serious harm could come to deportees, but there is nothing in particular being done to shorten red-tape by Canadian officials.

“To the Canadian government it is ‘business as usual’ and the Visa Office has not been instructed to view this crackdown as anything to be anything out of the ordinary. ‘These cases are being actively assessed and are following regular operating procedures’. ”

The need for community sponsorship groups to help displaced Pak-Christians in Bangkok is still very much necessary. If you have a heart to sponsor a Pakistani-Christian and would like some help networking to find like-minded people please send us an inquiry with your contact information and we will share it with the appropriate people. (Klicke hier)

British Pakistani Christian Association has identified needy families that we will be helping survive the crackdown by providing a regular monthly stipend of a 2000 Thai Baht, and will need £500 a month to sustain this project for 10 people. We know the 2000 Baht will only go so far to satisfy nervous landlords and hungry bellies, but it is something to help take off the pressure of going out and mitigates the risk.

We are also opening an appeal for the necessary bail fines to release Christians from inside the IDC, the current bail programme witll only free women and children.  We envisage a number of around 20 individuals have to be set free in the first instance as the children do not need to pay fines and will automatically be set free with mothers. Each bail fine has been set at 50,000 baht equivalent to £1270 and we will need to raise £25,400 to help them.