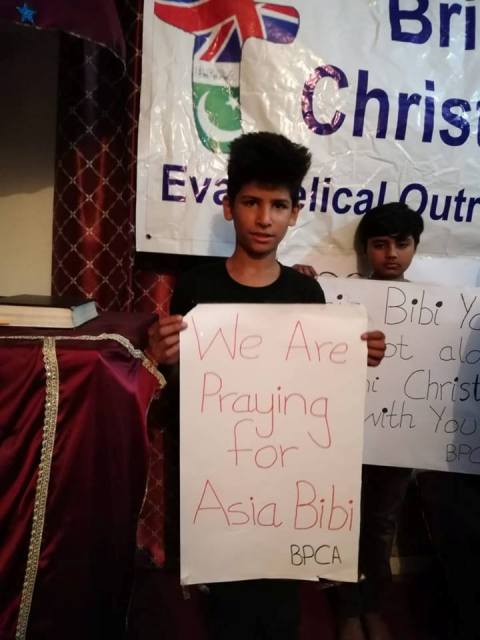 A narration of her arrest and the incident leading up to it was presented from the BPCA website (Klicke hier) on July 14th 2018, exactly 9 years on from her original arrest for blasphemy. Faithful Christians raised prayers and expressed hopes for the gates of her jail cell to opened and for Asia to be reunited with her family.

In an interview from 2015, Asia Bibi’s husband Ashiq stated her resolution to stand firm in her faith (Klicke hier) :

Former Governor of Punjab Salman Taseer and former Minister for Minorities Shabbaz Bhatti both of whom were martyred for attempts to raise concerns over her incarceration and calling for a review of the infamous blasphemy laws. An early timeline of events leading up to Shabbaz Bhatti’s assassination can be read (Hier) .

Passions are still high. Recently an attempt to assassinate Ahsan Iqbal is believed to have been triggered by his opposition to Pakistan’s brutal blasphemy legislation. (Klicke hier)

BPCA has removed its former petition which had attained close to 20,000 signatures. We launch a new one today which we hope will be a measure of the continued support of Asia Bibi and a reminder to Pakistan that the world is watching their mistreatment of our innocent sister in earnest. We call on people across the world to support this petition by applying their signature that Asia might know that she has not been forgotten; and that prayers and support are as fervent today nine years after her conviction, as when she first began her torturous journey to freedom.

The Targeting of Minority Others In Pakistan: 12 year old Shazia Bashir