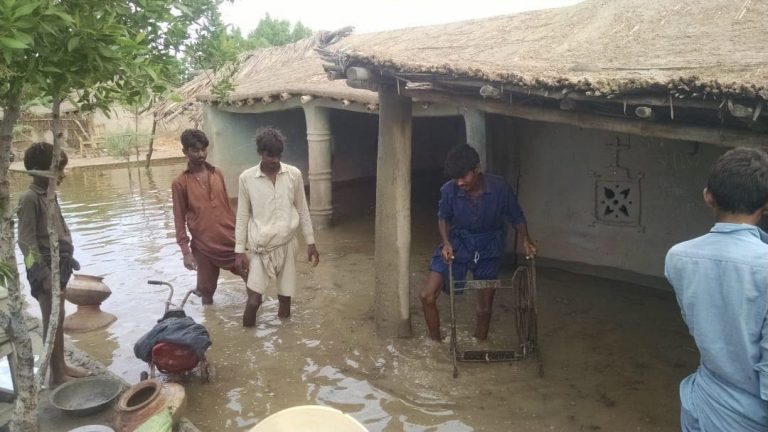 Flash floods in Karachi caused by unprecedented monsoon rains have engulfed large parts of Pakistan’s financial capital, forcing many businesses, shops and markets to shut down.  Pakistan has not experienced floods this intense  since 2010 and Chief Minister of the Sindh, said: “T he weather office recorded a total of 345 millimetres of rain in August so far, breaking the previous record of 298 millimetres in the month”

The rain started on the 25th August but the heaviest rainfall was on the 27th and heavy downpour remained for 2 more days. Our emergency team has visit homes in the Karachi area and nearby villages in rural Sindh to see how we can help.

Images and videos of the floods have been shown across global media including the BBC (haga clic aquí). People can be seen wading through water above waist height mixed with sewage and other health hazards. Families in big cities were forced to leave their destroyed homes to travel to refuge centres set up by local authorities, which consisted of tents or large communal buildings.

Families have been forced to wait to be rescued by emergency services while stranded on the roofs of their homes. the floods are said to be the worst since records began 89 years ago and already over 100 people have died across Pakistan. 8 people were killed from electrocution before measures were taken to switch off electricity supply to the affected areas.

Karachi has a population of around 20 million people, normally, Karachi records 6.8 centimetres of rainfall in the month of August but this year the rainfall of around 58.75 centimetres has broken all previous records. The whole of Karachi was submerged in the water. No area remained unaffected.

The surging waters turned streets into rivers and invaded homes, damaging walls and smashing doors, furniture and windows.  In some cases the deluge went as far as washing away homes entirely.

Though the floods have been indiscriminate we are focusing on the damage to Christian colonies which are all located on the edges of the water around the sewage drainage of the city. A little extra rain means these houses were in many cases destroyed. No refuge centres were available to these families and no help offered by any rescue services.  Families with small children had to wade through deep water, while parents carried small children, to get to the safety of a family members home further away. This was the case for Christian and other deprived families on higher ground.  Others simply lived on the roof of their houses for two days while awaiting the draining away of water which took two days. The Christians stranded on their roofs have told us that the only help they got was from members of a local political party PML-F who delivered some food on 27th August just before the huge deluge that swamped their homes. What made matters worse was that those living on the roofs of their homes had to fall asleep under the discomfort of continuous, heavy rainfall.

Timeline:
25th August – Heavy monsoon rains begin
27th August – PML-F party provide food bags with pre-prepared biryani to help families who are about to be flooded.
27th August – In the evening the Gujar Sewage Canal overflows with water filling homes with unhealthy sewage water close to 6ft in depth.
28th August – Rain continues and families starve for one day as they are stranded on their roofs.
29th August – rain stops and water lowers parents obtain food from shops with what little money they were able to salvage.
30th August – Water recedes from homes and families begin restoration work without support.

Tariq and Shugfta are parents to four daughters and a son and live in a Christian colony in the F.C area, Liaqat Abad, Karachi. The colony is built on the banks of Gujjar Nala (drainage canal) ) which carries sewage and the solid waste of the city. The area is a slum populated mostly by Christian sanitary workers and low paid laborers who work for the local municipal authority.

Water rose close to 6 feet in height destroying most of the contents of most homes in the area, which were submerged under the water. Water swept away their mattresses and string beds, clothes and kitchen utensil travelled far away from the homes of the owners. Some Christians in the area lived in mud homes and tents and for them nothing remains of their previous dwellings.
With sadness in his eyes, Tariq spoke with a BACA officer, he said:

“the heavy rains took everything from me.

“I have lost everything except these clothes that I am wearing.
“Occasionally while we lived on our roof rescue services delivered some food, but no further support.

“Now that the floods have subsided my family and I sleep on a bare floor without any bed or sheet.”

“despite the desperate situation we are in, no-one has offered any medical support.

“All the stagnant water will bring many diseases and I fear for my wife and children and my own health.”

He explained to BACA that on a few nights the family had to survive without any food and the hunger and stress from the flood had left them depressed. he further added:
“Rain has broken people.

“It will take years to rebuild our walls and other damage caused by the rain .

“We have no furniture and my children who will be returning to school need new bags, uniforms and equipment.

“I feel great despair and pray to God to lift my burden, only he can overcome.”

Already experts are laying fault for the floods on poor watercourse management and flood prevention facilities. A very informative article can be read here (haga clic aquí). Unfortunately for Christians the crux of the problem seems to be the ‘Katchi Abadis’ (shanty towns) where the Christians live meaning at some point they will receive a backlash.  Christian communities are often targeted by the Government for clearances increasing homelessness for our people, one example was a Supreme Court application by the Islamabad Capital Development Agency during Christmas 2015 (haga clic aquí). This is despite many of the residents from that slum having fled their actual homes after the blasphemy case against innocent 11 year old Rimsha Masih (haga clic aquí). She was later pronounced innocent after it was discovered a local Imam (mosque leader) implicated her by burning and tearing a koran to falsify evidence against her in order to foment hatred against ritually impure Christians in the area. . The family still had to flee to Canada for safety.

BACA is praying that Imran Khan’s government will be more strategic with their solutions, which should include providing new homes for deprived Christians if they choose to clear ‘Katchi Abadi’s’. Moreover, when they move these Christians they should not place them in equally insalubrious areas but should ensure their new homes have clean water infrastructure, waste collection services and other civic amenities.

Many Christians in the villages of the Sindh have lost their homes entirely, these recently converted Hindus were living in straw homes and the rains washed away what little they had.  Most of the images we display are from this region families had no support or help network and simply waited on higher ground till the water dissipated.  They quickly began to reside back in their homes despite the water reaching a level just below the height of the charpai (string beds). The human spirit can be quite strong and this Christian community continues to trust in God for their futures.

“Po or governance has led to the current situation and it is inevitable that the Christian minority will suffer most,  when Pak-authorities  choose what to do to resolve the current lack of flood protection and poor waste and sewage management.

“It is not simply good enough that the government clears areas to ensure the wealthy have a comfortable existence.

“The Government of Pakistan and all its existing authoritative bodies must fulfil their obligation to every citizen.”

“It is essential that Christians pray for these families as they fight despair whilst rebuilding their lives.

“Pray that Dengue fever, Typhoid, Malaria and other waterborne illnesses do not claim unsuspecting lives or gain a foothold in these vulnerable areas.”

BACA has set up a disaster relief fund and will help with costs involved in restoration of homes, general food needs and hope to raise enough to provide a visiting medical team to tackle existing sickness and to prevent further illness.  Please make this possible by supporting our work by donating (aquí)

Professor of Islam killed for calling of emancipation for women!