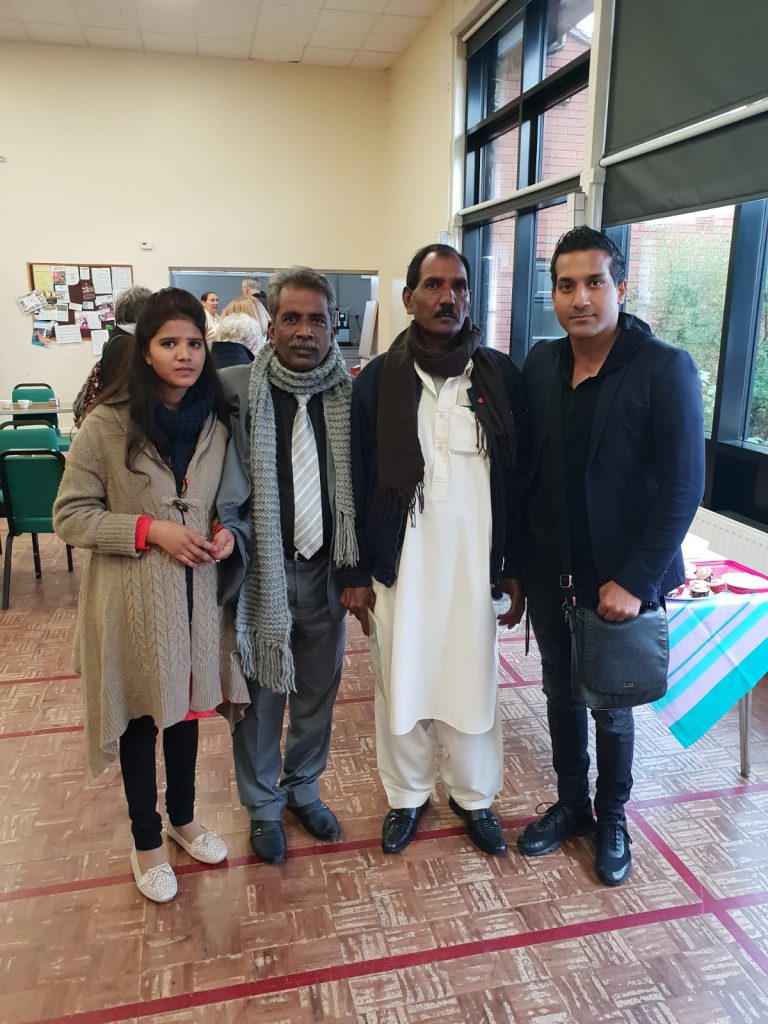 An Image of Ashiq Masih and his daughter at a church in Lancaster with Wilson Chowdhry.

After repeated rejection on Monday 8 October 2018 the long awaited final appeal to prevent the execution of Asia Bibi, a Christian woman sentenced to death for blasphemy, will be heard at Pakistan’s Supreme Court by a special three-judge bench headed by Chief Justice Mian Saqib Nisar in conjunction with Justice Asif Saeed Khosa and Justice Mazhar Alam Khan Miankhel.

Her husband, Ashiq Masih, and oldest daughter Eisham who spoke at an event organized by Aid to the Church in Need at the Catholic Chaplaincy of Lancaster University on 4 October said that Asia is doing well and express confidence that she will soon be free.

After being questioned by Wilson Chowdhry at Lancaster University, Ashiq Masih, said:

“She is psychologically, physically and spiritually strong,” said Ashiq. “Having a very strong faith, she is ready and willing to die for Christ. She will never convert to Islam.”

A narrative that has been repeated in exactly the same fashion since 2015, firstly in a report by World Watch Monitor (Cliquez ici).  They boldly printed in response to an article by Agence France Press that Asia Bibi had reported that her health had never been poorly since her incarceration and that contrary to popular opinion she was being treated more favourably then other prisoners and even had access to a TV.  However at Lancaster University the family said that Asia Bibi had ‘recently recovered from a serious illness which included severe pains in her stomach but had improved’ – a narrative that itself is as old as the article by World Watch Monitor and was told at a meeting at Spain (Cliquez ici), repeated at the Vatican and on a trip to the US and various other nations, by Asia’s husband and daughter. She has suffered stomach ailments before that became so severe she had intestinal bleeding, but for unknown reasons, or possibly a safety concern it is being minimized.

In April 2017 our lead officer Mehwish Bhatti was involved in a prison ministry and was touring jails across Pakistan to pray with and counsel Christians. During a visit to Multan she asked if she could pray with Asia but was refused access.  However, during discussion with prison staff  who care for Asia she was advised that she had sufferd several bouts of severe poor health and was commonly seen talking to herself, has  previously had bouts of screaming in fits of panic for no known reason that have abated over time; and to be suffering some traumatic memory loss.

Mehwish at a cake ceremony for Christian inmates at Multan Prison last year.

Last month Noreen Barkat leader of Masih Overseas a new Pak-Christian humanitarian group in Switzerland described how she too knew of Asia Bibi’s poor mental health after a reporter who had met her before security around her had tightened had described symptons to her.  She said:

“I am in touch with a Pakistani journalist who has met Asia and has described symptoms relating to her psychological health such as memory loss and confusion, which I as an assistant nurse would identify as symptoms of insomnia or dementia. Although she is not being treated for this in Pakistan and is simply being labelled as mad by prison staff.”

“There are many things we have learnt from prison staff, including the fact that Asia Bibi is now rarely visited by the family, which may be due to heightened security risk or inability to cope with the depression or dementia-like symptoms.

“Moreover, we are also aware that despite public statements of Asia Bibi’s health and assertions that she is being treated well, she does not have access to a TV and is only given 1 hours time in the open-air around three times a month.

“We are bold enough to say these comments publicly as we have corroborated this story through a number of prison staff and our colleague Noreen Barkat in Switzerland.

“In an article by Crux the family have said that ‘when she is released, she will able to answer questions in person’. (Cliquez ici)

“We hope that her release will result in the serious counselling and health care that she most definitely needs.

“Moreover that the truth about her harsh treatment and Isolation for 9 years shocks the world so much that Pakistan is forced to reform their prison-practice, laws and constitution to prevent any future similar human rights abuses.”

“The family of Asia have said that if Asia is exonerated they will flee to one of the many countries who have offered them asylum.”

This is Asia Bibi’s last chance at avoiding a death sentence for the blasphemy charge that was spurred by accusations in June 2009 (Cliquez ici) that she had ritually contaminated the drinking water because she was a Christian. Her supporters have long maintained her innocence and the Vatican has advocated for her release.

A team of prosecutors will be in attendance for the hearing including the prosecutor general of Punjab as will lawyers Syed Fayyaz Ahmed Sherazi, Saif-ul-Malook Chaudhry, among others.

Leading politicians have been assassinated for speaking for the long-suffering mother of five, including former Punjab governor Salman Taseer and Shahbaz Bhatti, both in 2011

If the Supreme Court rules against her appeal and upholds the execution order she will be the first person in Pakistan to be executed by the state for a blasphemy conviction. The only hope in this world that will be left will be for her to make a direct appeal for clemency to President Imran Khan.

“By the Lord’s grace these are the best judges that we could possibly hope for and I am quite thankful.”

When I spoke to Solicitor Malook I thanked him for all the efforts he has done for the community. He has fought bravely until the end like no other.

We must pray for the success of the appeal and BPCA will be at the courthouse to stand with her.

News of her poor health and possible early dementia are a paramount concern for our community, and the date of this appeal is very timely.

These charges have been proven false time and again and it is time for her to return home to her family. Clearly she will need asylum in a western country where she can live out the remainder of her days in peace.

We hope this time she will be completely exonerated and these this wrongful conviction will finally be overturned as this is her final opportunity to be heard at court and freed via the judicial system.