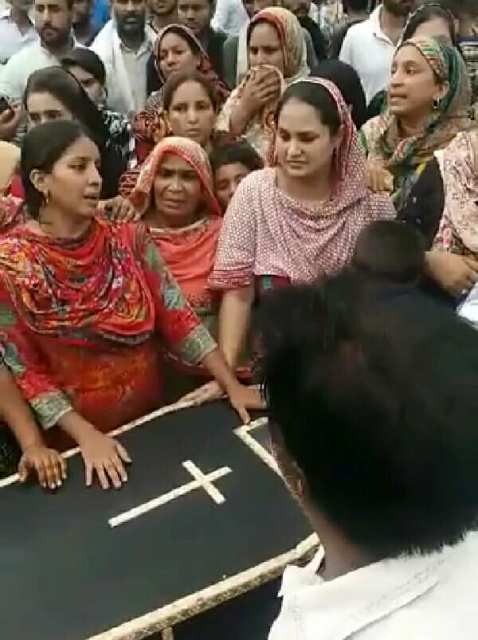 On 16th August 2018, a worker at Lahore High Court, Vicky Saleem Masih (30 yrs) brutally killed. Initial reports implicated three men named Mohammad Abbas, and two others, but only one has been charged with the murder. Though Vicky used the surname ‘Masih’ to identify as a Christian, the name on his identity card is actually ‘Bhatti’.

Vicky Masih was shot in cold blood when gunmen opened fire, the reason for the murder was first considered unknown but later chalked up to a dispute between Vicky Bhatti and Mohammad Abbas in a local news paper.

The police have registered an FIR against the culprits under the section of 837/18 on the request of his brother Robin Masih. The police have also confirmed that these three men were known to Vicky Saleem and possibly acquaintances however they have not made any arrests.

The grief-stricken family, upset with the police not apprehending the shooters, has blocked the Shafiqabad Galilee Church Band road in Lahore by placing Vicky’s dead body on the road as a protest. They are appealing to higher authorities for justice and people are gathering in the street in protest to demand justice.

BPCA has sent an officer to investigate further by meeting with the family and we will update this story as we receive more information. Please return to this post hourly to read further details.

“A Christian man has been murdered and the culprits are known. The very fact that Christian communities have to protest to get justice highlights ongoing grave concerns about the ability and the desire of Pakistani Police authorities to get justice for Christians.

“If the authorities of Pakistan fail to apprehend, arrest and convict these murderers then the already sullied reputation for the nation of Pakistan will reach its lowest ebb.

“If Imran Khan wants to prove he cares for minorities than he should make this open and shut case a priority ensuring justice in this case, would be a good step towards moulding a better future for Pakistan. Men of such violence simply should not be allowed to walk the streets unfettered.”

BPCA has set up an appeal to help with the funeral costs and other costs the family of Vicky Bhatti will now have to bear after this attack and for any cost required for a solicitor to ensure justice is done. People can donate by clicking (hier)

BPCA has sent an officer to investigate further by meeting with the family and we will update this story as we receive more information. Please return to this post hourly to read further details.

Child of 5 yrs who lost leg at 1.5 yrs during terrorist attack, has new prosthetic limb – thanks to your donations