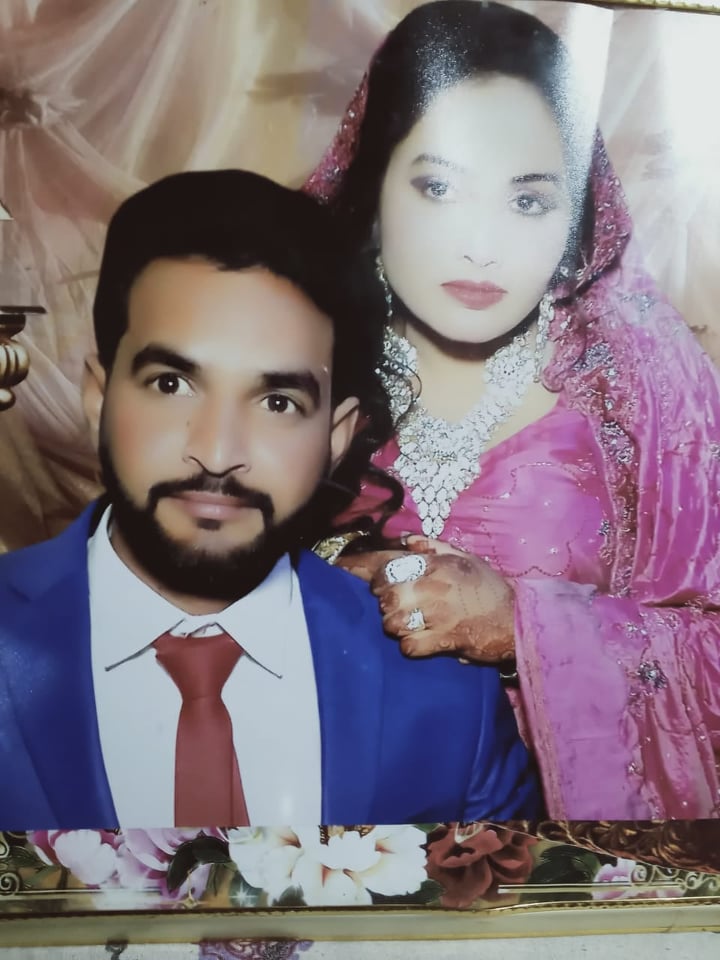 Image of Kaiman and Manisha at the end of this article is a gruesome image taken after his death which the family have asked us to share.  Please avoid this if it may affect you adversely.

A man, described as sincere and kind-hearted, was killed when he asked his friends to repay him money he lent them.

Kaiman Bashir, described as a man with a good heart, worked as an office boy for Mezan Bank in Faislabad earning around 13000 PKR,(£65), per month, would often borrow money from the two Muslim men.  So when asked for a loan in early June from his recent dividend he had no hesitation to lend to his two long term school friends.
After the agreed two month loan period had ended, despite repeated promises by the two men to repay back the loan Kaiman found himself still awaiting a payment. Kaiman, a resident of Chak 226 Satyana Road Faisalabad, became fearful that his friends were intentionally deceiving him and no longer had any intent to pay off their loan, so when a final full settlement date by 22nd October came about, he went along with his brothers, Nasir Masih (34 yrs), and Azeem Masih (32 yrs) to Mozam’s house as agreed to collect his debt.
Mozam and Akmal were both at the house at the time of the agreed fiscal exchange and they asked the men to wait for the money to be brought to the house.  The three brothers were received well and hospitably and did not suspect any ill-will but after 2 hours of waiting, Kaiman’s brothers left him with the Muslim friends at the house to go to work.
Later in the evening Kaiman’s newlywed wife, Manisha (24 yrs), called his brother Azeem to locate the whereabouts of Simon, who had not returned home by midnight that same evening, unusually his mobile phone was switched off. Azeem reassured  Manisha explaining that, before they married, Simon would often stay out late and was with his two close friends.
By 7 am the next morning, however Mozam’s neighbour discovered Kaiman’s body lying next to his motorcycle outside Mozam’s home. Police were called and they responded quickly.  After a postmortem concluded that Kaiman had been killed by repeated blows to the head with a brick, he was buried that same day as per Pakistani culture.  Police raided Mozam’s home but could not find him or Akmal as both of them had absconded and a manhunt began for the fugitives.
Police later arrested Mozam, the son of a landlord and Akmal, a Rickshaw driver, at another local village later that day after following a series of leads. Mozam later confessed to the killing saying that a fight broke out when he got drunk. Akmal claimed to have left the house earlier than the alleged incident at 1 am and states he was completely unaware of the incident. However despite claims of a fight there was no evidence of any retaliation by Kaiman.  In fact his fall position and the wounds to his head suggest he was unaware of the impending attack.
A First Incident Report (FIR) was registered at the Saddar Police Station Factory area, charges being brought against Mozam include murder under section 302 of the Pakistan Penal Code, but without a solicitor such cases cam be dropped by police authorities, due to a lack of desire to prosecute and bribery.

“I have been heartbroken since the murder of Kaiman.

“Hi cruel death at such a young age has taken his life and ruined mine – we had so many hopes for a good future after his inheritance and finding a good job, but now there is nothing left.

“I know God will not leave me this broken but for now I do feel quite hopeless.

“The man who killed Kaiman should be brought to justice he is a danger to society but our laws protect criminals with such evil in their hearts.

“I don’t know what my future holds but it is now in God’s hands.”

“This was a brutal attack on an innocent man and the impact will be one that will affect Manisha for a long time.

“Manisha had an arranged marriage and was dedicated and faithful to her husband but will now find it hard to remarry.

“The murderer of Kaimon shows no remorse, moreover his brazen attack shows how little he fears the law and we are expecting attempts to bribe the police and courts as Mozam comes from a wealthy family.

“Already Manisha and her family are facing threats from relatives of Mozam who are seeking the dropping of all charges by them paying a bribe under Pakistan’s Qisas and Diyat laws.

“Enshrined escape from brutal crimes under these enshrined Sharia diktats have destroyed the justice system of Pakistan and reciprocally created a chaotic and anarchic social climate.”

Speaking to Mehwish Bhatti, Kaiman’s widow, Manisha, has requested help to bring forward a prosecution and requested BACA’s help to hire a lawyer. The cost to a lawyer to fight the case is set at £833 via advocate Rana Ahmed Raheel.  We have paid £100 to cover the costs of a the funeral of Kaiman and hope with your help to find justice for Simon. To donate please (Klik hier)