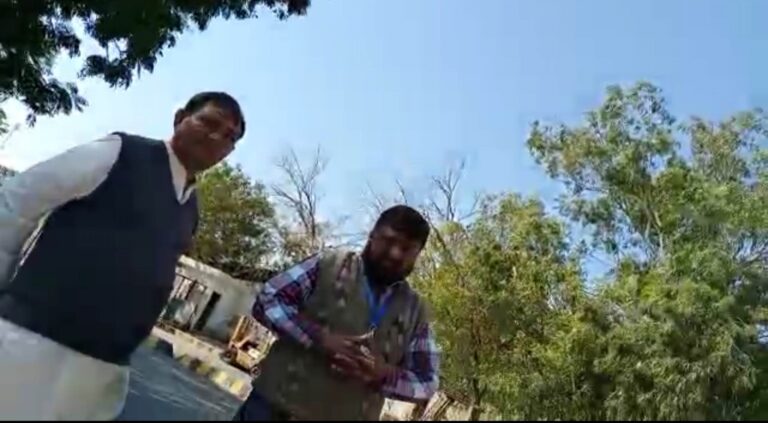 ਸ਼ੇਅਰ ਕਰੋ
ਫੇਸਬੁੱਕ ਟਵਿੱਟਰ ਲਿੰਕਡਇਨ Pinterest ਈ - ਮੇਲ
ਚਿੱਤਰ: Saleem while he threatened Samina Mushtaq taken as screenshot from video
A Christian widow who heads the Immediate Clearance Group (ICG), Cargo-Crew Security Team at Jinnah International Airport, Karachi, for Pakistan’s Civil Aviation Authority (CAA), was threatened with death or a report of blasphemy by a CAA official over a parking dispute.
Fortunately, the Christian woman’s argument with the official was recorded on a telephone and the nation’s humanitarian voices, rallied in her support.
The Senior official has since been suspended from his position as a Facilitation Supervisor after widespread Pak-media fury, based on the video evidence.
The Samina Mushtaq a mother of 4 children, has spoken with British Asian Christian Association  about her case as she pursues justice.  British Asian Christian Association are providing her with free advice from a solicitor and hope to commission the solicitor to take up the case if we can raise the costs for this service.
On Thursday, 5th January 2023, Samina Mushtaq a Christian woman who is head of IGC Security at  Jinnah International Airport, was threatened with a false blasphemy allegation over a parking dispute. The incident took place in Airport’s cargo area in Karachi, after a Muslim man named Saleem an official with the CAA, was reprimanded for allowing a friend’s vehicle past a security checkpoint, without a valid security pass.  Worse still the vehicle had no licence-plate.
When Mrs Mushtaq , confronted Saleem, he identified himself as a government employee. he seemed upset that she would question his authority and began issuing threats.  In a  video recording taken on Samina’s phone he can be heard shouting out that he would “call maulanas and get her charged with blasphemy for insulting Islam and the Prophet’.  This action is out-of-place and out-of-order, considering Mrs Mushtaq does not mention the Koran, Islam, Muhammad or any of his acquaintances during her challenge to Saleem’s breach of security protocol.

Table of relevant blasphemy laws taken from ‘On Trial: The Implementation of Pakistan’s Blasphemy Laws’ report, which can be read in full (ਇਥੇ)

he has offered to support Mrs Mushtaq  with any legal action taken against the CAA official, including testifying in court against his actions.  This support has meant no blasphemy allegation has been registered with local police against Mrs Mushtaq – she was saved by her quick wit and mobile phone.  Dawn News in Pakistan has confirmed the Ulema Council support (ਇੱਥੇ ਕਲਿੱਕ ਕਰੋ).

Mrs Mushtaq, alleges she is receiving some threats since the incident and wishes for better protection.  A car outside her home was smashed by vandals the day of the incident and this has left her family very frightened. BACA will be contacting the Pakistan High Commission to seek improved care for Mrs Mustaq and her family.  We intend to provide her with a solicitor who has already begun providing free advuce.  If you would like to donate towards the costs for a solicitor then please (ਇੱਥੇ ਕਲਿੱਕ ਕਰੋ).

“That would seem to be grounds for instant dismissal , even if we discount the fact that Karachi’s Jinnah International Airport has been subjected to a major terrorist attack in 2014 (ਇੱਥੇ ਕਲਿੱਕ ਕਰੋ).