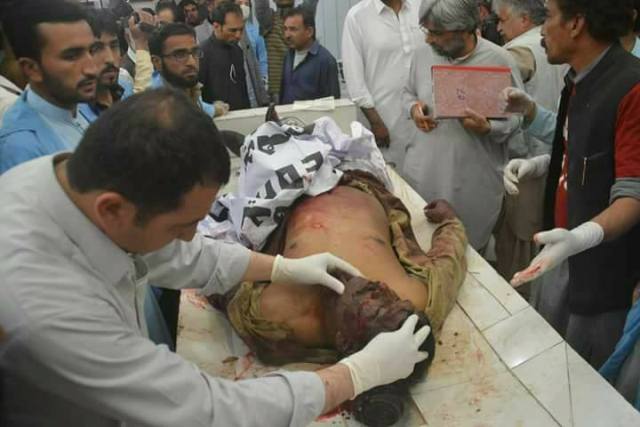 Four members of a Christian family who were visiting family in Quetta, the provincial capital of Baluchistan, were shot dead on Easter Monday – one of the victims was a woman. One young Christian girl was also injured in the attack and has been admitted to the intensive care unit of Civil Hospital Quetta as she fights for her life.

The attack happened at around 7pm (3pm GMT) when two men on a motorbike opened fire on a rickshaw containing the Christian revellers on Shah Zaman Road.  The deceased family were all going out for a meal with other family members and had only travelled to Quetta to share Easter with them.

Though no known terrorist group has yet claimed responsibility for the attack, Quetta Police have already listed the attack as ‘an act of terrorism’,  There seems to be no other potential motive for the attack.

The country remains on high alert and enhanced security measures had been provided to most churches from the period of Good Friday – Easter Monday, in order to safeguard Christians during the festive period.

Since 2007 Pakistan has been engaging in a war against terror against groups including the Tehreek-e-Taliban Pakistan (TTP) and its allies, who seek to impose a strict interpretation of Islamic law on the country.

A series of US-supported military operations have been successful in displacing the TTP and allied groups from their former strongholds in north-western Pakistan.  Though this has vastly reduced the number of attacks and annual casualty figures – sporadic attacks on a smaller scale continue to foment fear across the country.

In recent months militant outfits such as Lashkar-e-Jhangvi, have prioritised gun attacks on national armed forces, Hazaras, Ahmadis and the Christian community.

The Islamic State (IS) group claimed responsibility for the December attack via a broadcast on its Amaq news agency. That attack was the first time IS in Pakistan had been involved in a terrorist attack on a Church, which till then had been conducted by Tehreek-e-Taliban.

BPCA had forewarned the Pakistani Government of the rise of IS in Pakistan in several communications but our persistent calls for better protection of churches were ignored.

We had been receiving reports from church leaders who had received threatening letters calling for Christians to convert or face Iraq and Syria-like beheadings back in March 2015. We advised them to contact local army officials to see if any help would be forthcoming. Sadly the response from the army was pathetic and puerile. The Pak-army began to write to local churches warning them that attacks from IS were imminent and that they were purging IS sympathisers from their ranks. An article was written by Christian Today (ਇੱਥੇ ਕਲਿੱਕ ਕਰੋ)our original report can be found (ਇਥੇ).

Instead of offering protection the army in their tacit recognition of the utterly vulnerable state of Christians and Christian institutions in Pakistan, caused great panic and anxiety. Christians groups and churches felt no option was available to them, then to bury their heads in the sand hoping that the problem would go away. However, the problem did not desist, moreover IS has now built a network in Pakistan that now probably exceeds the Taliban in size and influence. The Government of Pakistan in normal fashion simply dismissed our report as an outright fabrication of no consequence. Whereas the Taliban recently warned Minorities of Pakistan to stay out of their way and not support the government of Pakistan, so as not to be targeted for terrorism(ਇੱਥੇ ਕਲਿੱਕ ਕਰੋ).  IS consider the untouchable minorities within their midst as anathema and prioritise them for their brutal machinations.

Despite the murder of a seven year old Christian boy, who was killed after a timed explosive was placed in a vehicle outside a Christian village in Quetta(ਇੱਥੇ ਕਲਿੱਕ ਕਰੋ), only a week before the attack on Bethel Memorial Methodist Church, the pleas of the BPCA backed by the mother of Isaac Masih the slain 7 year old for better protection for churches and Christian communities were ignored (ਇੱਥੇ ਕਲਿੱਕ ਕਰੋ).

“We are praying for healing for the young girl who has been injured in this attack and will be providing whatever assistance we can to the family involved in this tragic incident.  It is heart-breaking to think that this poor child – if she survives – will have lost her immediate family.

“We pray for peace in Pakistan and an end to the pariah status of millions of Christians who are persecuted for simply adhering to the tenets of their faith.

“Christians face a torrid time in Pakistan their lives are under constant threat from extremist terrorist groups and people in their community severe prejudices that can lead to blasphemy charges an equally fatal consideration.

“Western nations continue to ignore their plight resulting in a huge death toll over the last decades as Pakistan’s society has become increasingly polarised a result of years of inculcated hatred via the national curriculum textbooks that knowingly demonize and caricature minorities (ਇੱਥੇ ਕਲਿੱਕ ਕਰੋ) , even going as far as labelling Christians as spies for the west.

“Christians find themselves at the worst end of society with millions stuck in slavery or undertaking sewerage and cleaning jobs commensurate with their untouchable status.

“The Government of Pakistan must renew efforts to protect Christians and other minorities through changes in law, better scrutiny of their statutory services in a drive to remove prejudice, improvements to the educational system in particular the national curriculum which should highlight the contribution made by minorities rather then baselessly condemning them and by increasing minority representation in the political and legal system.

BPCA has launched and appeal to help the victim family that will help pay for funerals, for treatment for the child and any long term care she may need through any appointed Guardian.  If you would like to donate please (ਇੱਥੇ ਕਲਿੱਕ ਕਰੋ)

Church leader calls on UN to “recognise genocide against Christians”