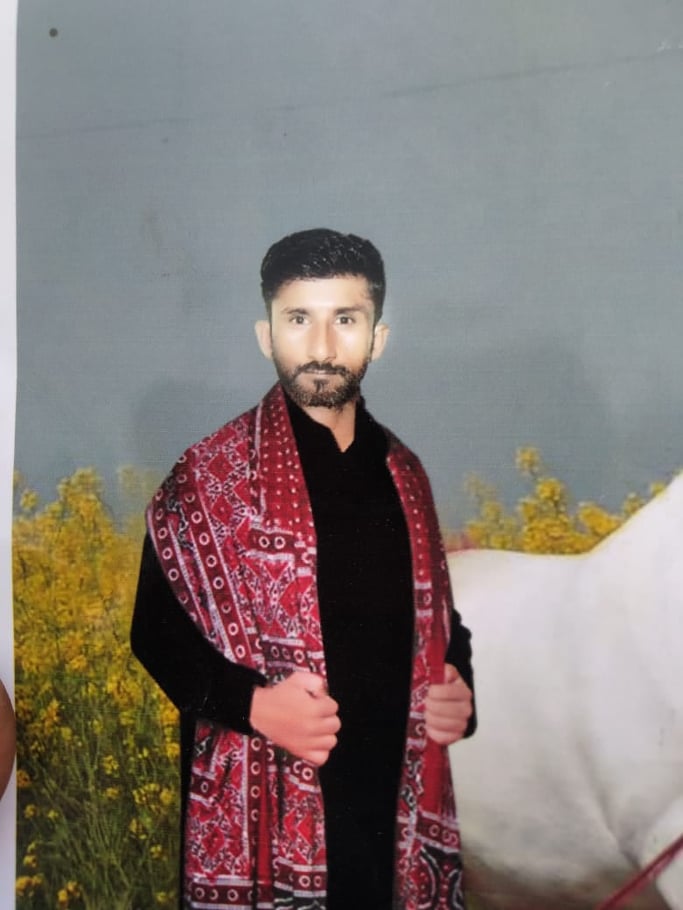 A  35 year old Christian labourer known to be a hard worker was killed by two Muslim neighbours who burst his intestines by inserting high pressure air into his anus (ਇੱਥੇ ਕਲਿੱਕ ਕਰੋ).  Two other men were initially implicated in the murder but cases against them were dismissed, following police and court review of CCTV  recordings.

It is believed that before he died Shehzad Masih was sodomized by the two Muslim men.

The brutal use of high pressure air in such sickening fashion is believed to be have been an attempt to hide a sexual offence the men committed.

British Asian Christian Association, has funded a legal prosecution of the murderers since the incident in July 2021.  On 15th November 2021 following the rejection of a post-arrest bail for one of the murderers our solicitor believes we are nearing a successful conviction.

The murder of a Christian man by two Muslim friends after a brutal act of sodomy left his family devastated.  British Asian Christian Association were the only group to offer any help and assistance. We immediately secured the services of a legal advocate for them and began the challenge for justice through the Faisalabad court system.

The owner of the business Mr Mohammed Asad and Muhammed Faisal who had tried to avert the course of justice by lying about the reasons for Shehzad’s injuries and by impersonating a family member in hospital, achieved pre-arrest bail on 29th June 2021.

In court on 9th July after Police confirmed in their report that CCTV evidence obtained from the factory at which Shehzad worked, led them to believe both these men were innocent of the murder as they were not present during the attack.  The Police will not be pursuing them for pretending to be a family member in the hospital and other attempts to thwart discovery of the culprits. In fact police exculpated them (formally declared them innocent of any crime).

However, the same CCTV evidence proved the other two men were in the building and a report submitted by Medical Officer Dr. Zain Umer, from Allaid Hospital Faisalabad confirmed that the death of Shehzad Masih was caused by insertion of pressurized gas into Shehzad’s anus.  The force of the gas severely damaged the large intestine of the victim by causing large perforations.  It is believed the septic shock causing the death of Shehzad Masih after the wound became infected.

On 20th August the investigating officer from the police SHO Muhammed Tariq presented a report to Faisalabad District Court, which included the statements of eye witnesses.

Muhammad Abdullah then submitted his NADRA records at Faisalabad District Court on 28th September 2021. These confirmed that he was a Juvenile.

On 5th October a murder charge was then framed against Muhammad Abdullah as a juvenile, by Additional Sessions Judge Muhammad Shehzad Ahmad.

We spoke with Shareefa Bibi (64 yrs) mother of slain Shehzad Masih, she said:

“These men did filthy evil things with my son and then pushing the nozzle of an air-pump into his anus.

“They are disgusting and vile.

“My son went through terrible pain and injury and though we are nearer to getting some justice, I can never get my son back in this life.

“Every day that I live I feel anguish for my lost son – I feel empty and hollow.

“I hope these men are jailed for life so that they cannot cause such pain to any other families.”

“Charges have been framed and I am hopeful of a speedy trial from here on.

“The culprits will find it extremely hard to escape justice when there is so much evidence that they are guilty.”

ਟੀhe case is being trialed in the Faisalabad Court of Additional Sessions, presided over by Judge Muhammad Shehzad Ahmad. Already under interrogation by Faisalabad Police, Muhammad Abdullah that Mohammed Faizan had held Shehzad Masih while he inserted the pressurized air nozzle into Shehzad Masih’s Anus.

On 20th October, Muhammad Abdullah filed a Petition No.445-4 in the court of Muhammad Shehzad Ahmad for a post-arrest bail through his counsel Mirza Muhammad Tahir.

On 23rd October, two of the chief witnesses Gulzar Masih (31 yrs) and Irfan Yunas (30 yrs) gave their statements At Faisalabad District court.  When the defendants were called to stand at the dock for cross examination by the judge their counsel, pleaded for more time stating that he had not yet completed studying the case documents.

On 30th October, the court granted the post-arrest bail to Muhammad Abdullah on the grounds that the investigation regarding him is complete and he is no more required for further investigation. However he has been declared a juvenile offender and pivotal questions regarding his intent and knowledge of committing the murder of Shehzad Masih, shall be scrutinized at the trial.

On 15th November, Muhammad Faizan also applied for post arrest bail through his counsel Mirza Muhammad Tahir.  This was denied by the court  on 18th November 2021 after hearing the arguments of complainant counsel Miss Tallat Taswar Rana (paid for through your donations).

“Charges have been framed and I am hopeful of a speedy trial from here on.

“The culprits will find it extremely hard to escape justice when there is so much evidence that they are guilty.”

“Before we began our work in Pakistan in 2009 cases like this would never had gone through court.

“Nearly every murderer of Christians was set free. [Qisas and Diyat Laws introduced in 1990 mean that murder and rape cases are no longer trialled as State v Culprit (ਇੱਥੇ ਕਲਿੱਕ ਕਰੋ)]

“Usually by paying a bribe after forcing families to accept through threat, loss of frightened witnesses, or because lack of a solicitor allowed biased judges to postpone and eventually drop trials.

“We now provide safety and advocacy for families that redresses the balance.

“We are seeing an increasing amount of success in fighting these cases in recent years especially under the regime of PM Imran Khan.”

“We will step up our programme of legal support, as every legal precedent we secure strengthens the safety of Christians and other minorities living in Pakistan’s unequal society.”

British Asian Christian Association is paying significant funds in protecting this and many other Christian families in Pakistan.  We cannot continue this work without your support and pray that those of you moved by the tragic account in this article will help us continue with an affordable donation.  If you wish to donate towards this endeavour please click her for a list of payment options (ਇੱਥੇ ਕਲਿੱਕ ਕਰੋ).