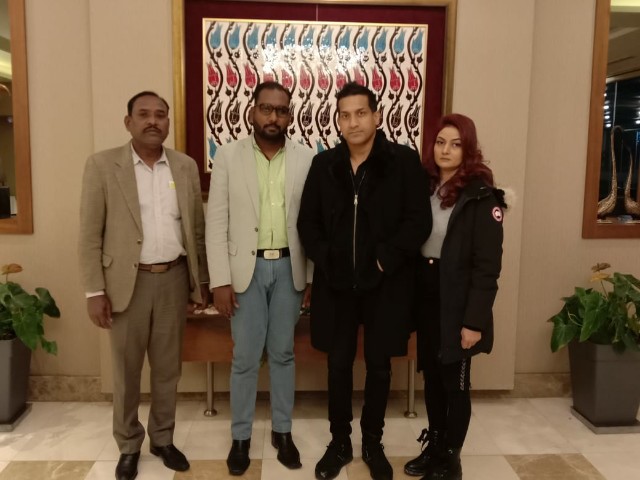 Vikram Alvin whose eye was severely damaged during an assault by a violent mob in Sept 2018 was recently in Turkey receiving medical care paid for by British Pakistani Christian Association, but doctors were unable to restore his sight

On the 18th August 2018 a 2nd year chemical engineering student and resident of KDA 2, Mehmoodabad, Karachi, was beaten so badly by a mob of young Muslim men accompanied by an Islamic cleric, that he lost his sight. The mob using rods, clips and stick to beat the young man then stoned him outside his home.

Following the attack, Vikram and his family had to be moved to a safe house and hidden in a secret location due to serious threats to their lives.

The brutal attack left Vikram Alvin severely injured with blood clots behind his eyes that have left him unable to see. Doctors have said that they do not expect his sight to return. A visit to one of Pakistan’s best hospitals Aga Khan said that the only hope of recovering the function of his eye was in Turkey, or Malaysia where they could get the proper surgery to save Vikram’s vision.

BPCA found a doctor at a hospital in Turkey willing to assist Vikram but it was only after a three month delay he acquired the proper medical visas.  BPCA took care of travel expenses for Vikram and his father Alvin John and were extremely hopeful that sight could be restored to his damaged eye. However after such a long wait including several delays in travel due to court hearings that had to be attended by the family the prognosis had changed.

The doctor’s report says his eye was beyond saving.

All of the upheaval in Pakistan this fall, meant that getting visas, and securing this much needed medical treatment, was out of reach, until just recently. After such a long wait the doctors could only offer cosmetic solutions and reducing the risk of future infection by fitting, Vikram for an artificial eye. Our Pakistan Officer accompanied the father and son on their journey and this was a disappointment.

After some consideration and in consultation with his family. Vikram decided against further surgery at this time, and decided to believe God for his healing as a pastor in Pakistan had prophesied complete restoration . Wilson Chowdhry, and his wife Juliet Chowdhry met the two men in Istanbul to offer their support and though they wished that the cosmetic surgery they accepted his decision and continue to pray for the family.

“I am very thankful for BPCA bringing me here and allowing me to have the best possible advice under the circumstances. It have been very difficult to deal with this attack, and all the ramifications, including the impact on my studies, and the need to flee our home. I am not ready to give up hope.”

“What has happened to Vikram at the hands of his persecutors has changed his life. The loss of his vision in his left eye has impacted on his appearance and his ability to function safely in the workplace.

“I was glad to be able to be able to come with my wife, Juliet to offer our support and encouragement. We will continue to pray for Vikram and for his future prospects.”

1000 families forced to flee their homes after a fourth teenager has been arrested for blasphemy – matter may simply be cricketing rivalry!