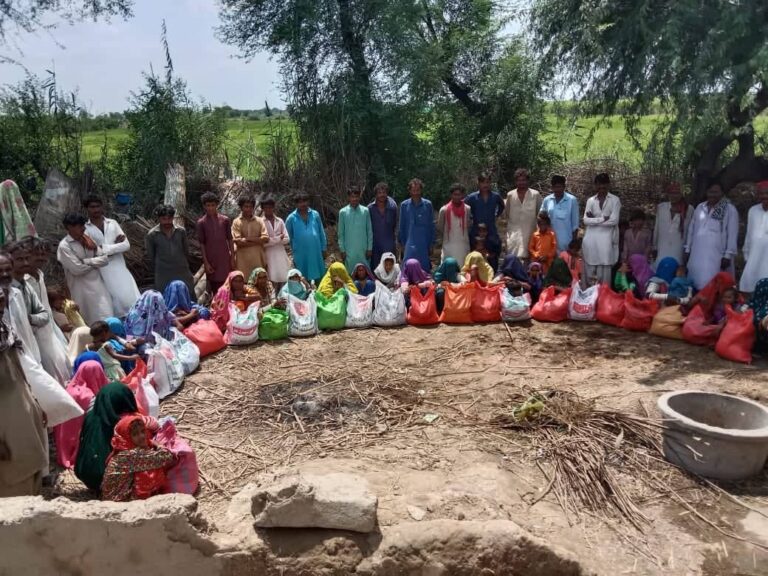 Pakistan has been ravaged by the worst monsoon flood that they have had in their recorded history. The size and scale of the disaster shocked the nations leaders.

Listen to TWR Radio report on Pakistan by clicking the link below:

You will need to enter your name and email to register with TWR Radio but the service is free.

33 million people have been affected by deadly flooding across Pakistan.  Since the monsoon season began in mid-June, more than 1200 people have been killed of which 400 were children.  It has been estimated that 364,000 people were displaced by the rapidly rising water levels.  1.1 million homes were washed away and countless homes were damaged.

The United Nations (UN) reports that more than 100 bridges and 3000km of roads have been damaged or destroyed.  They also estimate that 800,000 farm animals have perished, and two million acres of crops and orchards have been devastated.   مزید پڑھ (یہاں)

“The West therefore has a responsibility to support the country and prevent future events.”

Pakistan is facing “a monsoon on steroids”, the UN’s secretary general Antonio Guterres has warned, after floods submerged a third of the country. He urged the world to come to Pakistan’s aid as he launched a $160m appeal to help the tens of millions affected in the disaster.

Pakistan has had many large chaotic deluges in that past but there is a clear link to climate change. Global warming causes more water evaporation as sea and air temperature rises. Warmer air also carries water better and longer and this contributes to the increased rainfall.

The Sindh and Balochistan are generally known as arid areas in the southern parts of Pakistan. Though Sindh is less affected than other parts of Pakistan and less frequently, Balochistan is not usually affected by the serious floods and hence the impact of this years flood has been felt greatest there.

Communities in Balochistan were just not prepared for the scale of the floods this year. Near the city of Quetta Churches and Christian communities suffered in the early wave of the floods in July.  Around 33,000 Christians live in and around Quetta most of them in extremely deprived villages in homes made of mud. Many lost their homes and livelihoods they would have in the main been collectors of wheat, cotton and other agricultural produce. The majority of Christian villages are close to churches and many of the most deprived are built in narrow valleys hemmed in by rugged mountains where water swell naturally flowed into these communities.  Churches and schools had to shut down and many bridges were destroyed, disconnecting people from work, families and support.  Many who lost their homes took shelter in the larger shelters of churches higher up and in the city of Quetta or with family and friends who lived in areas better protected from the inundation.

In Sindh a very remote Christian community that we helped with food, tents and mosquito nets in 2020, have been totally devastated by the recent increase in rainfall during August.  They have lost their homes, possessions and money in the floods, which have all been washed away. These families eked out an existence collecting wheat and cotton for a pittance (less than £2 a day) and found themselves sleeping without cover on the streets of the nearby town (4km away) as it was on a hill and less affected by the inundation.  So around 150 people sat in the pouring rain without any cover– many of them were children. They stayed there for over 40 hours until the rain stopped and some of the water dissipated.

Without phones these frightened Christians could not call for help, and service to phonelines did not return for 5 days. At this point the community contacted us and we were able to send money via Jazz a national money transfer company, meaning they could buy food.

Prior to this families survived by taking food from shops  on promise of a payment later. Obtaining food in this way became more difficult as days went by, and these Christians were near starvation by the time we were able to assist.  Read more see images and watch videos of our flood relief (یہاں).

Villagers have told us that the men were ready to sell them selves into slavery to feed their families – so desperate had the need for food become.  Their current employers will not let the men work for anyone on threat of losing their jobs even though pay was ceased as crop fields have been washed away. Even then women and children are now seeking work as domestic cleaners especially as all local schools have been shut down.  We aim to continue the food programme for as long as we can afford to up to six months.  By which time these families should have found new ways to survive.

Today (3rd September 2022) we begin work on a new clean water pump for the Christian community.  As their previous pump was destroyed in the floods and now they are having to walk over 8 km to obtain safe, clean water.  If we raise enough to build a public shower and toilet facility we aim to help this community with a project to protect girls and women from reported rapes and murders in the area. The project will also restore dignity to a community using fields as toilets and makeshift shower cubicles made of cloth inside their houses.  A medical camp is to be set up in this community to serve 60 Hindu and Christian families this week. The qualified medical staff will be investigating the large number of residents from this community complaining about fevers, dysentery and skin conditions.  Full health checks will ensue and monitoring for waterborne illnesses such as typhoid, Cholera, Dengue fever and water-related illnesses such as Malaria.  You can donate to this project (یہاں).  We also aim to rebuild mud homes that have been washed away with new brick-made secure homes on flood plinths.

There was no option for these Christians to travel they could not afford it and it would have been extremely dangerous.  Most have no relative nearby and have struggled since the floods by  living in dirty, damp homes (till they dried) that are bereft of any walls.  Some sheltered under trees using  sheets hung over local trees or makeshift tents made of cloths, that they have not yet paid for.  A few had tents that they had from when we last visited this community in 2020.

This community derives from former Hindus and while we began helping them we also then helped an equivalent-sized Hindu community.  God calls us to be Samaritans who help all in need, irrespective of their background.

Christ explained that Christians are expected to love all without exception. The parable of the Good Samaritan guides our work and we have also been providing aid to Hindus.  We have been undertaking food drops to the Hindu Community through locally based Pastor Musa.   Since our last report we have now  given food supplies to 30 grateful Hindu families.  Many of them are relatives of the Hindu converts who are now Christian and Pastor Musa has shared how he has prayed with several families and had the chance to share the Gospel – though this was never forced.

We are now hearing from a Christian Community in Charsadda in the state of Khyber Pakthunkwa and from two Christian communities in Eastern Punjab one named Taunsa and the other Rajanpur.  We will be offering them all assistance in the next few days and will provide more details soon.  We expect to be in touch with more affected Christians as access to phones and further phone services resume across the country.  Please pray for the safety of all those affected by the recent deluge.

Churches across Pakistan have been praying for the rain to cease and for respite for the people affected.  Many churches have been collecting food and blankets for those who are in need and that help is irrespective of the faith of the flood victim. Most of the help is focusing on the needs of those suffering around them and much like Government responses this effort is focused in and around the cities. Villagers are having to travel to the cities to get help, as it has been too dangerous for aid workers to go to vulnerable village areas now listed as disaster-struck areas by the Government.  Many villagers have had to make an arduous walk of many miles to get the support they need to survive.  Below we share images of the 40 flood victims including Christians and Hindus being sheltered, fed and cared for  at Charsadda, by Pastor Sharjeel of Christchurch and BACA is contributing to the cost of food for these families.: 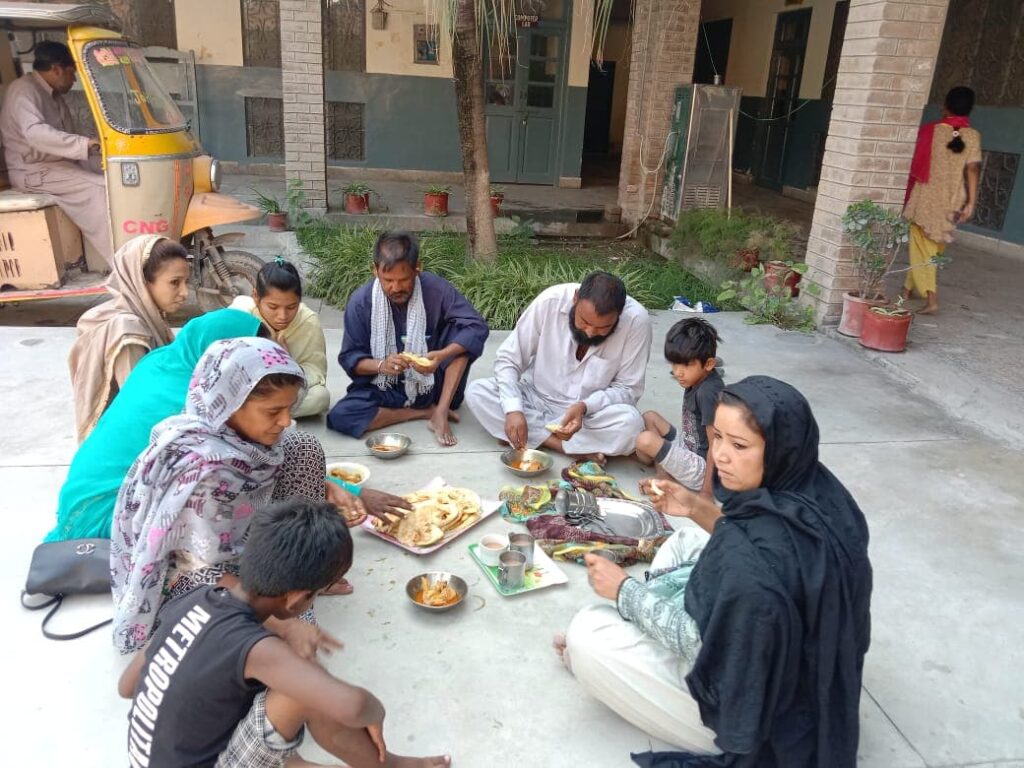 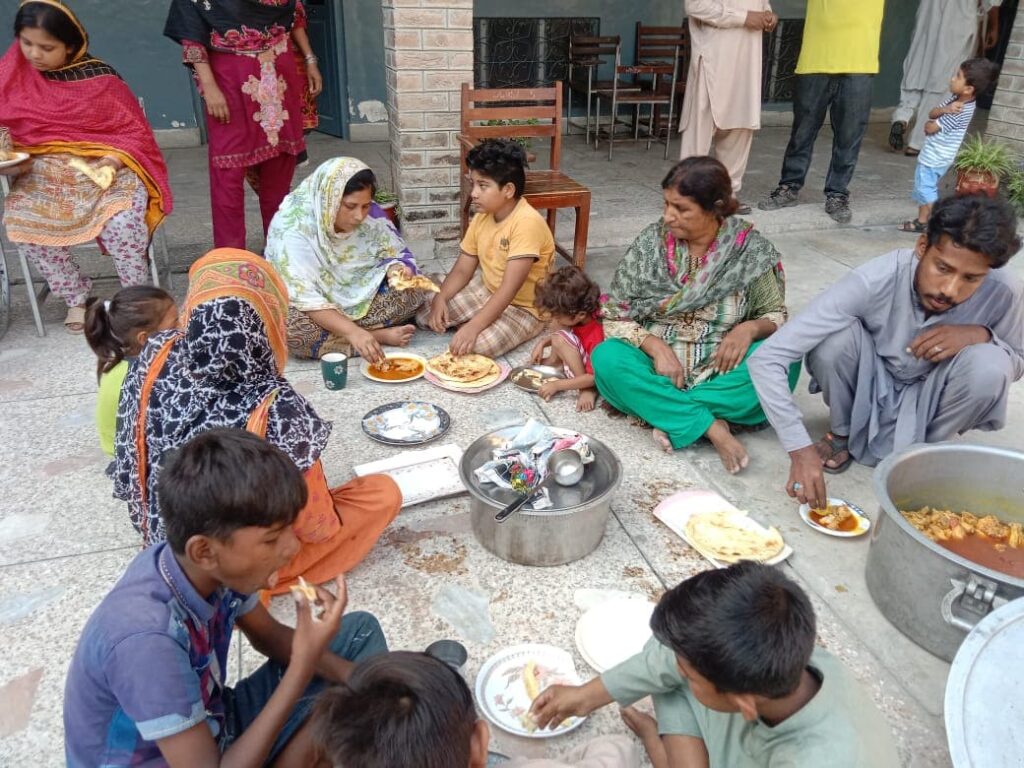 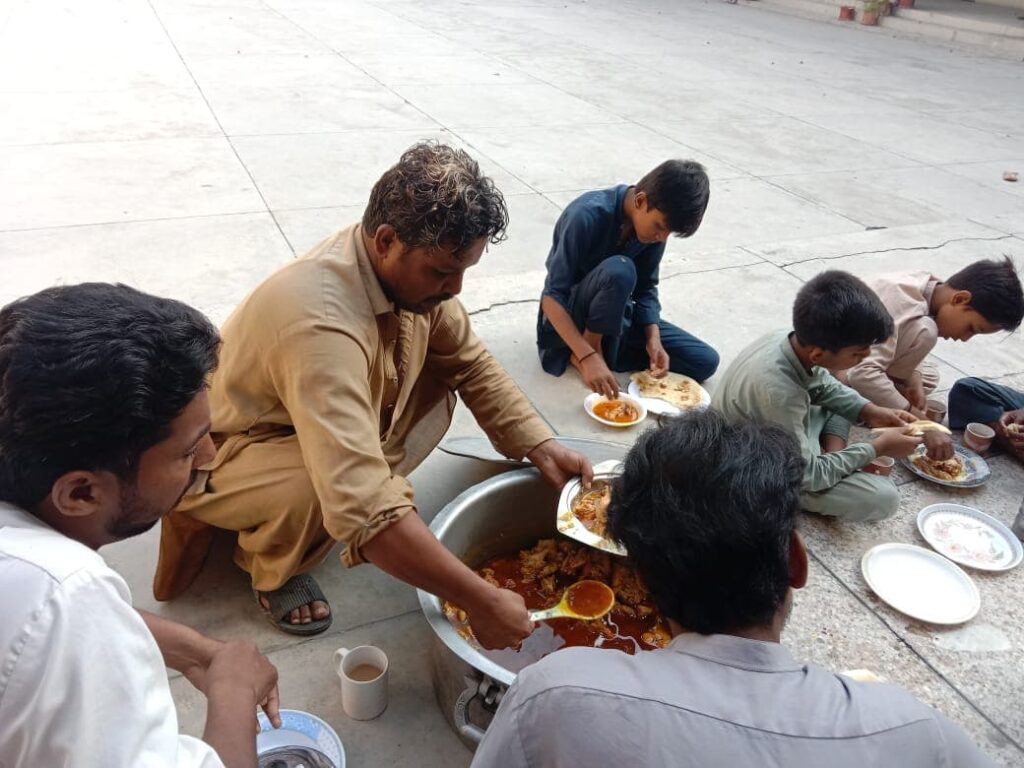 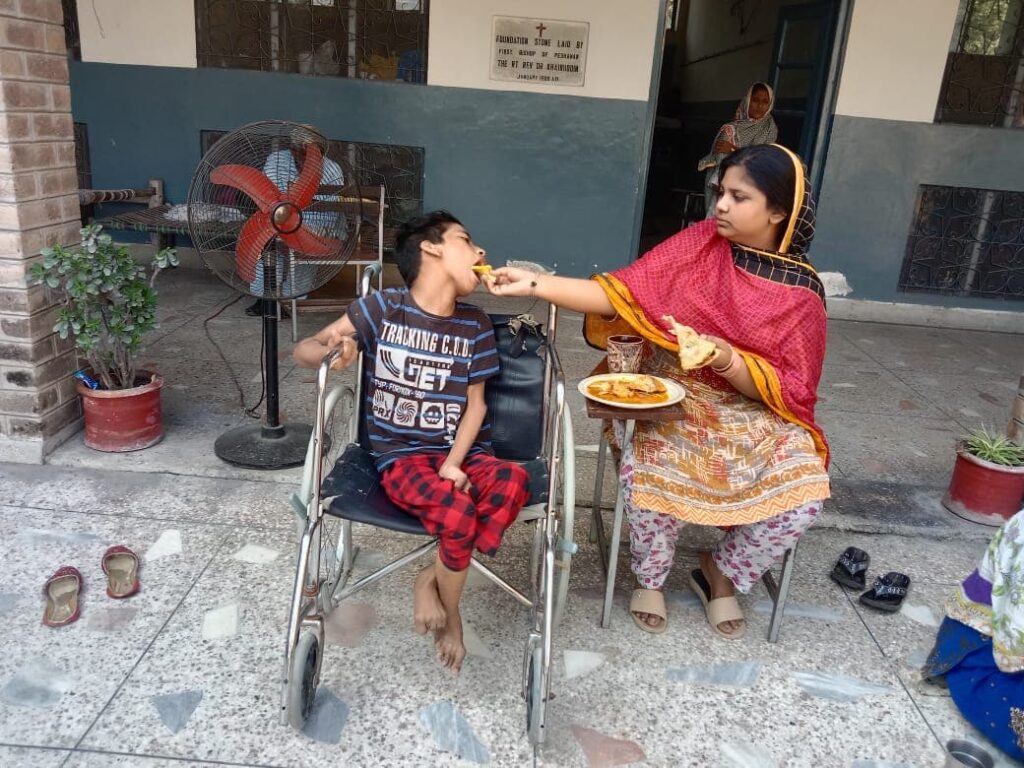 “The response of the Government of Pakistan and emergency services has been usual.

“Our nation cannot cope with a normal monsoon, of course they cannot be  expected to cope with this inundation.

“Let us be clear here, emergency services in any western nation would struggle to cope with the scale of such floods.”

But this is not an excuse that protects the Pak-Government from reproach.  Despite several previous major deluge disasters nothing has been done by Pak-authorities to improve the existing dam structure to control water surges. Early warning systems are few and far between and have limited effect villagers have very little access to communication of floods and inevitably suffer greatly. The failure to build diplomatic relations with India prevents coordinated release of water from Indian dams which would cause less impact in Pakistan.

Moreover, it is a poor indictment on the nation that the poorest communities live in areas prone to floods with out any flood protection infrastructure.  These poor communities continue to live in homes made from mud a practice that became extinct in Europe during the middle-ages. Absolutely no effort is being made to create safer, more secure, affordable homes for those caught in such abject poverty.

“Global warmth has risen by 1.2 degrees this flood has been in the making for some time.

“World leaders are aware that they are failing to meet agreed environmental targets and that their failures will impact most in countries identified by the ‘UN as global climate crises hotspots’.

“It’s often forgotten that though Pakistan is known to be have a hot climate, it holds the largest number of glaciers outside the polar regions.

“With a 15% greater likelihood of human-induced climate change deaths in hotspots like Pakistan the west needs to recognize its duty to make a change now.”

In 2018 the top ten Greenhouse gas emitters in the world contributed over two thirds of global emissions, which included China, US, Europe India and Russia. Pakistan is one of the smallest emitters yet suffers so greatly for the actions of other nations.

India also has a poor history of dumping their dam water without coordination or warning to Pakistan authorities, causing exacerbation of deluge issues there. مزید پڑھ (یہاں).

Though the Indian Government has increased its dam capacity in recent years (یہاں کلک کریں)، Pakistani’s are still bracing themselves for the impact of their next release of water.

Pray for global leaders to work together in an unprecedented way to reduce climate change.

Pray for those suffering in Pakistan may God strengthen them through these difficult times and meet their daily needs.

Pray for better relations between India and Pakistan that the release of water from Indian dams be better coordinated to reduce water swell in Pakistan.

Pray for a seed change resulting in Pakistani Authorities improving their governance and create safer stronger homes, facilities and infrastructure for the most poor in Pakistan.

Images below:  Some of the Hindu families we have been helping in Goth Ibrahim Khan. 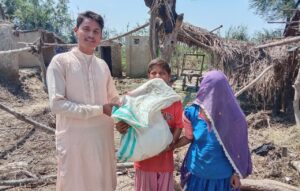 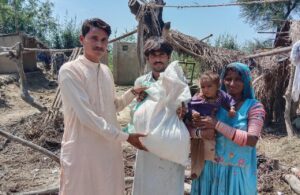 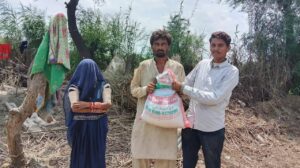 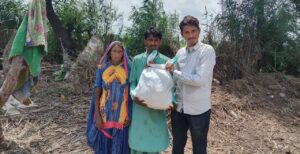 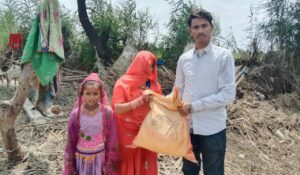 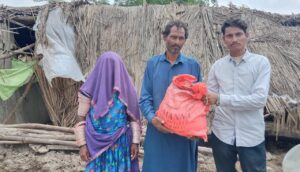 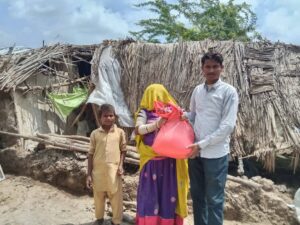 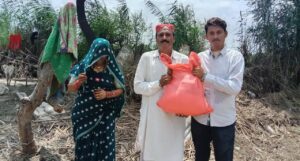 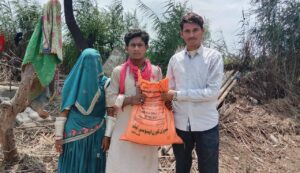 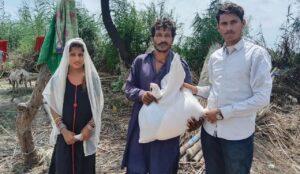 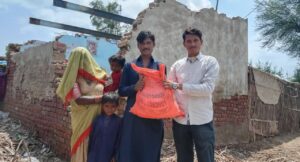 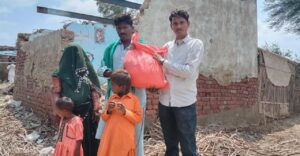 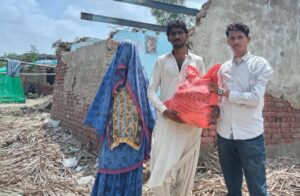 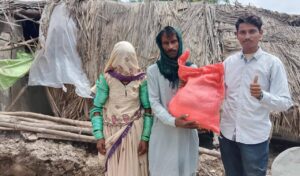 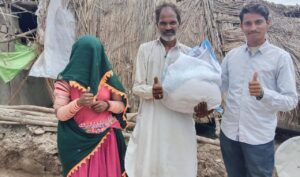 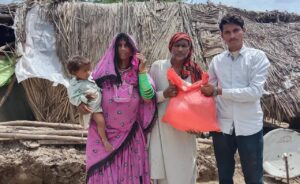 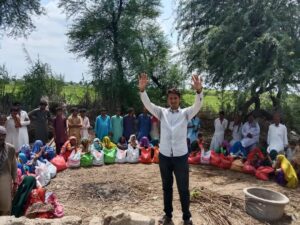