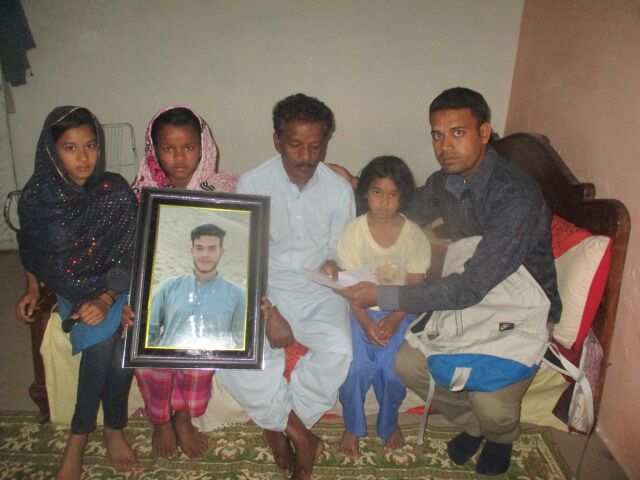 BPCA Quetta based representative Pastor Adil visited all the families of the victims of targeted killings over Easter 2018 and the week following, when shooters on motorcycles targeted celebrants in Christian neighbourhoods .

“It was hard to console the grieving families as they were very much still in deep sorrow and fear. The government of Pakistan has yet to offer any support or compensation to those affected by this targeted attack on the Christian community.”

“These targeted attacks on known religious minorities such as these Christian communities and gathering places are the Pakistani authorities’ canary in the mine. The terrorists enacting motorcycle shooting want complete societal control. The dangerous message of these attacks is clear; when the most vulnerable members of society are targeted, the waters are being tested to see how they the authorities will respond; When there is no forthcoming action, those same perpetrators are emboldened to go after the authorities themselves. Because the rights of the minorities are violated, there is a breakdown of the rule of law so that when the terrorist’s disrespect for the law will increasing become more direct when left unchallenged with police action to stand up to them. It is a sad state of affairs when the police, who are themselves oft the target of the same killers, still disregard similar attacks on defenceless citizens. We will continue to reach out and help those targeted in any way we can.”

Our officer visited the family of Rahib (19) who lost his life when a gunman on a motorcycle opened fire. His family consists of his parents and three sisters, who are now left with their brother to seek their welfare. Rahib was the only son of his parents and was the student in 1st year college.

Rahib’s father, Khalid Masih is unable to work much due to his diabetes and is a part-time private cleaner in a company, so Rahib supported his family by driving the school van and was doing his college studies privately. Pastor Adil visited the family to pay the funeral compensation and to pray with the young man’s family.

All three sisters of Rahib, Rijah (14) Merab (12) and Aina (7) are students. His grieving father needs financial support so that her daughters can continue their studies. The minimum support they requested is of £45 to pay for school expenses of three of the girls on monthly basis. Rijah shared that:

“My brother Rahib was a very caring brother and had big dreams for his sisters. We miss him so much and there is not a single moment since Rahib death that we have not remembered him.”

Pastor Adil also visited the home of the late Azhar Iqbal who was 20 years old and also a 1st-year college student. Pastor Adil prayed with the family and paid funeral compensation. He was the youngest of three brothers and was a passionate bodybuilder. Nayyar Iqbal (25) eldest brother of Azhar told BPCA:

“Azhar was the most loved son by mother. Due to his death, my mother is going through trauma. I request BPCA to remember my family in prayers.”

Pastor Adil also paid a visit to the home of the late Pervaiz Masih where our officer met with our departed brother’s children and wife. To read more about the attack that shattered this
family (یہاں کلک کریں)

Pastor Adil prayed with the family and paid funeral compensation. The widow of Pervaiz Masih has requested to help her pay the school fee for her only son as he goes to a private school. She needs the support of £30 a month to pay the school fee. All other children are studying in a government school.

Pastor Adil also visited victims who got injured during the targeted killing. He reported:

“Thanks to God those who were injured all are greatly improved and are safely discharged from the hospital. BPCA paid medical compensation for all of them.”

This includes Sunana Shakeel (10) who was hit by bullets on both her legs. She remained hospitalized for 15 days at Military Hospital Quetta and now thankfully is back home. BPCA helped the family with the medical cost of injections which the government didn’t cover. The family of Sunana were thankful for the quick support from BPCA.

Pastor Adil visited Mehwish William (19) who has been deaf and mute since her birth. She got hit by the bullet in her left leg. She remained hospitalized for the 10 days. She is recovering, her wound is healing fast and is doing much better now. BPCA paid the medical compensation and prayed with the family.

Pastor Adil visited Samuel Masih (38) who is the only breadwinner of the family. He got hit during the targeted attack when the bullet passed through his neck from the back of the neck from the front. He was admitted in the hospital for the whole month. BPCA paid his medical expenses. Samuel has two sons. He is a labourer by profession and is doing much better now.

BPCA Representative Pastor Adil prayed with and plans to give regular visits to all the families.

BPCA will continue to assist the victims who continue to recover form their trauma and injuries and the families of those slain who have been left in financial distress and if you would like to give a donation please (یہاں کلک کریں) to contribute to their ongoing care and support.

Image taken outside Seven Kings Station only hours after the attack. An attack by one…