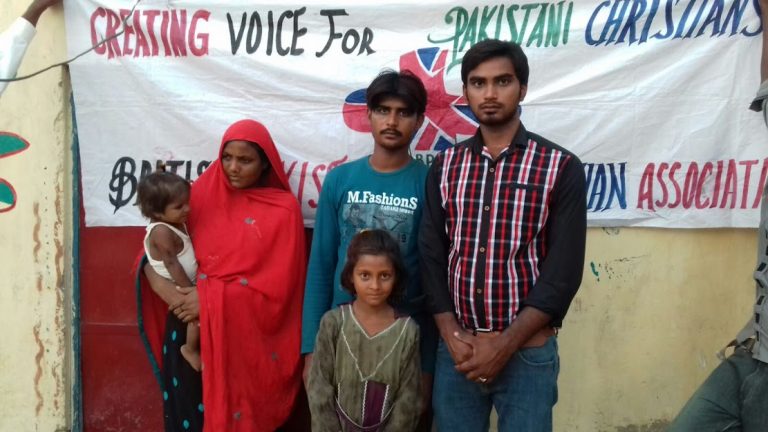 A Christian man who has had to relocate his home and spent 3.5 years fearing a long tme in prison for a blasphemy charge has been acquitted by Session Court Judge Ijaz Ahmed Basol (15th January 2019), presiding over the case at Kasur Session Court.

In an historic court procedure Pervaiz Masih the accused blasphemy victim was released on bail after serving only 20 days in prison. The family were relocated to a place far from the incident location and continued to battle for the exoneration of the innocent man. Aneeqa Maria the family’s lawyer spoke to BPCA, she said:

“While Pervaiz Masih was in jail awaiting a decision on his bail his wife, who was relocating to a safe house, informed me of the death of her daughter in a a water well.

“It was believed that the girl had fallen into the well and died accidentally until during  a threat made by the friends of the accuser stated that they had killed Pervaiz’s daughter Sanum who was only 3 years old at the time with a message that it could happen to other members.”

“Though the family are happy today because Pervaiz will no longer face prison their life has changed drastically having had to leave their family home and away from friends and family for their safety.  No justice will ever come for Sanum and Parvaiz’s wife Zareena who was once beaten by enemies of Pervaiz which has left her unable to walk with a straight back.”

Today’s verdict is the first time in Pakistan’s history that an exoneration occurred at district court level, where session court judges are prone to capitulation to the whims of incensed mobs.

“God has made a way for fredom for this family that will open doors for many others in the future.”

Pervaiz Masih a self-employed construction worker was accused of blasphemy for saying insulting words against Islamic prophet Muhammed on 3rd September 2015, after a heated argument with a rival Muslim contractor. Until that date he had been a long time resident of Gahary Wala Kasur District.

Earlier in 2015 Pervaiz had won a contract with a wealthy Muslim brick kiln owner which infuriated a local Muslim businessmen Haji Jamshed, who had failed in securing the contract for himself. Am embittered Haji Jamshed accosted Pervaiz while he was working and later Haji Jamshed alleged that during the heated discussion Pervaiz had committed a blasphemy, which he reported to the local police after consulting with his local mosque leaders.

The police responded to the blasphemy allegation by registering a customary FIR and later arrested a frightened Pervaiz at his in-laws’ home in Khundiya who had been completely oblivious to the warrant for his arrest till informed by his brother-in-law Shamun Masih.

Whilst searching for Pervaiz, the brutal Kasur police arrested several members of Parvaiz’s family – a common practice in Pakistan. Pervaiz’s mother in law, brother in law Shamun and his wife were arrested and told BPCA at the time that they were badly beaten at the local police cells and threatened with worse treatment unless Pervaiz was arrested.

Initially Shamun was released so he could visit Haji Jamshed and ask for his forgiveness, however Haji Jamshed who was obviously desperate to win the building contract, told him that there would be no forgiveness for a blasphemy against Muhammed only death. Shamun informed Pervaiz together they agreed that they would organise Pervaiz’s arrest from his home to prevent him from being killed by a mob which was forming On 3rd September Pervaiz Maish was arrested at his house, which resulted in the immediate release of his family members.

Pervaiz has a wife Zareena who has a minor disability and four children; Amir (8 Years), Praim (6 years), Sanam (3 years) and Anmol (only 7 months).

“This was a pre-planned attack and was discussed in the local masjid (mosque) by Muslim Ulemas (leading clerics), They wanted to put fear in the local Christian community and led the business rival of my brother into placing a blasphemy allegation against him.”

Other residents suffered bullying and searches of their family homes as a mob sought Pervaiz so they could lynch him. Many of the local Christians felt so intimidated and under threat that they fled their homes to stay temporarily live with relatives. On their return home they community discovered that their properties had been vandalised and looted.

During major floods in August 2015 many Christians in Kasur were forced to sell themselves into slavery after the inundation devastated crops, their only source of income (یہاں کلک کریں).

“News of the release of Pervaiz Masih was met with great joy by staff at the BPCA and we thank Aneeqa Maria and her team at the Voice Society for making this happen.

“BPCA were one of the first charities to help his family and supported them financially while their main breadwinner was incarcerated.

“Today Pervaiz no longer need fear long-term imprisonment but due to the harmful effect of a blasphemy allegation, they will have to live in the shadows.

“Justice is relative in Pakistan and is nearly always soured by the desire for community retribution a facet of a society riven by the side-effects of a toxic-ideology.”

“The exoneration of Pervaiz Masih is for definite a day to celebrate, but we must not get complacent.

“We are aware of 17 further Pakistani Christians incarcerated in Pakistani cells making up nearly 50% of the 40 blasphemy victims across the country.

“It would seem to us that either the percentage of Christian blasphemy convicts has increased or that Christians are finding it more difficult to be released.

“Either way the figures shed light on a clear targeting of Christians who make up less than 2% of the population.

“Pakistan is the recipient of large amounts of foreign aid budget yet has has failed in protecting the minority faith communities living there.

“The blasphemy laws and other human right abuses have placed Pakistan 5th on the Open Doors World Watchlist which monitors Christian persecution and it is time their place on the international stage was reviewed.

“If nothing else western nations should cease funding Pakistan until a clear change in the standard of living for minorities materialises.”

We list 16 blasphemy victims including Pervaiz Masih at the end of this article which you can use for prayer lists (یہاں کلک کریں) .

Two more can be found in this article (یہاں کلک کریں)