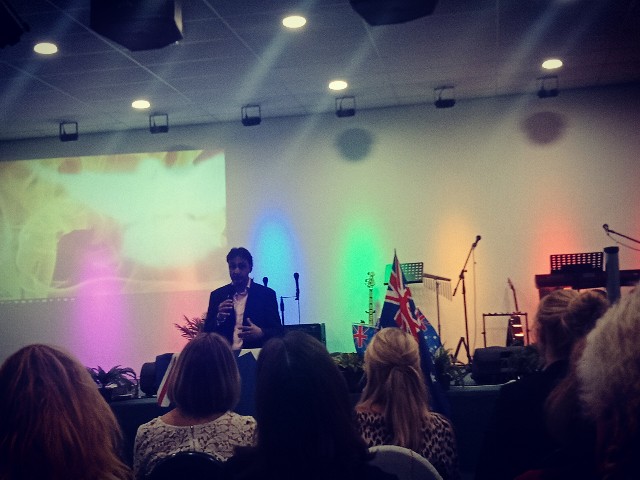 Nissar Hussain recently joined Wilson Chowdhry and the British Pakistani Christian Association (BPCA) to travel to Australia to promote awareness for the plight of apostates. Hussain has one of the most compelling testimonies of survival against great odds at the hands of those who wish to thwart the freedoms we treasure in our liberal democracies.

British born (with Pakistani origins), Hussain converted from Islam to Christianity when he was roughly fifteen years old. Conversion can be an incredibly risky decision when it comes to Islam and many apostates can identify with Hussain’s plight. The details of Hussain’s harrowing ordeal are frightening but in brief, Hussain suffered years of persecution after finding the Lord. He was rejected by his family and when he made the mistake of confiding that he was a Christian to his best friend, the friend decided to tell other people and this exposed Hussain to extreme hatred and persecution.

With a young family in Bradford, UK, Hussain became extremely concerned when the persecution escalated countless times to violence. He had bricks thrown through his windows, bricks were thrown through his car window numerous times and the vacant property beside his house was torched alight to scare him into leaving. Furthermore, local Muslims would taunt him and his family outside their home on countless occasions. All of his calls for help fell on deaf ears and they were driven out of that home into a new place by hardliner extremists.

When they moved to their new house, Hussain lived for some time in relative peace but then he went public on his apostasy and on the plight of ex-Muslims in a documentary that aired on Channel 4. This culminated in local extremists once again descending on his house and attacking him numerous times. Hussain began to live in a state of 24/7 fear and was concerned that he or one of his precious family members (including six children) would die. Distressed, he reached out to police numerous times but they successive calls for help once again were ignored and his voice was silenced.

Horrifyingly, one evening Hussain was set upon by local Muslims and beaten with pick axes. The footage of this night caught on CCTV camera viscerally illuminates the ugly ordeal that he encountered: [insert footage]. Hussain was lucky to survive this experience and it was only by the Grace of God he managed to get out alive, with several polish neighbours coming to his rescue.

The persecution became so bad that police issued a warning to Hussain telling him they could no longer protect him and his family – a sure indictment on the state of affairs in the UK when its own police force can no longer protect innocent citizens from the crushing invasive forces of extremist Islam. (یہاں کلک کریں) When will the world wake up and realise that there are some ideologies so extreme in nature that they cannot possibly be compatible with our western way of life? Will the UK’s experience be a cautionary tale to other Western nations and compel them to stop capitulating in the name of political correctness to forces that would destroy the treasured values underscoring them. Is it too late for the UK?

Hussain’s visit to Australia with the BPCA was a resounding success. He gave a compelling talk at the Australian Secular Party’s event “Losing your Religion: Ex-Muslims of Australia Speak Out” on February 9, 2019. Featuring prominent guests including Armin Navarbi, Harris Sultan and Zara Kay. Although dialogue at the event was heavily centred on atheist ex-Muslim experiences, Hussain’s testimony gave insight into the experience of Christian ex-Muslims. We commend the Australian Secular Party for hosting such a meaningful event which surely cultivated great awareness around ex-Muslims plight. The message of the night was that this movement needs to work together on these common issues if there is to be success in thwarting attempts to quell western freedoms under the weight of extremist Islam.

BPCA has been working with many ex-Muslim groups in the UK and wishes to continue doing so and working also with Australian groups to unite together against Kaffirophobia (Kaffir is a derogatory term used to denote non-Muslims and thus kaffirophobia is hatred of non-Muslims) and apostasy hatred. BPCA found it quite helpful to network with many ex-Muslims in Australia and be part of the movement that repudiates any repugnant ideology threatening Australia’s way of life.

BPCA hopes to continue to work with ex-Muslim communities around the world to unite against apostasy hatred and kaffirophobia.

Nissar endured years of persecution, as exemplified by this CCTV footage which captured a brutal hate attack outside his home


Hussain continued to make a remarkable impact on Australia throughout his visit. He conducted an excellent talk at a local pastor’s home in Canberra. The room was brought to tears listening to his tragic ordeal and hopefully many of the attendees will be compelled to get behind reforms to ensure that the Australian way of life is protected and that what happened to Nissar does not become the norm in Australia.

Hussain and the BPCA were also invited to attend Catch the Fire Ministries, a church at the centre of a controversial but landmark case which cost the pastors 1.6 million dollars in legal costs. After the Racial and Religious Tolerance Act 2001 (Vic) was passed, the Islamic Council of Victoria instituted proceedings pursuant to section 18C against the Catch the Fire Ministries church alleging that anti-islam sermons the ministers conducted constituted discrimination. In a watershed moment, Pastor Danny Nalliah and Pastor Daniel Scott were eventually victorious. When the case was eventually dismissed former Prime Minister John Howard (Australia’s second longest serving Prime Minister) met with the pastors to commend them on their victory in protecting free speech in Australia. BPCA and Catch the Fire Ministries remain concerned that despite this victory section 18C of the above-mentioned Act has not been abrogated and that law suits underneath it can still be instituted.

Hussain spoke to the Congregation on Friday 15ویںof February 2019. His compelling and painful testimony brought many attendees to tears. It compelled many people to consider the need for reforms in Australia so that stories like Hussain’s are not repeated in Australia. Hussain beseeched the Australian government to take strong steps to prevent burgeoning apostasy hatred and kaffirophobia and to insulate the Australian way of life. Hussain’s testimony has certainly galvanised support for apostates in Australia and abroad. It has compelled Australians to be introspective and consider the need for change to avidly protect Australia and its freedoms.

The congregation was so moved by Hussain’s plight that it presented him with a generous love donation. BPCA on behalf of Hussain wishes to thank Catch the Fire Ministries for this love donation to Hussain. It was a beautiful gesture to commemorate an amazing event.

“Australia warmly welcomed Nissar and were very open to what he had to say. It was enlightening to hear Nissar speak of his poignant, compelling and challenging story of adhering to his faith despite severe adversity.

“It is clear the Nissar also really enjoyed Australia and wishes for his experience to be a cautionary tale for Australians about the risks associated with flawed immigration policies.

“We need to redress the problems which allow extremism to flourish almost unchecked in the west. It is clear that we must stop capitulating to extremists.”