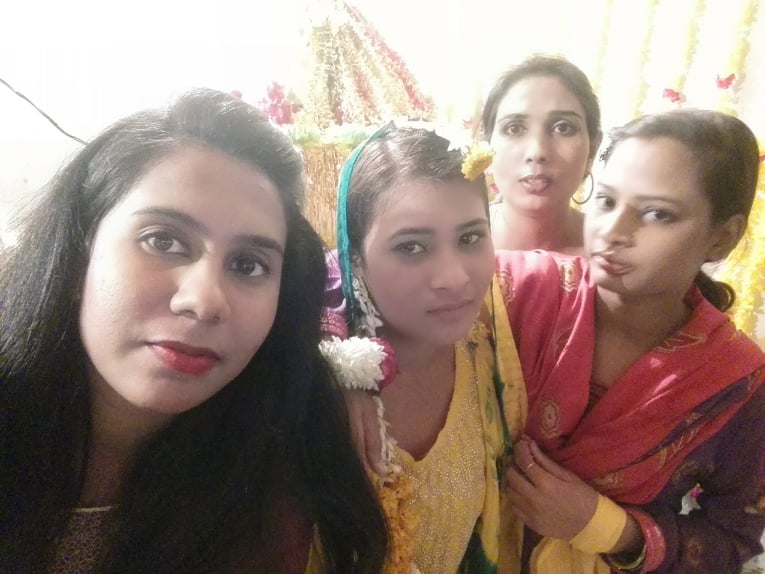 Mehwish, Sehrish (bride in 2016), Farzana and a friend

Farzana who had survived one of the most brutal gang-rape incidents that British Asian Christian Association has ever responded to, has chosen to forgive her rapists and drop her sense of victimhood in favour of marriage after a series of trauma counselling sessions with Mehwish Bhatti, our National Executive in Pakistan.

Farzana’s sister, Sehrish, who was also attacked at the incident, married in 2016 after finding solace in her innocence and the love of God. Her husband was able to forgo the honour culture in Pakistan and has been a ever-present loving presence in her life since then.

At the time of her sister’s wedding however, Farzana vowed never to marry and her trust for men had disappeared after being emotionally wounded by the brutal attack on them both.

Now two and a half years later, her sister has given birth to two beautiful daughters and Farzana says seeing the progress in Sehrish’s life has helped her and restored her confidence in men.  She said: ‘God has moved in my life removing the tarnished impression I had of myself’.

‘He has set me free from the unwarranted guilt and shame I felt.’

Farzan has now agreed to marriage with a man who has been vetted by her family for his Christian virtue.

Farzana, added “I hated all men after the attack on my sister and I – we were innocent but suffered torture and abuse at the hands of sick individuals.

“I did not want to get married, but the biblical teachings shared by Mehwish through which God spoke to me, reminded me of my purity through Christ – i no longer feel dirty”

Sehrish and her husband have two beautiful children and my nieces showed me what the gift of marriage can offer Godly couples.

“I realised it was time for me to shelve my fears and trust in God and so I agreed to the marriage proposal and was grateful that God found me a husband willing to take me despite what happened.”

Mehwish Bhatti, said “God is a healer and loves each of us with such abundant love.

“Though Farzana found it hard to move on from her attack eventually God restored her faith and confidence.

“My beautiful sister will soon be married and as she is one of the pair of victims, I was first sent out to assist, I feel elated beyond measure.

“This marriage offers a new future for Farzana and her fiance and for me it is proof that in His time God resolves all problems for those who cling to Him.”

It has been four years since Sehrish and Farzana were frogmarched to a vacant building at gunpoint and raped as teenagers when they went to use a local field as a makeshift toilet (یہاں کلک کریں), a case that has been featured on the BACA website seeking support for the two surviving victims and for their use of proper and safe toilet facilities (یہاں کلک کریں).

As the two girls walked the short walk from their house to the outdoor cesspit together for safety, they were accosted by five males with a pistol who forced them to a vacant building where for 14 hours, were spat on, kicked, punched and suffered all manner of sexual depravities.

The men even had the gall to tell the two frightened submissive teenage girls that they deserved the treatment for being Christian and eventually after having their fill of excitement left them naked and bruised back in the field they were abducted from.

BACA failed in their legal battle for justice when they took up the case after the material witnesses were bribed and threatened. The sisters family have since been
relocated, and have been supported into a new life far from their ancestral home, which they had to give up.

BPCA would like to provide a gift to sister Sehrish as she begins the next step in her Christian walk. We would like to raise £500 to help with the costs for her wedding.  If you would like to donate or send any gifts please donate or post items to our address as found on this link (یہاں کلک کریں).

Another Christian killed in Police custody