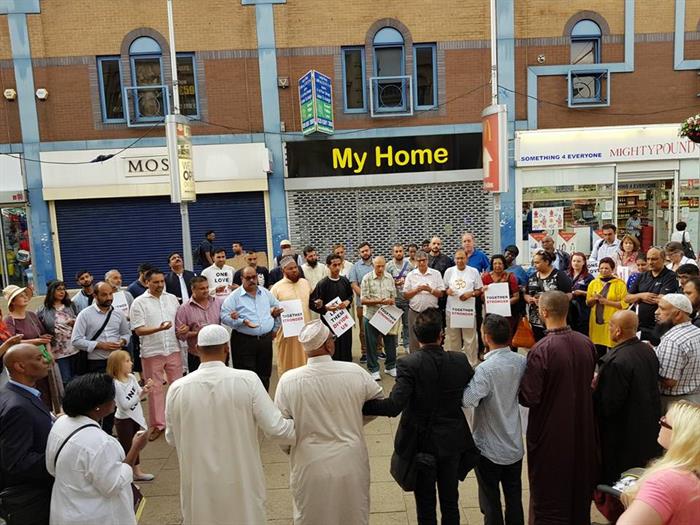 Charlie Hebdo became the centre of a series of recent Islamist attacks in France beginning from the 26th of September, after a young Pakistani man of 18 years stabbed two people, outside the former offices of the French satirical magazine (ਇੱਥੇ ਕਲਿੱਕ ਕਰੋ). The attack occurred during the trial of seven of the accomplices of the gunmen killed for the attack at Charlie Hebdo headquarters in 2015, that resulted in 12 deaths.

The world was stunned to silence (October 16th) when a school teacher from Paris, who shared cartoon images of Muhammed during a classroom session on free speech, was murdered by a Muslim fanatic urged to action by the parent of a child at the school. the teacher had his throat slit by the Islamist who had to be shot dead by police after refusing to drop his weapon (ਇੱਥੇ ਕਲਿੱਕ ਕਰੋ).

Only two weeks later (29th October) three people had their throats slit by a blood-hungry Islamist whilst at church in Nice.  The Islamist attacker frighteningly continued to shout allah-hu-akbar as he was shot but not killed and was then arrested (ਇੱਥੇ ਕਲਿੱਕ ਕਰੋ). The Tunisian attacker was a Muslim asylum seeker who had only entered the country days earlier, causing a debate over need for the stiffening of France’s asylum process.  The outcome of this attack was a the heightened number of threats towards a Tunisian Imam who has supported the banning of Burkhas and who condemned the attack on Charlie Hebdo (ਇੱਥੇ ਕਲਿੱਕ ਕਰੋ).  Even worse four, 10 year-old children have been questioned by French police because of their open support of the murder of their teacher (ਇੱਥੇ ਕਲਿੱਕ ਕਰੋ).

Only a few days later (2nd November) a crazed Gunman shouted allah-hu-akbar as he rampaged through the streets of Vienna and murdered innocent people.  Initially it was thought that there were a number of shooters but later police confirmed that the one lone-attacker involved had travelled to six different locations, killing 4 people and injuring 17 others including a Police officer (ਇੱਥੇ ਕਲਿੱਕ ਕਰੋ).  The event was the first Islamist attack in Austria who had not been targeted in the numerous attacks across europe till then.

After the attack in Vienna, Britain finally raised our own threat level to severe.  Home Secretary Priti Patel said the British people should be”alert but not alarmed”.

“This is a precautionary measure following the horrific events of the last week in France and last night in Austria and is not based on a specific threat.”
She added that significant steps had already been taken to amend powers and strengthen the tools for dealing with developing terrorist threats.
“As I’ve said before, we face a real and serious threat in the UK from terrorism.
“I would ask the public to remain vigilant and to report any suspicious activity to the police.”

British Asian Christian Association, however is concerned that the UK Home Secretary fails to understand just how significant the threat in the UK is. Questions remain on how the UK has ever reduced our threat level to below severe?  It is very evident that terrorist attacks across the globe reduced during the Coronavirus pandemic lockdown, but this was not due to a collaborative spirit between extremists and the rest of the world, but a consequence of the increased visibility of those on the streets when a curfew was in place and a reduced number of people at targeted locations.  thefts, burglaries and other crimes also dropped during this period, which would have given police more time to investigate terrorism – which must be an additional factor.

Reports from France of a moderate Imam having an increased number of threats made towards him and 10 young Muslim children, stating that they would kill their teacher if they blasphemed, suggests multiculturalism has reached a new nadir.  It is suggestive that many of the Muslims in western nations are as extreme as those in Pakistan, Saudi Arabia and Nigeria to name but a few locations where Islamist strongholds exist. It simply cannot be a curse related to France alone. If any British satirical newspaper was as brave and Charlie Hebdo and trialled similar cartoons, we in this country would also face the explosive grand-scale, hate-fuelled, terrorism that our French counterparts have.

Radicalisation sadly is a reality of modern Islam that threatens the very future of all non-Muslims and the less aware we are of this situation, the more likely the future of Britain is one of schism and polarisation.

BACA has written several reports on the hate-crimes that have targeted the growing number of apostates who quit the Islamic faith. Both of these were ignored by the UK Home office, despite being a canary in the mine illustrating a rise in Islamic radicalisation. Read our reports (ਇਥੇ) ਅਤੇ (ਇਥੇ)

We have reported on a number of incidents in which converts have been targeted for hatred:

But these attacks are not just on Ex-Muslims

Non-Muslim girls are being targeted for grooming by Muslims in Pakistan with over 1000 a year forced into Islamic marriage.  Imams are known to preach about a special place in heaven for those who convert women in this way,  It may also be a reason why so many successful grooming gangs in the UK have entrapped non-Muslim women, mainly Sikhs and White women generally those who have some vulnerability, into a life where they are sexually exploited.

There is no need for us to list the number of terrorist attacks in the UK suffice to say that in 2017,  5 terrorists attacks were the second highest ever recorded in the UK (ਇੱਥੇ ਕਲਿੱਕ ਕਰੋ). Of course one of these attacks was a far right terrorist attack and this extremism needs to be wiped out too.

More has to be done to protect Britain from radicalisation, but it must be done soon. We have entered a second lockdown in the UK, though it is not as strict as the first lockdown, it may give us a small reprieve.  It will definitely reduce the desire to complete any planned terrorists attacks due to the lessened impact and heightened visibility of perpetrators.  Measure BACA believe we should enact as a country are listed below:

“Britain will continue to have increased polarisation amongst its communities unless we find a solution to Islamic radicalisation and racial hatred – each of these two social dilemmas fuels the other.

“Terrorist attacks are being used as a tool to breed racial prejudice in addition to faith-hatred and the result is one not worth contemplating.

“Reducing Britain’s terrorist threat level from severe currently, would be a misguided act and would leave our communities vulnerable.

“There are people of good conscience amongst all faiths – we must all do more to build bridges amongst one another to make a more cohesive Britain.”

BACA continues to challenge against extremism and fundamentalism across the globe.  You can donate towards our work (ਇਥੇ)