Pak-Christians attacked over water needs given own clean water source! 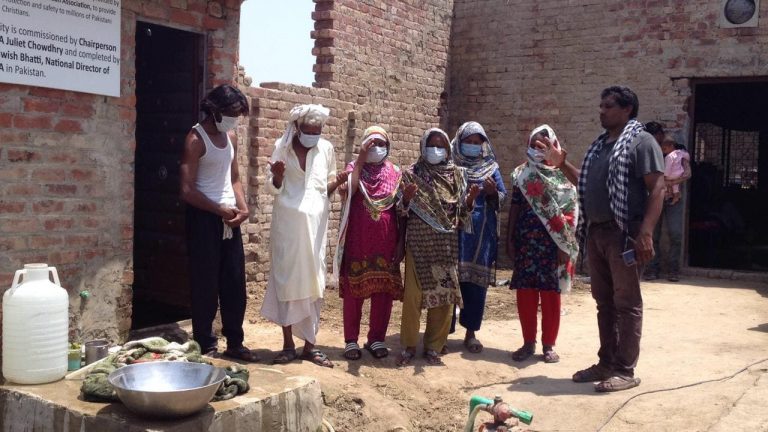 Christians in Pakistan, mainly in the poor rural areas and mainly girls, are regularly being attacked while trying to access the basic need of water.

BACA began the installation of two clean water and toilet facilities with generated pumps for the Christian communities of Rao Khan wala, a village in Kasur, serving 7 Christian families and 35 individuals, in January.  But work had to stop during the lockdown.  Since the lockdown has been eased BACA have now completed the water projects.

Shazia a 38-year-old widow and her 42-year-old neighbour John had a piece of land on which BACA built a toilet and a deep-water pump facility which they have offered to share with neighbouring Christian families.

As part of the agreement to provide these facilities, BACA will regular undergo 3 monthly checks to monitor the community to ensure that toilets are kept clean and remain accessible by all agreed users.

Pastor William from Rao Khan Wala shared with BACA representative Mehwish Bhatti, how grateful they are for this installation initiative adding it would solve a lot of their problems by providing clean water for drinking, cooking and other domestic purposes. He said that they were happy to share clean water facility with any needy Muslim family in the area to show Christ’s love and believe this will promote harmony between the two communities.

The family of Pakistan’s youngest blasphemy victim, Nabeel Masih, who has been in prison for the last three years awaiting trial, have been living at a secret location with no toilet or water facility, asked BACA to create a toilet of their own rather than share with nearby Muslim houses which given the nature of Nabeel’s case, would raise security concerns. Nabeel Masih’s father, Amanat Masih, is suffering from Asthma and struggles to nowadays fetch water.

Nabeel’s eldest brother Wakeel Masih, expressed his thanks to BACA for their tireless efforts of helping with Nabeel’s release by providing them solicitor and monthly financial support and is grateful for the toilet and water facilities too.

BACA first learnt about attacks on Christian communities without clean water sources, when two teenage Christian girls were brutally raped by several Muslim men while attempting to use an open field as a toilet (click here)

Sherish and Farzana were abducted at gunpoint whilst using an outside toilet in an adjacent field when one was not available in their house.

It is estimated that every year, 700 girls in Pakistan are raped or abducted and forced into Islamic Marriage, detailed in a report by Muslim NGO Movement of Solidarity and Peace, in 2014 (click here).  Many of them are abducted while answering the call of nature in a nearby cesspit or in a nearby field.

BACA have observed many instances where Muslim communities treat Christians as dirty creatures and not allowing them to drink from clean water facilities. In the infamous case of Asia Bibi, she received a 9-year prison sentence for drinking a glass of water from a pot which was owned by the Muslim women (click here) and recently Saleem Masih who was washing himself from a Tube-well owned by the Muslim man was killed for contaminating the water through his ritual impurity (click here).

In rural areas it is typical for people to drink from unhygienic irrigation fields, streams and puddles by slurping water through a handkerchief in an effort to purify the water and make it a bit safer.

The lack of a clean water source is a contributory factor to a low life expectancy and the spread of diseases such as TB, Dengue Fever and malaria is prevalent.

BACA’s projects have been a great success in providing relief to large Christian communities of up to 1000 people with toilets and washroom facilities but the number of sick people with water borne diseases from poor sanitation system increases daily. Unable to afford medication, many local people die young.

By constructing these bathroom and drinking facilities, the BACA can meet the needs of larger communities and smaller local households which typically could consist of 4 or 5 families or the provision of a hygienic water supply in a public facility in the heart of a rural community.

Many young girls suffer from different UTI (Urinary Tract Infections) because they are too afraid to travel to nearby outside dirty water irrigation systems and stream to clean themselves during their monthly cycle.

BACA have been holding medical camps to raise awareness on the importance of basic hygiene habits and have received many requests for the construction of toilets and clean water pumps. Each project they complete will revolutionise the lives of these impoverished people and greatly improve their health and quality of life and can be only completed by the Grace of God and with generous sponsorship.

“In areas where we have installed clean water projects previously the evidence of improved health is palpable.

“We will continue this work as we tackle the low life expectancy that challenges rural Pakistanis.

“Moreover, when telling people to wash more frequently to avoid COVID-19 infection we must make sure that we are not directing them to other fatal illnesses.”

We cannot install these clean water facilities and pumps without your help.  Each one costs a varying amount dependent on the depth of the water table, the type of ground we are digging into and many other factors. An average price for a clean water pump facility is around £500 and building toilets will cost an additional £100.  If you feel moved to donate to this work please (click here)

The first ever European Parliament event on Christian discrimination in Europe