By Editor28 December 2015No Comments 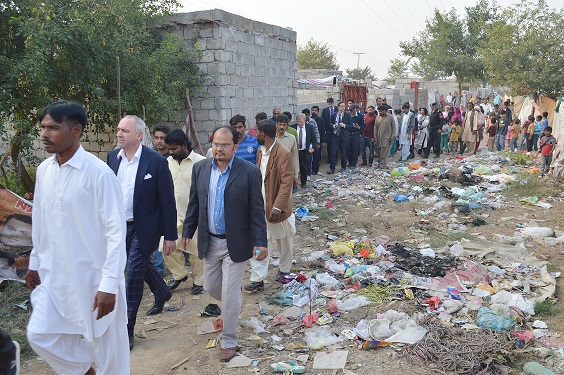 A Christian slum community in Islamabad are in danger of being evicted from their homes, which will be demolished without any compensation, if the Capital Development Authority (CDA) are successful

The CDA have submitted a typo-ridden document to the Supreme Court of Pakistan which Dawn Newspaper, compares to a Trump-like diatribe (click here).

Islamabad’s CDA have submitted a five-page report to the Supreme Court of Pakistan describing Christians as unskilled, unproductive “land grabbers”, who have erected “ugly villages on the scenic landscape of Islmabad “One of the most beautiful [cities] of the world.”

The report to Supreme Court laments the Christian community’s alleged takeover of the government’s territory, identifying the influx as a threat to the numerical superiority of Muslims in the capital city.

In the same report the CDA now recognise that Christians are the majority of residents of ‘Katch Abadis’ (squatter settlements, whereas previously they were trying to eradicate slum based on the false premise that terrorists, murderers, thieves and paedophiles were using the settlements to hide from law enforcement agencies.

“It is necessary to identify the fact that most of the katchi abadis are under the occupation of the Christian community who are shifted from Narowal, Sheikupura, Shakargarh, Sialkot, Kasur, Sahiwal and Faisalabad and occupied the Government land so boldly as if it has been allotted to them and it seems this pace of occupation of land may affect Muslim majority of the capital.”]

The CDA have failed to recognise that many Christians have lived in slums for decades, some even since the British-approved partition of the Indian subcontinent on religious lines in 1947. Many of theses Christians were converts were Hindus from the lowest castes and worked as servants for Sikh gentry. They depended on the Sikh lord for their food and shelter.

Member of Provincial Assembly for Punjab, S.P. Singha, himself a Christian, raised concerns about 60,000 families, which equated to over 200,000 people made homeless, after  Sikh land was handed to Muslim migrants during partition. in 1948, he explained that  Christians were evicted from now Muslim lands and were given no support by the government, lamenting over their helplessness.  He said:

“The crux of their plight is humiliation and hunger.

“There are only two ways to deal with the issue of the Christians.

“Either we dig trenches and bury them alive or we send them to refugee camps, as they  have no food and shelter.”

At the time the Minister for Refugee Settlement and the Revenue Minister approved three to four acres of agricultural land for each Christian family, but soon after these documents went missing (click here).  Anti-Christian bias has always been evident in Pakistan despite the very egalitarian views of Muhammed Ali Jinnah the founder of the nation.

In January 1948, Singha also condemned the practice of beating and killing Christians to force them into roles as sweepers and cleaners, roles which untouchable Hindus were no longer undertaking as they fled to India for safety.

The number of homeless Christians had further increased by April 1952. C.E. Gibbon, another member of the Punjab Assembly, stated:

“I beg to ask for leave to make a motion… to discuss a definite matter of urgent public importance.

“Namely, the grave situation arising out of the policy of the government in respect of the wholesale eviction of Christian tenants from their home holdings.

“Thus rendering nearly 300,000 homeless Christians who are on the verge of starvation.

“The consequences of which are too horrible to imagine.”

The Christian population in Pakistan’s most populous Punjab province at the time was about 450,000 and the number of homeless Christians had further increased to two-thirds by April 1952.

Though the then, Governor of Pakistan, Sir Robert Francis Mudie enquired into what was being done for these Christian villagers, ultimately they were overlooked.

These Christians were internally displaced, they moved to cities to work as sweepers and sewage workers. Employment that was readily available to them as the Hindus from lower castes that had been working these roles had fled to newly independent India.   Hundreds of illegal settlements from France Colony in Islamabad to Joseph Colony in Lahore formed as these Christians migrated to where they could find work.

Christians created homes for themselves on the edge of cities, in abandoned areas, where they faced no pressure from the government -land at the time was under the control of local panchayats (community leaders). There are even several villages where Christians live on “shamlat-deh”, government-owned land dedicated for communal purposes.

In 1960, when Pakistan created a new capital, many more Christians settled in Islamabad, eager to take up work as road sweepers and sewage cleaners as that is what was expected and the only role available to them.

In recent years attacks on cities such as Gojra, Shanti Nagar and St Joseph’s colony have led to new Christian migrant communities settling in Islamabad and other cities. This due to a perceived safety within cities as opposed to rural Pakistan, where madrassa education has propagated Islamist hostility (click here). Unbeknownst to them the same Islamist ideology existed in cities too.

In the meanwhile, Pakistan’s population is continuing to rise at a ferocious pace and this has had the effect of increasing land prices. With paucity of land in the cities and unaffordable prices land mafia are doing all they can to extort land from vulnerable Christian minorities.  It is believed that a corrupt CDA is seeking to sell on land where these shanty towns exist to unscrupulous developers while ridding themselves of the taint of untouchable Christians from the capital city of ‘the land of the pure’ (definition of name Pakistan).

Pakistan’s Supreme Court in 2013, found that land-grabbing was the prime motive for the burning of the Joseph Colony (click here), another “katchi abadi” occupied by Christians since the 1970s.

Despite Pakistani Authorities being very aware that land mafia groups are targeting Christian communities for persecution, in order to usurp their land for profit – no protection is being provided.

The CDA itself has been condemned publicly, as voices from Christian activists and Muslim spokespersons from the opposition Pakistan Peoples Party decry the exhibited  ‘fear of Christians’ (click here).

Pakistan has ratified the 1948 Universal Declaration of Human Rights which means it has obligations to not only provide housing but also defined standards of living.  Article 25 of this UN Convention states:

The  2001 National Housing Policy declares that there shall not be any eviction from a katchi abadi unless the residents are relocated as per resettlement plans (para 5.2.1).

“‘Informal settlements comprising more than 40 houses’, which can be registered and regularised based on when they were built. The preferred official policy is to improve the abadis where they are, but if any abadi is to be removed for extraordinary reasons, that can only be done after working out a detailed resettlement plan in consultation with the residents.’”

“The demolition of katchi abadis would deprive residents of their fundamental right to life and access to housing under Article 9 of the Pakistan Constitution.

“This demolition blatantly ignores their right to due process, guaranteed under Article 10-A of the Constitution.

“The inviolability of mans dignity and privacy of home has been broken, this is in breach of Article 14 of the Pakistan Constitution.

“Questions rise about the freedom of movement and right to settle in Pakistan as per Article 15 of Pakistan’s constitution.

“Protection of Property rights are enshrined in Article 24 – these have been ignored.

“Its clear that only Christians have been targeted in this pernicious action so Article 25 which protects equality of rights has been contravened.

“With so many laws broken, one wonders what action the Federal Government will take against a CDA that is clearly not fit for purpose.”

“Its clear from the report from the CDA that anti-Christian bias is at lay within their action.

“Whether the desire is to rid Islamabad from ritually impure Christians or based on more materialistic principles, ultimately their actions are corrupt.

“Such actions are utterly condemnable and we urge people to contact Parliamentarians in their nations to engage in dialogue with the Pakistani Government to see that these people are protected.”