By Editor10 November 2016No Comments 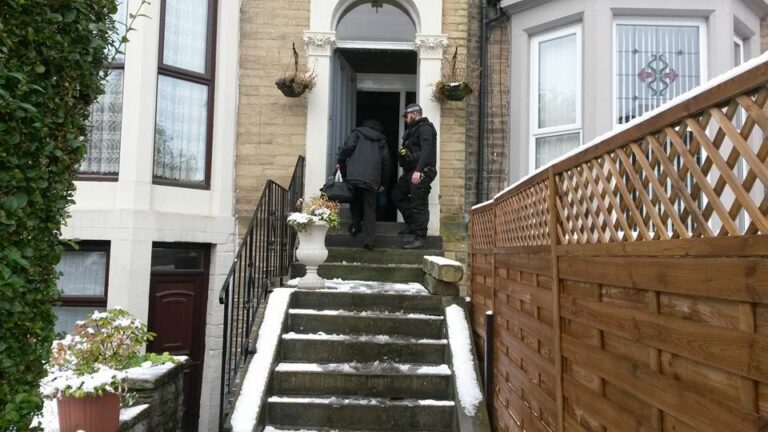 Yesterday, news cameras caught the end result of an 8 year old campaign of religious hatred against a Christian convert and his family, Nissar Hussain with multiple car loads of armed police escorting him and his family to pack up the last belongings from their home and leave Bradford for good, such is the level of hatred and credible death threats against the family. The case has raised serious concerns about the level of hatred against converts
from Islam in this country, reflecting an age old and worldwide phenomenon. The Hussain family have been put through immense emotional, psychological and financial strain due to the effects of the ongoing campaign of murderous hatred against them, and until fairly recently also faced an uphill struggle in convincing people in authority just how bad their situation was, hampered, many are convinced, by the well documented fear of being labelled ‘Islamaphobic’, a fear that has featured in several recent cases such as the Rotheram sex abuse cases.


The entire Hussain family have been moved to a safe house, provided by the British Pakistani Christian Association (BPCA) in partnership with other charities. Wilson Chowdhry, BPCA chairman, said ‘When I helped set up the BPCA, the focus was on the situation of Christians in Pakistan, and those who had to flee as refugees to other countries. I don’t think I ever imagined that I would be doing what we are now, dealing with Christians effectively made internal refugees here in the UK.’

Watch attack on Nissar Hussain by masked men above.

The BPCA safe house programme is in addition to at least one other already existing UK scheme of safe house protection for Muslims fleeing forced marriages and for converts from Islam. Mr Chowdhry commented ‘We have seen some estimates that about a third of all so called ‘honour-killings’ in this country involve those deemed to be apostates – those who have abandoned Islam, most often for the Christian faith, and also fairly often for atheism

One of the reasons Hussain has faced such hostility is that he spoke out. However, among some Christian circles, it has been well known for a long time that many other converts live in hiding, fearful for their lives, cut off from old family and friends, some even feeling the need to move every few months at times to try and avoid being tracked down.

Mr Chowdhry said ‘We have come across this in Pakistan too, where Christians, not just converts, have to give up jobs and communities and flee and live underground, and we have it happening in the UK too, even though on a lesser scale. With the help of various groups and charities, we are setting up rescue snatch squads for people facing religious hatred because of their conversion from Islam, particularly for our Christian brothers and sisters, as we anticipate things getting worse, not better, certainly in the near to medium future. In large part, we are in this situation because of a refusal by significant segments of society, media and authorities to take this phenomena seriously, due to political correctness and fear. We hope that is coming to an end; if so, it is not a moment too soon.’

He added ‘We often hear words of condemnation from some Islamic leaders, and words that change is needed within the Islamic community on this issue. We have heard such words before. Whilst we recognize that genuinely moderate Muslims face a big battle, some groups position themselves as moderate when they are anything but. Words are fine, but they are cheap. Until real, substantial and sustained change is evident, the question of whether some groups and individuals are issue false words and positions under the doctrine of taqiyya is very much relevant, and it is something to which the authorities and society needs to be more alert.

‘In a police meeting meant for mediation between Nissar and local Muslims a local Bradford councillor referring to an incident in which he accused Nissar of verbally abusing a local Muslim man’s mother, stated that such a crime would  result in most Pakistani’s  undertaking an ‘honour killing.  He refused to provide the video evidence he suggested was available to him without any reason -Nissar Hussain believes the allegation is baseless and false and simply meant to thwart justice.  When I explained that as a Christian such an incident would not result in the thought of murder the local councillor seemed surprised. Sadly extremist ideology is rife amongst large swathes of British Muslims even those in positions of authority a fact that will create further polarization if left unchecked. The hardline stance taken by the councillor and representatives of Naz Shah a local MP at the meeting meant that little was achieved from any of the negotiations.’

The BPCA is also initiating research into the level of persecution converts from Islam face, and hopes to link to groups of secular ‘apostates’ to try and gain the fullest picture of the situation. Our report will be submitted to Scotland Yard, the Association of Chief Police Officers the Home Office and other statutory authorities.  We hope that it will change the way crimes of persecution for apostates are investigated and will result in better care and counselling to victims.

British Pakistani Christian Association has now partnered with another Christian charity and have initiated a safe house for apostates to Christianity. The safe house will provide shelter, counselling and spiritual development to residents. The safe house will be free of charge and without time limit, however a primary aim will be to equip tenants to re-establish their lives and independence in a place of safety away from those seeking to harm them. Apostates wishing to apply to stay at the premises will be vetted and those interested to stay at the home can make an initial enquiry by emailingadmin@britishpakistanichristians.orgor by calling 020 8514 0861. Should you wish to donate towards the ongoing costs of our safe house please (click here)

We challenge people to sign our ongoing petition calling for a change to policing protocol, government policy and amendment to the Race and Religious Hatred Act 2006. We are seeking better awareness of apostasy hatred and the need for such crime to be documented:

Earlier in theyear Wilson Chowdhry organised a meeting between Under Secretary of State for the Home Office Karen Bradley and Nissar Hussain.  Sadly although policing practice improved the violence towards his family increased.

Nissar
has been a brave campaigner for justice but his efforts to raise awareness of the abuses faced by apostates in the UK, has taken its toll on his family. They are now looking forward to the opportunity to convalesce in relative safety. However the family still want the perpetrators of the injustice to be prosecuted. This is not due to any anger but a desire to remove the culture of impunity within which persecutors of apostates thrive.

“I hope Bradford police continue to investigate the violence and abuse my family suffered and that one day the perpetrators are brought to justice. Nothing the Police have said or done in our situation has given my family and I any confidence that they understand the true predicament faced by converts from Islam. This lack of understanding will continue to scar many further families until acceptance of the pariah status for converts from Islam is recognised by statutory authorities.

“The Islamic Hadith calls for the killing of apostates“Whoever changed his Islamic religion, then kill him.” This statement by Muhammed means converts like myself are the targets of violence by Muslims across the globe, I hope this message gets across to authorities in the UK.”

“The last seven years have been torturous but despite the pain my family and I have remained close and have never deterred from our desire for justice. I thank God that he has given us the fortitude to retain our sanity despite the odds being stacked against us.”

Nissar has been sharing his testimony across churches and conferences across the country. He can be contacted to speak at an event near you through the British Pakistani Christian Association.