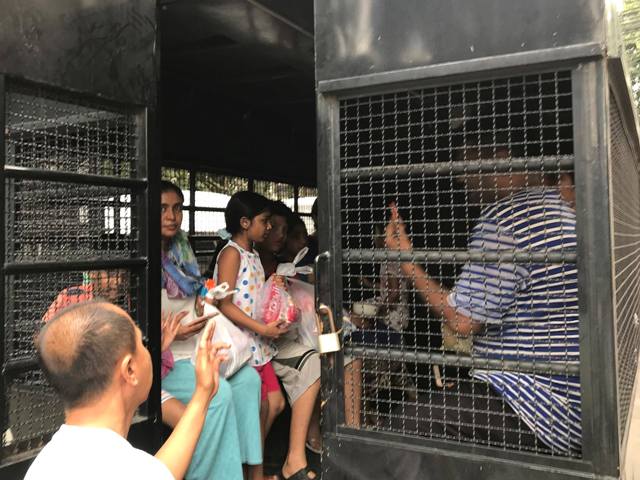 Children locked up in cages after a Thai immigration raid in 2017.

The British Asian Christian Association (BACA) have a proud tradition of helping persecuted Christians in Pakistan and what we are now seeing are more and more families relocating to Thailand for a safer life only to find themselves no better off.
John Jahanzaib, our representative in Bangkok, tells about three such families he went to visit.
Family 1
A suspect in the murder of two Muslim men following the 2015 Yohannabad twin suicide bomb attack, is under arrest from the Thai immigration department after fleeing there for refuge from his accusers.
Adnan Masih (36yrs) flew to Thailand for a life of religious freedom and security from Pakistan along with his wife Humaira (33yrs) and two children Yeshhuwa (10yrs) and five-year-old Eric but was arrested a year ago by the Thai authorities.
Whilst in detention, John Jahanzaib met up with Adnan’s wife who told him they had no choice but to leave Pakistan after the twin attack, when her husband was named as a collaborator with a lynch mob.
Following the two explosions at Christian churches celebrating Easter that year, which killed 14 worshipers and injuring 75, two other bombers managed to initially escape but were allegedly caught later by Mr. Masih and the mob and were set alight, though this is now believed to be a mistaken identity.
https://britishpakistanichristians.worldsecuresystems.com/BlogRetrieve.aspx?PostID=758612&A=SearchResult&SearchID=1499181&ObjectID=758612&ObjectType=55
Fearing reprisals and arrest, the family escaped to Thailand on a tourist visa despite being offered immunity from prosecution if he accepts conversion to Islam, but have not felt safe in Thailand for the last 4 years and now live in the same state of fear as when they were in Pakistan.
The family are prevented to earn money and the children stopped from attending school and are being supported by BPCA financially by paying their rent in an already overcrowded accommodation and through prayer.

Humaira and her Children
Family 2
Sapna Charles (38) and husband John (40) have also found themselves in a Thai Immigration Centre for the last 10 months having fled to Thailand 5 years ago.
John Charles is suffering from a thyroid disorder and back pain which will deteriorate without medication.
In 2014 Mr. Charles received death threats after participating in a protest against the persecution of Christians being accused of Blasphemy and to the end of Blasphemy laws.
When the Pakistan Police failed to take action, he flew his family to Thailand for safety but have never felt completely secure since arriving, fearing an arrest from the Thai immigration authorities.
Sapna Charles and her three children Ashir (10 yrs) Abiya(7 yrs) and Ethan (4 yrs) who are not able to attend school said her children miss their father greatly and prays for his health and for his safe return.
British Pakistani Christian Association representative John Jahanzaib prayed with the family when went to visit them to encourage Sapna Charles to stay strong in this hard time. He also gave 3000 Thai baht to support the family with living costs.

Family 3
Parveen Barkat (60) now finds herself alone when her husband, Barkat Masih (60) was arrested during an immigration raid by the Thailand Immigration authorities.
She is vulnerable having had no children to take care of her and complains she is unable to see her husband without a visa.
Mr. Barkat who has been in detention with Thai immigration for a year, is a diabetic and even though is getting medication, there is no word being past to his wife about his health.
Mr and Mrs Barkat were happy in Pakistan till a Muslim neighbour insisted they sell their house to him and started threatening them if they didn’t.
When the couple refused, he tried to intimidate them with threatening behaviour and accusing them of committing blasphemy.
Being elderly, the couple felt they had not the strength to fight their case which may have left them losing their house anyway, reluctantly, they decided to sell and move to Thailand.
John Jahanzaib prayed with Parveen and promised to see and encourage her every other week while she awaits her husband’s return, giving her 3000 Thai baht to aid her with living costs.

The situation in Thailand is getting worse daily and in some areas the condition for Pakistani Christian Asylum seekers continues to be challenging. BPCA will carry on providing food to the IDC detainees over the next few weeks and aims to feed as many as possible showing love and care to all held.
Given the obvious sensitivity of these cases, all families are reluctant to share their stories in greater detail but none of the names have been changed.

Next month we restart our distribution of food for detainees at the Immigration Detention Centre in Bangkok. We need your help to continue to help these and many other survivors of persecution in Bangkok.

We must understand Jesus’ deity, his descending from God, because He and the Father are one