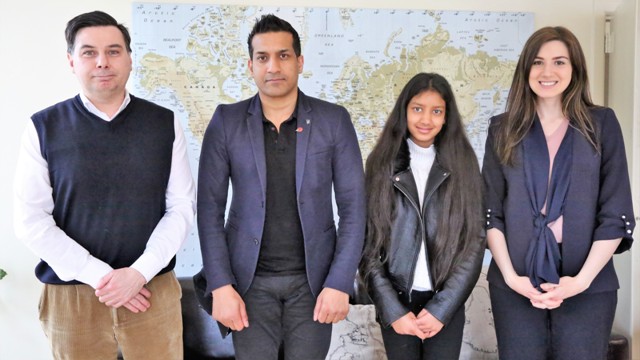 BPCA Chairman Wilson Chowdhry was invited to the office of South Asian Democratic Forum based in central Brussels (click here), to help them with a policy brief they are writing about the persecution of Christian minorities in Pakistan.

During the meeting Mr Chowdhry shared updates on the current situation in Pakistan that included reports of a rise in membership to IS by large swathes of Pakistani citizens that has seen a prolific increase in terrorist attacks in recent years.

Mr Chowdhry explained to several officers including Susan Guarda, Professor Siegfried Wolf and Stephan Lampe that although discrimination and persecution has always manifested against Christians from the very outset of the creation of the nation, it is the terrorism that has increased international awareness of the situation.

He expanded by telling the officers that Christians have always been marginalised and live in the poorest of conditions, suffering bullying and harassment in the workplace and centres of education and are being subjected to daily attempts to force them to convert to Islam.

Nothing has changed with respect to any of the above he said, barring that the animosity and hatred towards them has intensified since adoption of a national curriculum has inculcated the impression that Christians are demons and spies for the west, through caricaturing.

Mr Chowdhry has shared evidence of several concerns such as the kidnapping of young Christian girls followed by their rape and forced Islamic marriage which has brought Christian moral to its lowest ebb. A Muslim NGO ‘Movement of Solidarity and Peace have estimated that 700 Christians enter forced marriage in this way a figure Christian NGO’s argue is too conservative (click here).

Over 1 million Christian slaves work under indentured labour contracts for a pittance unable to escape the burgeoning interest applied to a small loan of say £50 that is usually required to pay for medical treatment.  Families are lost into generational slavery after their lead patriarch signed a contract with a thumbprint as he would have been too illiterate to even write his own name.  This should come as no surprise however as it is believed only 4% of Christians attain an adequate level of literacy.

9 terrorists attacks targeting Christians in the last 6 years has created great fear and animosity in an already beleaguered community. Threats from IS are rife and churches up and down the country continue to join a growing list of recipients, told they must close churches and convert to Islam or die. BPCA has warned the Government that the biggest threat to their future is no longer the Taliban but IS who capture the hearts of entire Muslim communities. Large masses of Muslim citizens are being promised a new age of Islamic rule that will bring people closer to Allah and eradicate Christians and other Kafir from their midst beginning a new dawn of holiness.

A copy of our latest publication on Pakistan “Education, Human Rights Violations in Pakistan and the Scandal involving UNHCR and Christian asylum seekers in Thailand” has been provided to the SADF team to help them build their policy brief. An electronic copy of our publication can be bought (here)

Mr Chowdhry was accompanied by his daughter Hannah Chowdhry who is a long term volunteer for the BPCA.  She spoke of her desire to see improved conditions of safety for the young Christian girls who are left bereft of an education in Pakistan and run the risk of being abducted and forced into unwanted marriages. She said:

“Police authorities must take seriously their responsibility to protect all citizens under their jurisdiction and to ensure this more effective bodies should be created to ensure policing remains free of prejudice and professional.

“Children should be able to reach their best potential so that they can contribute to the development of Pakistan.

“We are blessed in the west and countries like Britain and the US who donate to Pakistan should ensure money is being used for the improvement of all citizens and that money used to prop up Pakistan’s failing education system creates schools that mirror those we in more developed countries enjoy ourselves.”

“The last time I met with representatives of SADF was around three years ago.  At the time I was delivering copies of our second report on Pakistan that they had funded a gesture of confidence in a small committed group of Pakistani Christians that helped establish our charity.

“We owe a lot to Paulo Casaca the founder of SADF for the opportunities he created that led to us being invited to the Dutch Parliament to speak at two extraordinary meetings, resulting in a parliamentary meeting in which they ratified high risk status for Pakistani Christians.

“Visiting SADF today was an honour and a privilege and I believe with the kudos and the diplomatic know how the group have, great change will come of the policy brief they are developing – they have a habit of making things happen that seem beyond the rest of us.  I am grateful they considered me worthy enough of contributing to their forthcoming endeavour.”

Pak-Christians should not use humanitarian protests for party politics