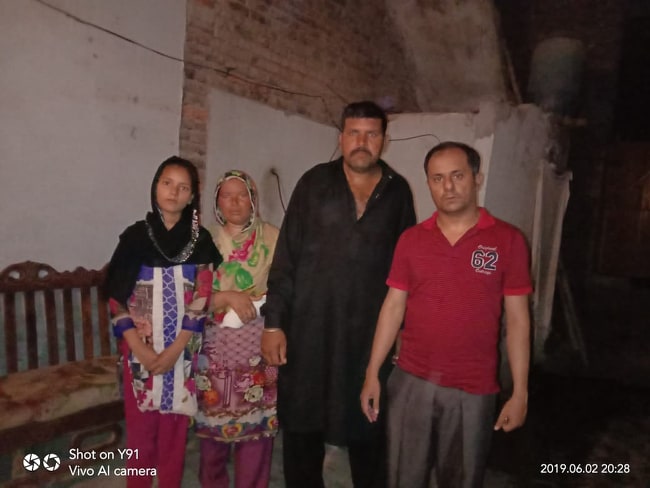 A Muslim man has been detained for questioning by police during an investigation into the disappearance of an 8th grade Christian schoolgirl, Sania Masih (15 yrs).

Razaabad police arrested Mohammad Nasir on the first day Sania went missing, Sunday 19th May 2019, but stopped the investigation a day before Eid-ul-fitr.

Sania with her brother Suleman.

Sania was last seen when she was at home with her sister and grandparents, Sadeeq Maish (65 yrs) and Sureya Masih (60 yrs), taking out the garbage to a street corner around 2.30pm that afternoon. Mr and Mrs Masih attending the Valima (Wedding party) of a relative after attending church and Sania’s brothers were out with their respective friends.

Sureya Masih went searching for her granddaughter, concerned for her safety as she had taken an unexpectedly long time placing garbage outside their home.  She raised the alarm after Sania was gone for an unusual length of time (around 20 minutes) by calling her parents home to help her find the missing child.

Sania’s father and mother returned home quickly within 30 mins of the call, hurriedly excusing themselves before the meal was served at the party. They rushed around hectically seeking any information on their missing daughter. While they continued the search, neighbours Babar Ali and Ashraf Paul, told him that they witnessed Sania being dragged by two men, Mohammad Naveed Habib (28 yrs) and Pervaiz (30 yrs),  who forced her to sit between them on a motorcycle and rode off.

Worse still there has been no sign of either men or their families since the abduction of Sania in fact both of their homes nearby have been locked up and secured, which has provided a major cause for concern over the safety of Sania.

In the meanwhile Pakistani police, Muhammad Naveed Habib’s brother in law Mohammad Nasir was brought in for questioning on the same day, but was released 9 days later after a rigorous interrogation. A First Investigation Report (FIR) has been registered against the two men Mohammed Naveed Habib and Pervaiz, under charges for abduction to compel to marriage under Pakistan Penal Code 365B:

It should be noted that 365B was inserted into the Pakistan Penal Code as part of the amendments in the Protection of Women (Criminal Laws Amendment) Act, 2006. When the bill was passing through Parliament PM Imran Khan and his cronies in Pakistan Tehreek Insaaf (PTI) were opposed to it and the current government have been very lacklustre in their approach to enforcement. This is believed to be one of the reasons why the kidnap of young Christian girls is on the rise in Pakistan.

Speaking to BPCA’s Mehwish Bhatti father of Sania, Latif Masih, Said: “The police have since been reluctant to investigate the case further, telling us [the family of Sania] to look for the missing men ourselves.”

This is a very usual response from local police when dealing directly with impoverished Christian families and victims.

“I have spoken with Investigation Officer Hamayo Raza who has since my conversation informed me that an investigation is underway and that a nationwide search for the felons has been instructed.

“It is important that police act swiftly to save this child before a false marriage certificate can be produced as once in place this will make it more difficult to extricate Sania from her abductors.

“When I learnt about this story I was horrified.

“As a 15 year old teenager myself I can understand how frightened young Sania is, it breaks my heart that she has been made captive by her abductors.

“I don’t want to imagine the torture or pain Sania will be subjected to, I just pray for her freedom.

“This world can be a horrid place but I can imagine few places I would less like to visit then Pakistan where I would be a target for these predators.

“I know that BPCA has been constant with their appeals to police athorities and the Government of Pakistan to protect vulnerable children.

“The fact that these crimes are increasing suggests that our words are falling on deaf ears – we must all do what we can to change this awful situation yong Christian girls and women face simply for following their faith and being of female gender.”

Neither, Mr Naveed Habib, a Mason, nor Mr Pervaiz, a fruit seller, were known to the Latif Masih family and since hearing news of her daughter’s kidnap Mrs Latif suffered a stroke and is now paralysed down her left side.

The family were feeling helpless however, BPCA is providing care and assistance to the family and have covered a months wages for the father and son who have not been able to work while they try and trace the whereabouts for Sania.  BPCA would like to offer the family a further 6 months of wages while they struggle through this difficult period with court and police dates and the obvious depression this incident is inducing upon them.  To cover the two wages of the father and son we require £200 per month. We would also like to hire a solicitor for the family which will cost £1000.  If you would like to donate to this appeal please use on of several payment options listed (here)