By Editor17 January 2023No Comments 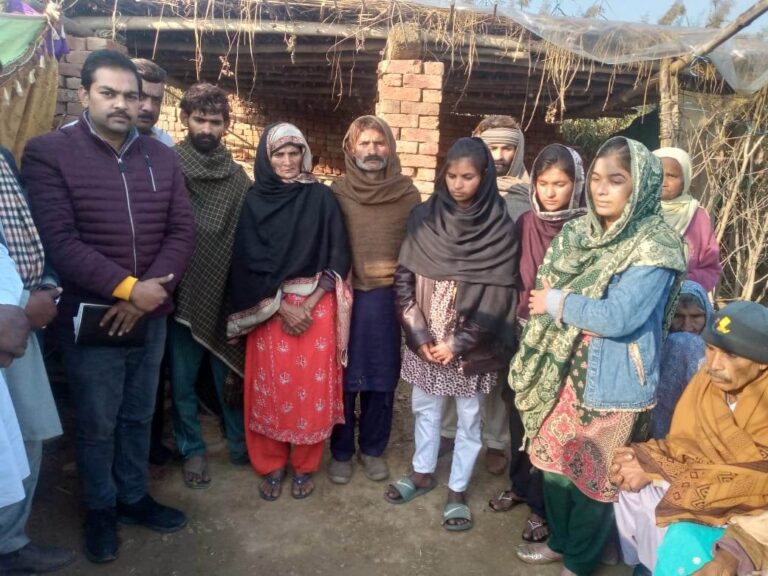 The patriarch was shot dead before his family, after he asked the trespassers on his orchard to stop stealing fruit.

After shooting the farmer the men threatened the frightened Christian family with death if they told the police, then laughed as they ran away.

As the made their getaway the men shouted out ‘you  Christian chura [filthy sweepers] have no chance of justice, we can kill you any time we want’.

Okara Police have arrested one of the culprits and have an All Points Bulletin (APB) out for the other two known fugitives.

Early in the morning, on 11th January 2023, Allah Ditta (55 yrs) began tending to his small guava farm in Okara Pakistan, which he has leased from Muslim owners for a year.

Around 2pm three Muslim men entered the farm and began destroying guava fruit on the farm.  The culprits Usama, Intizar and Muhammad Awais began plucking, tasting and throwing away unwanted fruit while they digested the best produce.  They also began trampling on fruit they did not like, laughing and joking as they left their destruction in the well kept guava orchard.  The three men were known to the Christian family because they had undertaken such theft and vandalism before, they were from wealthy Muslim families and looked down on Christians and often treated them harshly.

Allah Ditta along with his son Shahbaz Masih (30 yrs) at the time were undertaking some routine care of their trees. Allah Ditta walked across to the loud, loutish men and asked them not to waste away his fruits, explaining they were owned by him, and that the fruit was not ripe anyway as it was winter season.

“Your a Choora (filthy Chrristian)!

“How dare you prohibit us from taking fruit from this farm!”

“Grab  him and kill him”

Usama then pulled out a pistol from the small of his back and shot Allah Ditta in the chest. The culprits then shouted out to Shahbaz that if he told the police about what happened that he and his family would be killed.  The men then ran away laughing and destroying more fruit as they exited the crime scene.

Shahbaz who was tending to the trees some distance away ran towards his father after watching  Usama pull out a gun and hearing the bang of the gun shot. When he arrived by his father’s side, there was a large amount of blood on the floor, and all over Allah Ditta’s clothes.  Allah Ditta was not moving and he feared the worse.

Shahbaz told us that he began to weep inconsolably, he called out to his father but was getting no response.  He called emergency services using the 911 service and requested emergency medical support.  he then called the Police emergency hotline on 15 and requested help describing the shooting incident.

The medical rescue team arrived in minutes but on investigation they gave the worst diagnosis for Shahbaz, explaining that his father was dead.  Police arrived 20 minutes later and investigated the crime scene.  After police had completed their investigation, Allah Ditta’s body was put into an ambulance and taken to Civil Hospital Okara for a postmortem.

Brother of Shahzad, Kashif Masih was asked to go to Renal Khurd Police Station.  After taking all the necessary details of the crime, police registerd FIR No.28/23 against all three culprits under charges 34 and  302 of the Pakistan Penal Code (PPC).

The next day, the Mr Ditta’s corpse was buried in a local Christian graveyard. BACA visited the family on 13th January and attended the memorial service.

“The police arrested Muhammad Intizar after raiding his home.

“He confessed to the crime  and police are now  searching for Osama and Muhammad Awais.

“We have been informed that an All Points Bulletin (APB) has been sent to national police forces.”

All three culprits belong to wealthy families and have strong political connections. The father of Osama is a retired army officer and he has already approached the family of Allah Ditta, offering apologies for his son’s behaviour.  He offered  Soobedar Masih, 500,000 Rs (1757 Pounds) as compensatory bribe for the loss of the family’s patriarch.  The family of Allah Ditta have unanimously and outrightly refused his bribe.  However, the powerful position of the father of Usama places them all in great danger and the family have asked for some protection.

“He was the main bread-winner for his family, a great father and wonderful neighbour.

“The murderers have killed him without reason and we are standing with the family of Allah Ditta.

“We are hoping they get justice.”

Allah Ditta has five children, three sons and two daughters. None of the children have married yet. Brothers Shahbaz (30 yrs), Kashif (26 yrs) worked with their father in their family guava orchard. The boys picked and washed guavas from their trees and sold them on hand-pull carts, hawking them in different high street areas. The two daughters Misbah (24 yrs) and Sawera (22 yrs) help their mother Josephine (54 yrs) with household work.

The family survived on the money earned by selling the guavas by the two brothers. Josephine Bibi, the widow of Allha Ditta, said:

“We are all broken by the loss of Allah Ditta.

“I have not stopped crying, my husband was fit and healthy, we are a loving family because of his good direction.

“This is a cruel fate for him to suffer, he never saw any of his children get married – it’s heartbreaking.

“We have not bean able to earn for the last few weeks as we cope with his loss.

“We are good Christian people.

“Our neighbour’s Christian or Muslim have always got on with us, we have fair dealings with all them.

“These young men are the vilest of creatures, they bore immense evil in their hearts.

“It shocks me that one of them is the son of a retired army officer, these are men who are meant to protect civilians, no matter what their religion is.”

The family of Allah Ditta, have asked for help with legal costs and

The poor family has requested BACA to help them for justice for their father.  British Asian Christian Association, has already given the family £100 to cover the cost of the funeral of Allah Ditta and would like to provide a solicitor for which we need to raise £1000.  We may also have to consider a safe house for the family (or part of the family) but for now that family do not want to leave their orchard, which is the source of their income and was their resourceful fathers passion. If you would like to help fund the cost of a solicitor please (click here).

“I am shocked by the audacity of such an attack in the middle of the day, with witnesses.

“Worse still, the nature of the hate speech towards this family reminds us of the deep-set pariah status of Christians in Pakistan, who are considered anathema.

“We will do our utmost to see that this family get justice, but the wheels of justice are slow in Pakistan and desire to implement justice for Christians limited – even amongst the legal and judicial fraternity.

“In the meanwhile we are local pastors will provide counselling and support.

“This family will need to be protected from threats and from other coercion, but police and other law authorities will provide minimal assistance.

“In most cases they are known to accept illegal bribes from the perpetrators to fudge the process.

“God is our strongest weapon and we ask for your prayers for this family.”