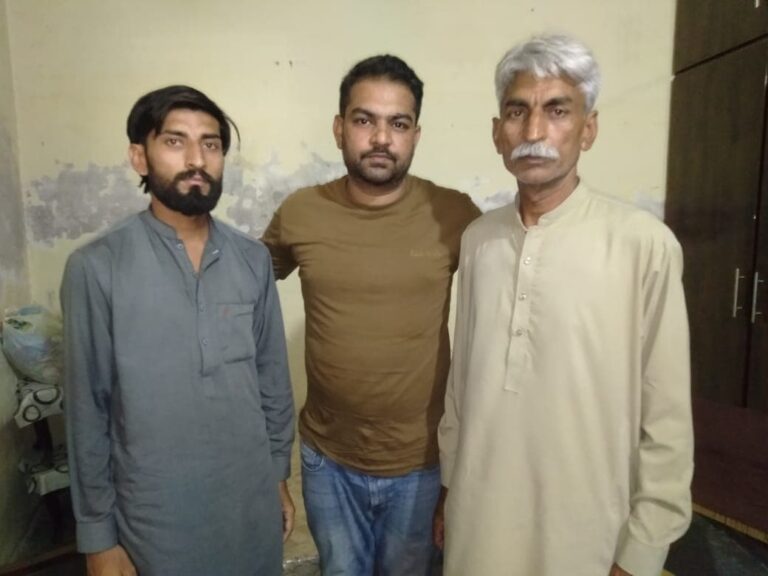 A Christian man was shot dead in a public street by a Muslim gang in Sheikhupura, on Wednesday 27th April 2022.

The father of the deceased has confirmed this was a gang related killing based on a debt owed by his son to one of the Muslim men.

The mafia style execution occurred on a public road, while the slain man’s  father and a brother were held back by other gunmen and watched from a distance.

On Wednesday (27.04.22) Sajid Masih (32 yrs) was brutally murdered by Muhammad Asad Rajpoot and two cohorts before a number of witnesses.

At the time of the incident, Sajid was working in a family owned pet food store located at Basti Balochan Wali Christian Colony Sheikhupura.

Father Munir Masih (63 yrs) alleges that around 11:30 am Mr Rajpoot entered the store and began shouting expletives towards Sajid using derogatory terms such as chura (filthy Christian) and began hitting him while demanding money for a loan. He has also alleged that Mr Rajpoot is infamous for his operations dealing in drugs and loan sharking in the local area.

Sajid apparently pleaded with Mr Rajpoot to give him more time, but the they had had a previous quarrel and this created a disregard towards his remonstrations. Mr Rajpoot remained unrelenting with his demands.

Egged on by his cohorts, Mr Rajpoot then collared Sajid and proceeded to take him out of the store at gunpoint and onto the busy streets about 100 yards away,

At this point father Munir Masih (65 yrs) and brother Salmoon Masih (25 yrs) tried to follow, attempting to defuse the situation. As soon as they exited the shop two men within the vehicle that drove Mr Rajpoot to the store, pointed guns at them.   The father and son were warned not to take another step forward.

From a distance the father and brother watched as Mr Rajpoot unceremoniously spat at, verbally abused, beat and then shot Sajid multiple times.

Alarmed by the shots and filled with anguish over the fallen body of Sajid, Munir and Salmoon sped towards Sajid who was on the ground struggling for breath and bleeding to death.

At the same time, the gunmen ran in the opposite direction, back towards their car. They shouted words of hate at the beleaguered father and son, while passing them.

In the busy shopping arcade, many people saw the shooting and helped Munir and Salmoon carry Sajid into a rickshaw, to be taken to a local hospital. See video below – Warning the contents of the video is very graphic as it was just taken after the shooting of Sajid Masih:

Munir Masih spoke to BACA and described to us what happened next. He said:

“When I got to Sajid, he was in extreme pain.

“Every breath was painful and he could not speak.

“We put him into a rickshaw to take him to hospital, but on the way he succumbed to the injuries and took his last breath while in my arms.

“Once we got to the hospital, he was pronounced dead.”

On arrival at District Hospital Sheikhupura, Sajid was pronounced dead. He leaves behind his wife Muskan Masih (25 yrs).

Munir Masih described how they were filled with grief, cried incessantly and called as many relatives as they could bear to call, including his six siblings, and informed them about Sajid’s murder.

On the same day, Munir and Salmoon travelled to Sheikhupura City A Division police station and registered a First Information Report (FIR No. 500/22) for the killing of Sajid.

The FIR was registered against Mr Rajpoot and his accomplices on the charges of  murder and joint enterprise, crimes were referenced under sections 34 and 302 of the Pakistan Penal Code.

Police have conducted raids on several properties linked to Mr Rajpoot, but so far have been unsuccessful. An all persons bulletin has been sent across police stations nationally, as Mr Rajpoot and his cohorts have been placed on a most wanted list.

“The culprits are very influential.”

“They have close connections with leading political figures and some police are in their pay.”

“I am afraid that they will come back and kill other members of my family and I, but I will still seek justice for my beloved son.”

BACA’s field team have visited the family and helped them make a plea to Pakistan’s Chief justice for protection. We have offered support and have paid the cost of the funeral for Sajid Masih.

“This attack on a Christian man is possible because of the Pariah status that Christians have in Pakistan.

“A daylight shooting of a man in any other country would result in state v felon arrest and judicial process.

“In Pakistan murder cases are not state cases but action must be undertaken by Claimant families, who have to register a crime with local police and follow through with the cost of a solicitor.

“Most Christians cannot afford this but in recent years BACA and other charities have stepped in to see justice done.

“It is impunity that has resulted in the frequency of crime in Pakistan and international voices must be raised against the morally deficient Qisas and Diyat Laws.

“These Sharia laws have created a get out of jail free card for murder and rape through payment of a bribe and continue to make a mockery of Pakistan’s justice system.”  Read more on Qisas and Diyat Laws (click here)

Munir Masih has asked us to cover the cost of legal action against the perpetrators of the killing. Our operations manager will be speaking directly with the family and witnesses to ensure they are willing to advance through a protracted and difficult legal case. We expect that the family will want to proceed as they indicated on first discussion a desire for justice.

We would like to support them through the financial support needed to bring this case to court.  To do this we will need to raise £1500 to sanction an approved advocate and at some point may have to move the family to a safe house. If you have been moved by the plight of this family and would like to donate please click (here).