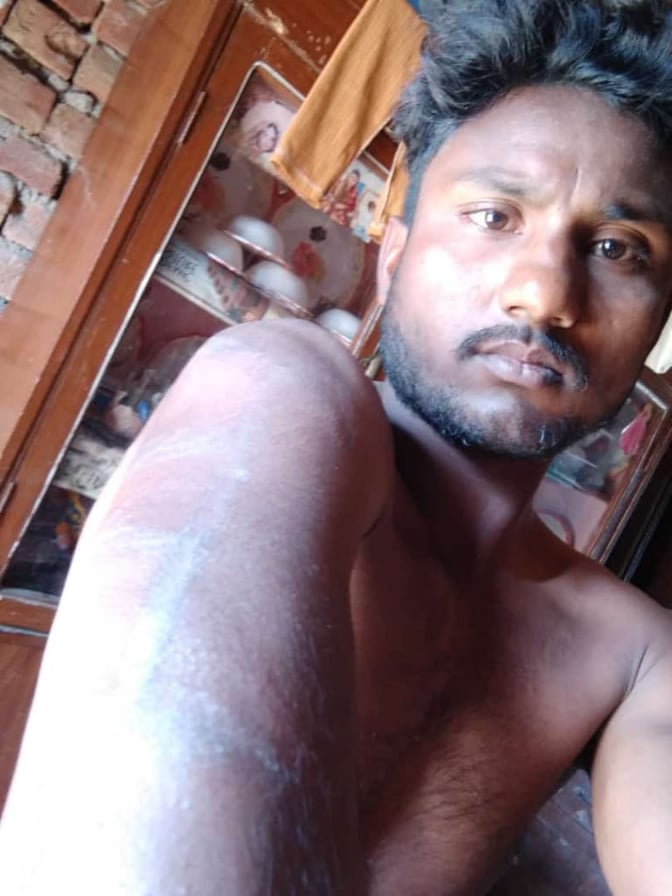 A young Christian servant was beaten to near death after he refused to continue work for a wealthy Muslim who was paying below what was agreed between them and forcing him to clean toilets which was not part of the original job description.

Shaan Masih (21) a resident of Chak number 15/125L district Mian Chanu worked for Chowdhry Kashif Nadeem in a role that had previously been undertaken by his father and grandparents, who had all been servants to the same family.

When Shaan’s father died he was working elsewhere as a farmhand and refused to work for the local landlord as he knew he being paid regularly and had a greater salary in his role at the time. However, the Landlord who was very powerful locally and made it very difficult for Shaan to ignore calls for work as a servant, by saying that his was obligated to work as his father and grandfather had worked at Kashif’s home before him. Kashif said that his family would not tolerate any other people working there and agreed to negotiate terms and as his family’s eldest son it was his responsibility to take on the role.

Shaan eventually accepted the employment role after agreeing a monthly salary of 9 thousand rupees (£50) for 84 hours work, per week.  He was required to dust rooms, maintain the garden and run small errands.  Shaan had also stipulated in the agreement that he would not be required to clean toilets and had garnered the help of Kashif to use his influence to resolve an ownership issue for land belonging to his deceased father. However after starting the work he soon realised getting his salary was not going to be easy In fact 9 months after starting work Shaan had still had not been paid any wages.  Delays to payments were blamed on the need for Shaan to speak directly with Kashif who was never available.

Shaan continued to work for Kashif Despite never having been paid on time.  He was forced to take small loans from other family members while he waited for his payment, which eventually amounted to £111 meaning he was feeling the press of a dire financial situation.  He was always threatened that leaving the job would have severe consequences and felt trapped, but could see no way out.  He also had the glimmer of hope that the ownership dispute for the land his father owned would be resolved by Kashif.  With no other option before him Shaan carried on with the work, much like his father and grandfather before him.

Kashif was working from 7am to 7pm every day and suffered a lot of bullying at work, was pushed and beaten for work done that was not to the family’s liking.  He was constantly called a Chura (dirty Christian cleaner) and soon cleaning toilets became a regular part of his work despite his protestations. Only Kashif was required to clean the toilets and none of the Muslim servants, they were also treated with more respect.

On13th March, 2020 Shan wanted to visit his church for a Friday service as he wanted join the communal prayers during his period of fasting for Lent.

When he asked Kashif’s wife, Safiya, for  permission to leave work early and join the evening mass, he was shocked by her immediate upset.  She said:

“You Chura are always going to those dirty churches and bringing your germs into our home.

“Before you go, clean our toilets and take our germs to your church so that they can suffer instead.”

The slight was more than Shaan could bear and he refused to clean the toilets, saying: “Being before God is a sacred thing and I want to be comfortable with God and would not feel good, if I clean your toilets before I go.”

The wife refused him permission and threatened to fire him unless he cleaned the toilets.

So Shaan told her in no uncertain terms that he was quitting because cleaning toilets had never been a part of his original job description anyway.  With that he left her home and went straight to church to pray.

Later that same evening, Shaan received a surprise call from Kashif  while returning home from church.  Kashif quite pleasantly asked him to visit their home to collect all his outstanding wages. Shaan was really pleased about this as he had waited so long for the payment and was beginning to feel pressure from a large number of growing debts.

Shaan changed his direction and headed towards the home of his former employers and arrived by 7pm. Kashif  and other servants  were waiting for Shaan with a hot iron rod and leather belt.  Shaan was resoundly beaten, spat at and tortured for at least 20 minutes by the family members of Kashif and his servants – most of whom were instructed to do so under duress.   While he was beaten Kashif berated Shaan for leaving his place of work without express permission from from him, he said:

“You are a Chura and should not leave a Muslim masters premises until told to.

“Your nerve to stand up to Muslims is a blasphemy and I will kill you for this!”

Kashif ran inside his home to grab a gun and shoot Shaan who was by now terrified and in fear for his life.  Fortunately, the paternal aunt of Kashif realising things had gone to far, stopped her torture of Shaan, helped him to his feet with the other servants and told him to run away or be killed.

Shan took his opportunity and sped towards his home bleeding along the route. When his mum opened the door he collapsed on the floor and his Mother Maqboola bibi (54 years) began screaming in a panic. Neighbours rushed to the house to check to see what the clamour was about and immediately began to care for Shaan. While he was being treated  Shaan fell unconscious for several hours from the pain of his injuries.

The next day (14th March) Shaan travelled to Mia Channu local Police station assisted by his cousin Abid Masih (27 years), but when there they  where they were denied any real service which is believed to be due to the local influence of Kashif’s family. The police instead insisted that Shan obey Kashif’s orders for his own safety.

Shaan and his cousin then decided to go to Cantt police station as it is a bigger station and they knew they could get better justice there. While there  they were asked to bring a medical report of Shaan’s injuries, to enable the for the lodging of a crime report (FIR).

However Civil Hospital in Mia Channu told them that due to the passing of 24 hours that it was too late for an effective medical report for the police.  So the the two cousins had to return to police to get a letter of request from the police and then returned to the Hospital who began the medical analysis.  An application for an First Information Report was made at the second trip to the police station.

Despite the application for an FIR police have not taken any action against Kashif’s family, despite the beating he took and failure to pay his wages.
Moreover, Kashif has now usurped the land of Shaan’s father fraudulently by taking signatures from Shaan under the guise of the promised help in resolving the land ownership matter.

“The attitude of both the police and medical staff was really disappointing.

“Despite severe burns on my body and immense pain, they treated me like an animal.

“They made me travel between them so many times and no medical treatment was given to me at the hospital.

“The police station did not even offer me a glass of water and are still delaying action by failing to register an FIR.”

Maqboola Masih, shared her concerns for her family, she said:

“My son has suffered a lot due to the unjust actions of Kashif.

“He used my son like a donkey, never paid him and then enacted such violence for no reason.

“I fear he can kill my son anytime he wants because of his influence and power.”

British Asian Christian Association would like to help with the cost of a solicitor for the family which will cost £1500.  We would also like to relocate the family to a safe place where they cannot be threatened or attacked by Kashif again.  We would also like to raise funds to provide necessary healthcare to Shaan so he can recovery effectively.  If you would like to donate towards this family please (click here)

BPCA Church for Pakistani Christians growing in number and strength – French reporter moved by their plight!