By admin4 July 2018No Comments 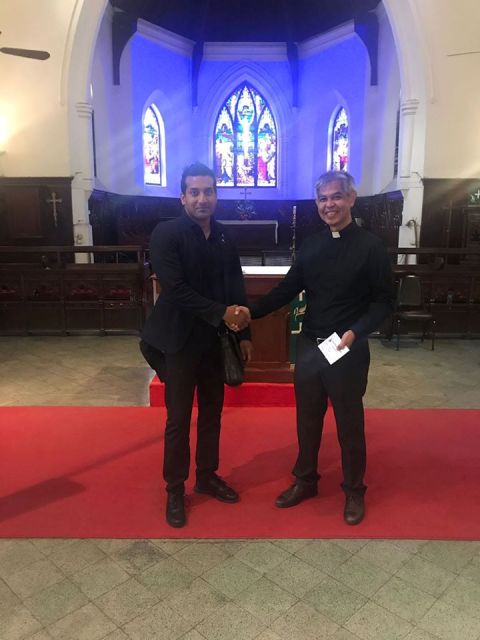 Wilson Chowdhry hands over payment for Thai classes for one of the church projects supported by the BPCA.

The leader of a church in Thailand that organises Thai-language and English classes for asylum seekers funded by the BPCA has spoken out against the targeting of international churches during a resurgent Thai authorities crackdown on people they see as tourist visa over-stayers.

Asylum seekers in Bangkok, Thailand are being re-persecuted by the authorities who simply do not want outsiders in their midst even of they have a genuine application for asylum lodged with the United Nations High Commissioner for Refugees (UNHCR).

Police and immigration officers have collaborated on several sting operations to jail and then detain both UNHCR registered asylum seekers and refugees repeatedly as they try to ‘cleanse their country of undesirables’.

Sadly for many Pakistani Christians the debilitating process and lifelong sentence within the brutal and unforgiving IDC’s has led to them returning to Pakistan. There is evidence of one man being beaten up severely as a consequence of repatriation to Pakistan and one man being arrested on arrival, jailed and later convicted of blasphemy or which he is now serving time in a brutal Pakistani jail.

The church correspondent who asked not be named shared his fears about the recent raids, he said:

Dear Wilson,
Here is a small item [we asked for an update on our joint education programme]. I have deliberately not mentioned [our] Church by name. You are probably aware of the police ‘scare’ that we have a few weeks ago. It seems that several international churches were targeted one Sunday. As a consequence, we have been careful to remove all asylum seeker photos from our website and Facebook etc., and seek to keep a low profile.
All good wishes to you,
[name withheld]

“Thai authorities seem adamant they will remove every last Pakistani Christian asylum seekers form their midst and are becoming more aggressive as the years pass on. This targeting of churches and the raid a few days ago that took place on a public transport bus are clear indicators of their no-tolerance position.

“Despite clear evidence of persecution in Pakistan the western world and Thailand continue to ignore the plight of Christians who escape the country. This has left many Pakistani Christian asylum seekers stranded or re-persecuted across the globe.

“This latest targeting of churches who are offering help to a needy and desperate group is a new low for Thai authorities who frightening care agencies and charities who are saving lives, comforting and providing much needed resources to already broken people.

“If international churches in Thailand are forced to give up their support and help which does not cost anything to the public purse, I fear the suffering of already beleaguered Pak-Christians is set to reach it’s lowest ebb.”

“What do asylum seekers need as they prepare for their future? Of course the chance to live in peace in their own, without fear. They have hopes and dreams for their children.

It is hard for Christian communities to know how best to assist. In Bangkok, many asylum seekers have arrived, in fear for their lives, only to find that their progress beyond Thailand is a very slow process. Churches are learning to help where they can.

“Thai classes – to assist with the process of living in the community, and improving their daily lives help, as do English classes – looking forward to a future when English language may be a help with relocation to a third country. And even the occasional day out – a chance to enjoy the sunshine and countryside. It’s great that we can encourage one another!

The asylum seekers themselves report that the raids are happening everywhere across the country and are requesting prayer. Many who may already have refugee status are still in danger of arrest and desperately need sponsors or proposers as they are called in some countries, to engage with immigration officials in their respective countries’ immigration system to help these displaced Pakistani Christians.