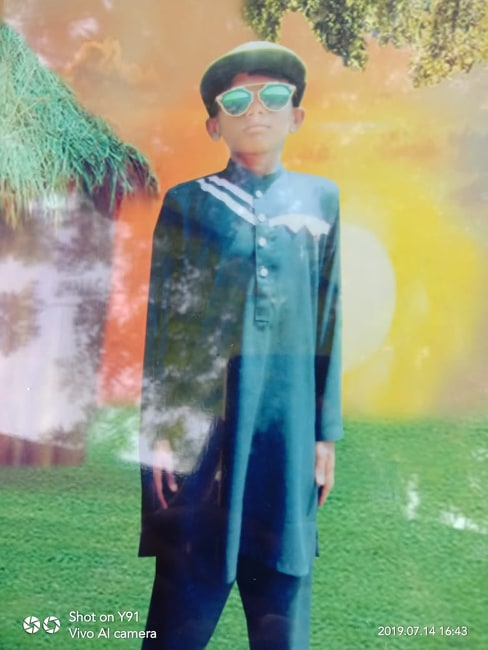 For around two years we have battled for justice for Badil Masih a Christian boy of only 11 years old who at a very tender age become the responsible man of the house, after his father became a serious drug addict. Badil Masih decided to give up his summer holidays so he could work in a scrapyard to help his mother meet the financial demands of running a home.

Badil was a hard worker and always completed his tasks working insufferable long hours to meet his employers demands and deadlines. When he asked for part of his salary that was overdue his brutal Muslim employers became more difficult with him. This was despite the fact that his younger brother Moon of only 9 years would often help him without pay.

On the day of his death Muhammed Ikram His employer arrived at the scrapyard at 5pm and started bellowing at Badil saying work had not been completed. Badil told him he would not be returning to work the next day because of the mean nature of Mr Akram and the low pay and Mr Akram attempted to strike him. However, Badil ran before he could be struck but was later caught by Mr Akram and his friend on a motorcycle, brought back to a private room at the workplace and raped then beaten to death for having the audacity to speak back as a Christian. While this happened frightened 9 year old Moon carried on working until he could hear the screaming of his brother in the locked room. When the two men came out as if nothing had happened and refused to tell him where his brother was he ran home. Read more (here)

This case has been fraught with difficulty as the culprits were given bail very early on after payment of a hefty bail fine on 13th December 2019 – read more (click here). Once out threats to Sharifah Bibi and the witnesses increased tenfold and one by one witnesses refused to cooperate due to fear or receipt of bribes – read more
(click here). The case also suffered huge delays due to political manoeuvres, prejudice and discrimination – read more (here).

Last month the solicitor appointed by BACA confirmed that the likelihood for success in this case had diminished due to the loss of key witnesses. The solicitor was asked to explain the situation to Sharifah Bibi in a private meeting, but Sharifah did not meet with him. Instead on the advice of her brother she met with the solicitor of the opposing party and agreed to a compensation payment of 3 lakh rupee and a 1.5 Marla plot of land. This was reduced from an earlier offer that was 5 lakh rupees and a 2.5 Marla plot of land.

It should be noted that Sharifa Bibi has regularly been threatened by Mr Ikram’s cohorts and told to accept the bribe or suffer the death of her remaining son. Moreover, the loss of witnesses Ishfaq Masih and Irfan Masih who refused to speak the truth before the court due to
the threats received from the murderers family has left her feeling inconsolable and dejected. The witnesses and her family were increasingly pressurizing Sharifah to accept a compensation payment.

It beggars belief that two men could be involved in such a brutal attack that leads to the death of an 11 year old and escape a murder conviction. Sadly this is how the justice system still operates in Pakistan.

“In the court the witnesses refused to accept that they had seen the murderers beat the head of Badil with a metal rod.

“Police forensics failed to implicate the murderers – I was left with no option.”

“The culprits have been trying to dissuade Sharifa Bibi from the outset.

They first began offering her a sum of 5 Lakhs and some land of 2 ½ Marla as compensation if she agreed to drop the case.

“When they couldn’t lure her into compensation for the murder of her innocent son they started threatening the eye witnesses and they succeeded.

“The result of which was a diminishing of the position of the case.

“After the eye witnesses had perverted their statements before court, the vicious murderers and their family began to torture Sharifa Bibi mentally with the lie that she has lost the case.

“They again asked her to come to the compromise but now with the lesser amount of 3 lakhs and a plot of land measuring 1½ Marla.”

The father of the murderers would regularly taunt Sharifah in court, saying:

“ We have already won the case, there is nothing you can do

The family of Muhammed Ikram had approached the relatives of Sharifa Bibi who asked her to accept the offer of compromise for their safety.

To date no compensation has been received by Sharifah, she said:

“Since I made my statement in court no-one is answering my telephone calls.

“It’s been more than a week but they have not showed up with the papers for the land or any payment.

“I have forgiven them the murder of my son for the safety and future of my other son but they seem to have betrayed the agreement.

“I know feel sick and depressed.”

BACA’s Operations Manager will be investigating to see what help we can provide. Our solicitor is being contacted to see if the compensation agreed between Sharifah and the Ikram family can be retrieved without any further court process.

UK Christians given workshop on persecution in Pakistan