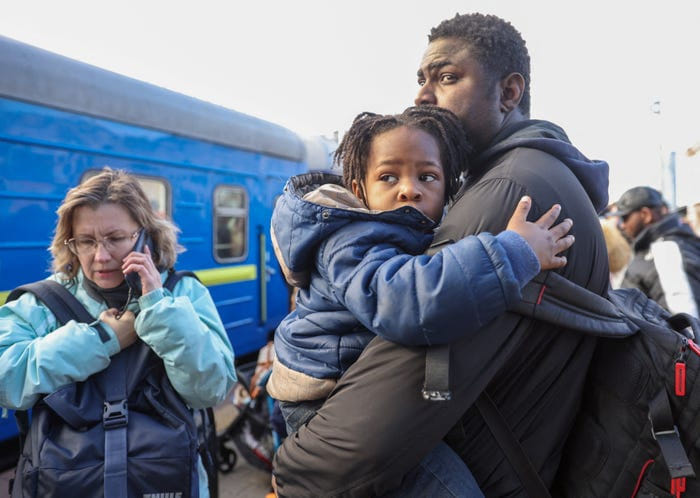 We reported on the prayers being said across churches around the globe after President Putin of Russia began a war in Ukraine, in an earlier post.  In the same post we also shared the sacrifice being made by an Irish missionary couple, who chose to remain in Ukraine despite the threat to their safety.  Read more (here).

That said, we later also shared a very disturbing account of how black and Asian students and citizens of Ukraine were receiving prejudicial treatment, during their attempts to flee the war. Evidence of the ‘different treatment’ was highlighted globally when United Nations’ high commissioner for refugees, Filippo Grandi, spoke out about it.   Read more and watch videos (here).

Having spoken directly with foreign students we have discovered that at many border locations, white Ukrainians were being asked to join a priority queue, Asians a second priority queue and blacks a third priority queue.  Though we condemn this process, it has not in anyway reduced our desire to support Ukrainians who suffer many violent atrocities in an unprovoked war.  We however pray for peace in Ukraine and an end to racism across the globe.

We had explained that many of the black and Asian people who have fled Ukraine have expressed their desire to return one day.  One woman expressed on BBC how much the country has done for her.  An illustration that many have less traumatic memories of their time in Ukraine. In fact many stories highlight how black and Asian citizens of Ukraine are choosing to fight for their country, even as they send their wives and children’s to former homelands for safety.  It is also believed some naturalised Pakistani origin Ukrainians are choosing to fight for their new country also. Read more (here).

The Ukrainian Foreign Minister Dmytro Kuleba, has since acknowledged the racism that manifested towards black and Asian students (click here).

Sadly his acknowledgement following the UNHCR’s proclamation of different treatment, was too late for 4th year Medical student Naveen S Gyanagoudar, who studied at the Kharkiv National Medical University.  He was killed in shelling on 1st March 2021, minutes after calling for family members to transfer his money so he could buy some food. Read more (here).

On  a positive note after the intervention of Indian authorities in helping Pakistani, Nepalese and Bangladeshi students exit from Ukraine, all three nations thanked the Government of India.  We hope that is the start of more cordial relations between these nations. Read more (here).

Even though nearly the whole world has condemned the oppressive military action by Russia,  Pakistani Prime Minister Imran Khan chose to continue with a pre-arranged meeting with President Putin.  When he exited his plane on landing in Moscow, Mr Khan made light of the war by saying he arrived during exciting times.  Read more in our previous article (here). One article suggests that Mr Khan was embarrassed by a snub at the airport when he was met by Deputy Foreign Minister Igor Mologruv, had the meeting cut short by a day and faced a vote of no confidence by opposition parties in Pakistan (click here).  The Standard however, suggests that a large trade agreement was made with Russia over the import of gas (click here).

Two Bangladeshi men who sent out a false video claiming they were being used as human shields (click here), were also set free after intervention by the Bangladeshi Embassy.  The men were facing trial but it has not been clarified what court procedure was being undertaken but we hope it was simply an overstay trial (click here).

Furthermore from all accounts available to us most if not all of the students who were seeking escape from the war, have now been helped by their respective Embassies and have exited Ukraine.  Read more (here) and (here).

We continue to pray for the situation in Ukraine and for the many people suffering.  We condemn racism and prejudice of any kind in any country and continue to highlight concerns when they tangibly manifest. Our BACA team is dedicated to sharing accounts of such incidents. We believe wider awareness of these issues will help bring about societal reform and change.  If you have appreciated our work and would like to contribute please donate by clicking (here).

Miracle Woman Evicted by Her Hindu Son After Conversion to Christianity