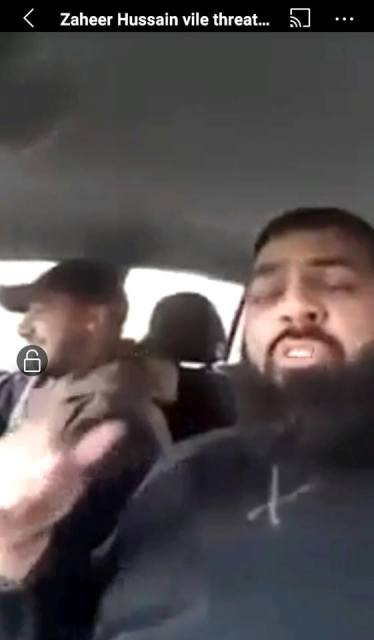 BACA have called for further investigation into the hate-filled rant by Zaheer Hussain after an invite-only meeting held at Preston Police Station with Chief Inspector Sansbury.

As a result of the discussion with Police, BACA were able to provide them with information regarding the two converts who appeared to have been targeted by Zaheer Hussain after a video of a baptism was posted on Facebook. One of the two converts had to undergo a series of forced temporary relocations as a consequence of the malice-filled video. Details of the two main targets of the vile rant were shared with Preston police

Two points raised at the meeting have left BACA worried that despite the extremely ardent efforts of Preston police, our existing legal frameworks may not be sufficient to deal with these types of incidents

During an invite-only meeting to quell an unprecedented level of interest in the prosecution of hate-speaker Zaheer Hussain, CI Sansbury informed BACA representatives that every effort had been made to conduct a thorough investigation, gather all available evidence and consider all possible offences that may have been committed.

The impact of the rant caused offence to thousands of people across the UK and forced several reloactions of the family of one of the targeted converts and has left many others who have quit Islam feeling shell-shocked and in fear. BPCA is compiling evidence of the community tensions the rant has fomented which will be included in the Police submission required for a potential conviction.

CI Sansbury has confirmed that a case-file had been passed to the Crown Prosecution Service (CPS) to consider how to proceed with complaints against Preston taxi-driver Zaheer Hussain’s vile rant.

BACA have reviewed the video since our meeting and brought to the attention of CI Sansbury that in only the second line of his pernicious rant, Zaheer Hussain looks over to his colleague in the vehicle and gives him the order to ‘Send a message bro’. We believe this is evidence of his desire to disseminate the video publicly.

The incident began with a video of a baptism that was inadvertently shared by someone sometime after the baptism which occurred on 4th December 2018.

Sadly the video came to the awareness of hate-speaker Zaheer Hussain who quite immediately produced his intolerant rant calling for death and buggery of all Ex-Muslims, whilst driving in the Moor Park area of Preston. Within the video Zaheer Hussain and his colleague threatened to rape the two targets in the baptism video. You can watch the rant in the video below – please be aware some of the language used is extremely foul, vulgar and offensive:

You can also watch the video by clicking (here)

We have been in detailed discussions with several police authorities in order to help them establish facts surrounding the case.

The two men have insisted they do not want any personal details of their story published and we are honouring their decision however BPCA has given some assistance and a potential safe house. They have been vigilant in their prayers for peace and have stated that they have no malice against any Muslims or people of any diversity.

BACA have now located a further threatening video filmed by another radical Muslim that is currently being shared on social media. It seems to be one of a series of two and although no copy of the first video has been found, the producer of the video describes in the one that we have found that personal names and addresses had been shared in the first video and direct contact made with the family of one of the men. The video has been shared with the police.

Zaheer Hussain was arrested on suspicion of religiously aggravated harassment in December after a video of him making seemingly derogatory comments about Christians was posted on social media. The arrest was instigated after a series of complaints were received by several different members of the public from across the country.

Zaheer Hussain, who is from Preston, has since apologised for his comments and has surrendered his Preston Taxi Driver badge to Preston City Council on 9th January 2019.

“During the course of the hearing, the driver agreed to hand-in their Hackney Carriage driver’s licence by the close of business today, and has already done so.

“This will be in effect until the completion of the related police investigation and any subsequent legal processes.

“The driver will be unable to drive a Hackney Carriage in Preston until reappearing before the Taxi and Miscellaneous Committee for a full licence review.”

Zaheer Hussain shared a video in which he apologised for his violent tirade, which can be watched (here). However BPCA is not convinced his apology is genuine and believe it is simply a reaction to being caught.

Worse still our research has uncovered that Zaheer Hussain may have been involved in a previous assault when working as a Taxi driver. The Lancashire Post in a news round up dated 03.04.07, stated:

“DEEPDALE: A taxi driver has been convicted of assault and criminal damage after a trial at Preston Magistrates Court. Black cab driver Zaheer Hussain, 30, of Deepdale Road, will be sentenced for the offences on April 20. Mike Thorpe, head of licensing and electoral services at Preston Council, said: “It is council procedure to review drivers’ licences when they are given this type of criminal conviction and the Taxi and Miscellaneous Sub Committee will decide what to do on Thursday April 19.” Read original article (click here).

The name age and location of the driver are a perfect match for the Zaheer Hussain who made the recent hate-filled rant. If that previous crime was commuted by the same taxi-driver you would hope this time Preston Council would be more assertive and terminate his right to drive a Taxi – it would seem he is truly a danger to others!

BACA have been speaking with local converts from Islam to understand better what impact Zaheer Hussain’s evil rant has had on their lives, Rebecca Ahmed, said:

“My husband that I have now been married to for just over 10 years was a convert from Islam to Christianity. We all left Birmingham 5 years ago as it became nigh on impossible to continue living amongst the abuse we were targeted with.

My daughters were physically attacked in school in a decade long crusade against us – It has been dreadful.

Even now My husband still suffers from panic attacks.

We eventually chose Lancashire as a place of sanctuary in particular Preston and have been living here in peace to date.

However, there is a large ex-Muslim community here in Preston and they are all deeply upset, worried and alarmed by this taxi driver Zaheer’s threat’s of rape and violence.

As a community they feel fragile and vulnerable and having said the above it is only right that Zaheer Hussain is charged for his violent tirade.

“Since Zaheer’s video surfaced our family have been petrified and shocked that this could happen in a place so quiet and peaceful like Preston.”

“Zaheer Hussain’s case has been thoroughly investigated by Preston Police Authority and we we strongly believe our assistance to their investigation will lead to a prosecution.

“The impact of the hate filled tirade by Zaheer Hussain has placed the target families in turmoil.

“The thoughtlessness and hate that Zaheer Hussain exhibited has fomented serious death threats towards his target.

“Anything less than a prosecution will only serve to ignite more hate – as hatemongers like Zaheer Hussain will be buoyed by any illustrated impunity.

“Our existing laws need to allow more flexibility for judges and juries to penalise hate-speakers who share such vile rants in a small group – especially where their despicable messages are then easily and inevitably shared across social media to galvanise an extremist response.

“For too long hate preachers have been able to defend their intentions by stating that they themselves never intended to share the content of their hate-filled malice on-line or with the public – this deflection must stop.

“We also need to strengthen existing hate crime legislation so they better protect victims of the burgeoning social malaise of apostasy hatred.”

The local Christian community surrounding both men have well supported them during this time and also provided for the multiple relocations. Local police have also taken seriously the dangers they face and provided support. BACA has given some financial and moral assistance and have offered a potential safe house if needed in the future. If you would like to add to our emergency fund for help for victims of apostasy hatred please donate (here)

Almost one year on from murder of Zainab: Brave girl (9 yrs) who bit hand of would-be-rapist thwarted double-child abduction

Imagine yourselves having to go to church, with armed sentries guarding the entrance to the colony, and standing guard at the doors of the churches