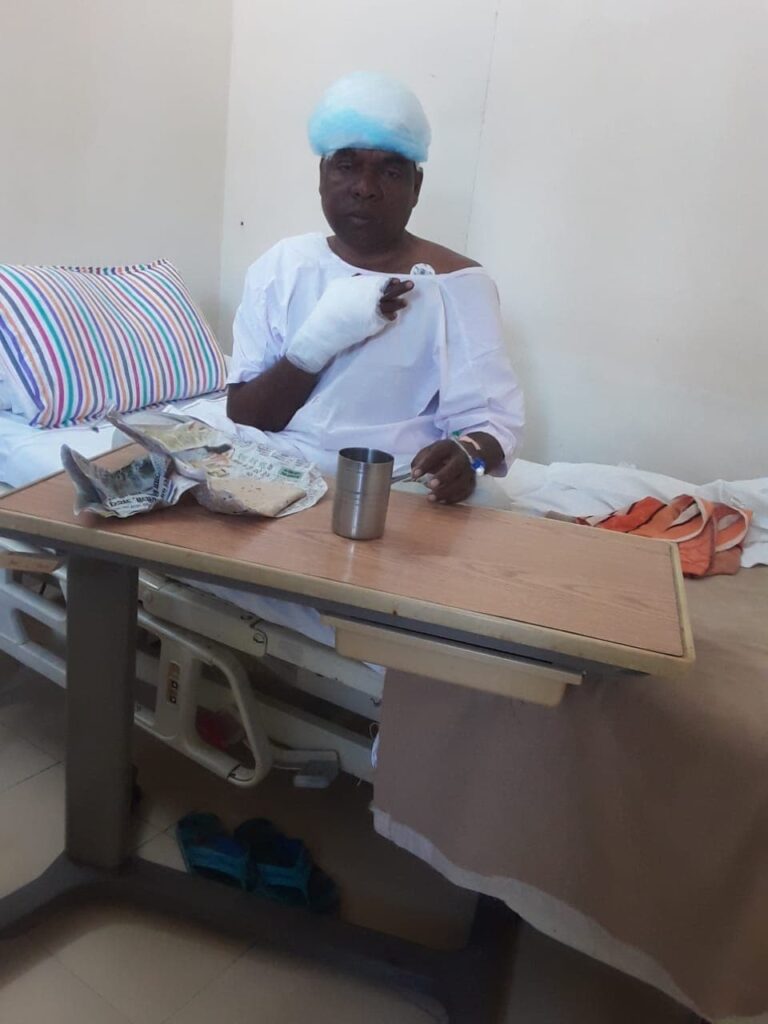 We reported on the stabbing incident of Pastor Narendra Besra (46 yrs) that occurred on February 4, 2022. He took several stab and slash wounds to his shoulder chest, hand, and head in a possible murder/assassination attempt.

The attack occurred while staying over night in a village called Baghima-Pahantoli , where he had been visiting church members (click here).

Pastor Besra is, “thankful to the Almighty Lord,” that the “the Lord saved” him from a violent attack. He has thanked our donors and officers for helping him recover by paying for his hospital treatment.  He has been told by dcotors that he should rest his hand for 6 months while he recovers as it is still repairing.

He is calling for prayers so that his hand heals soon. He expressed  deep thanks to BACA and wants them and all those who stand with them to know that “he is praying for them them too.   In the video he praises the Lord and hold up his injured hand to thank God and to pray for all.

It is unknown at this time when pastor Besra will return to his preaching and his church work. However, he hopes to be able to share the Gospel again soon.

Police continue to investigate his attack but due to few leads it may be impossible to discover the identity of the attacker.  Pastor Besra has previously been threatened by RSS affiliated groups including Shivensa, and it is believed that the attack was carried out by them.  His attack was featured in local media: 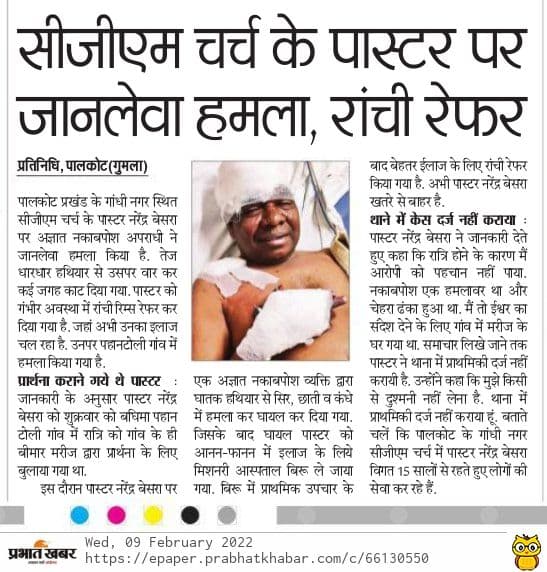 Paster Besra, lives in the district of Gumla in  Jharkhand.  For 15 and a half years he has been preaching the Gospel in the same area. He said:

“Many struggles came to me during this time.

“Friends & loved ones have often told me that it’s an unsafe place to preach the words of the almighty God, but it was God’s will that I continued to preach in the area and I have done so.

“I was attacked with a huge sharp sword on my head and body it was an attempt to kill me.

“God had other plans however and I have survived, may His name be praised forever.”

After the incident Pastor Besra was taken to CMC Biru Hospital nearly 80km from Palkot.

“When I reached the hospital doctors and nurses cleaned and dressed my wounds.

“They had to refer me to another hospital ‘Life Care Hospital’ In Ranchi.

“I was treated in an operation theatre by a Christian doctor for 8 hours.

“I was placed on complete rest for two weeks in the hospital only and discharged on 18th February.

“I have had to stay longer in Ranchi while I get more treatment.”

British Asian Christian Association are funding his hospital treatment and have sent across 30,000 Indian Rupees (£300).  We will be sending further funds as he presents invoices to us and expect the total amount to cross £700 including physiotherapy.  You can help us care for Pastor Besra and other victims of violence against Christians in South Asia by clicking (here).

The Gospel is on the move – Pakistani Muslims come to Christ!