By admin25 October 2018No Comments 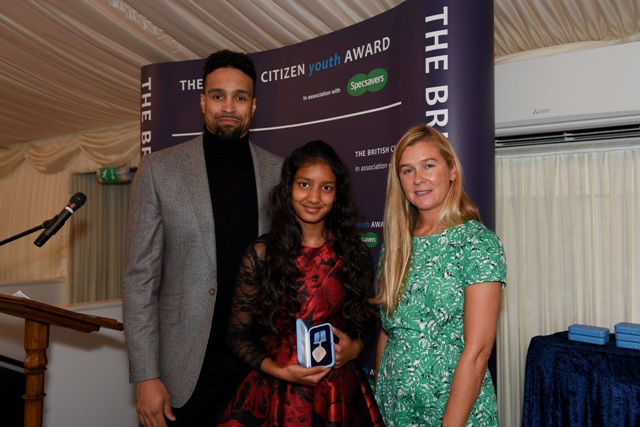 A 14-year-old local schoolgirl and community campaigner has been honoured with a prestigious youth award at a ceremony hosted by Diversity star Ashley Banjo in London.

Hannah Chowdhry, who attends school in Ilford and lives in Chigwell, received a British Citizen Youth Award – sponsored by Specsavers for the third time in 2018 – alongside other inspirational children and young people from right across the UK at the ceremony held at the Palace of Westminster on Thursday 18 October 2018.

Hannah launched her first local campaign at the age of seven, which led to a £50,000 mammoth skull replica being given a home at Redbridge Museum for local people to enjoy. More recently she has helped raise funds and gain permission for a nativity scene to be reinstated on the steps of the town hall in Ilford.

She has also helped local police tackle the use of drugs and legal highs in the local area working with the East Ilford Betterment Partnership, and is an experienced campaigner and public speaker for the British Pakistani Christian Association.

In her work for them, she has spoken to over 1,000 people at Westminster Cathedral about the treatment of Christians in Pakistan – and was invited to an EU conference on minority persecution in the country. She has also spoken out about the case of Asia Bibi, who currently faces the death penalty in Pakistan on blasphemy charges.

Earlier this month, Hannah defied expectations again by completing her Bronze Duke of Edinburgh award in half the usual time. She also represents her school in swimming, football and badminton – and has won a national badminton competition and local football tournament.

Hannah has achieved all of this despite suffering from juvenile arthritis, which she never allows to hold her back.

Wilson Chowdhry, Hannah’s father, said: ‘We are incredibly proud of Hannah. She is a really community-spirited person, and is intent on improving where she lives and goes to school for the benefit of everyone.

‘She has always had a tremendous sense of community responsibility, and really wants to make the world a better place. She never takes no for an answer, despite the challenges that her juvenile arthritis brings. She is a real inspiration to us, and we hope she will inspire others too.’

The British Citizen Youth Awards are run in association with optical chain Specsavers. Their purpose is to recognise young people who are making a valuable contribution to their community, society or a chosen cause.

Saleem Ismael, store director at Specsavers Ilford, said: ‘Hannah is a really inspirational young lady, who has achieved an amazing amount at a really young age. None of us in store can wait to see what she does next.

‘The British Citizen Youth Awards are a real celebration of the part that so many inspirational young people play in making their local communities, and wider society, a much better place. Long may they continue.’

The British Citizen Youth Award (BCyA) recognises individuals under the age of 16 that positively impact others and highlights the positive aspects of multi-cultural communities, workplaces, community groups and charities throughout the UK.

The British Citizen Youth Award is held in association with the world’s largest optical retailer, Specsavers.

Nabeel Masih, Pakistan’s youngest ever blasphemy victims who was convicted at only 16 years of…