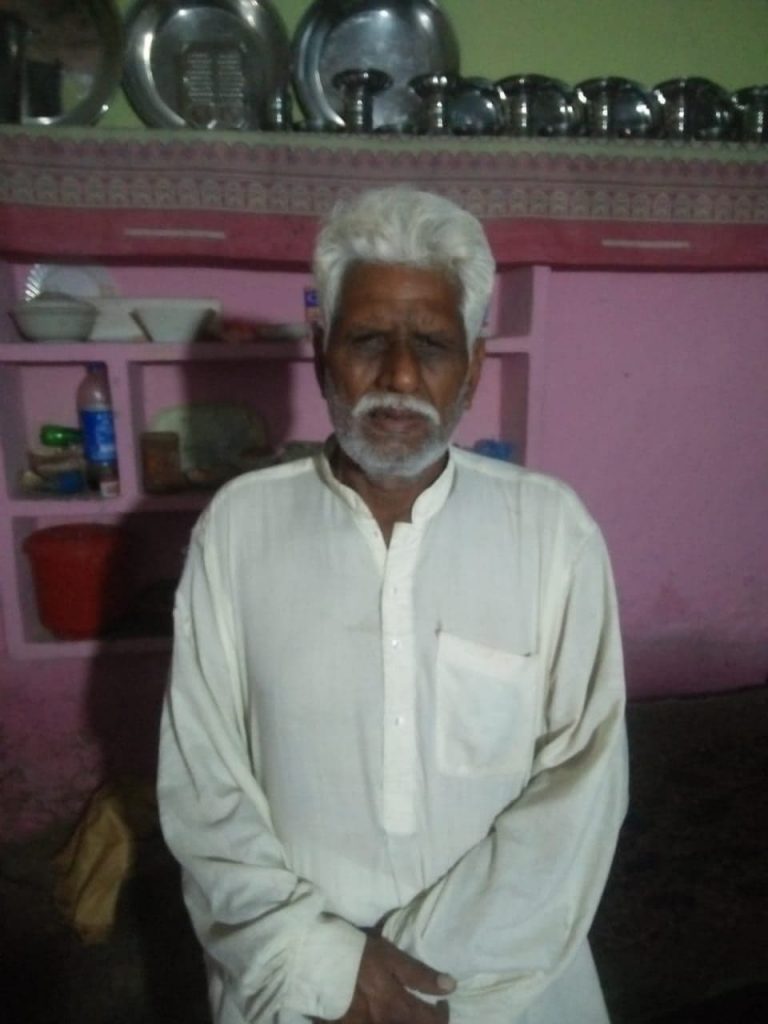 Ghafoor Masih (56 yrs) – Brave father of slain Saleem Masih continues to fight for justice despite threats he will be killed.

Saleem Masih (22 yrs) was beaten to death for rinsing himself off in the tube well of Muslim land owners in Choonia District, Kasur. It should be noted that many Muslim men have been permitted to rinse themselves off in the well for many years, however it was the fact that a ‘ritually unclean’ Christian dared to use the well in this fashion that led to his murder. Read more (here)

British Asian Christian Association have been paying for a solicitor to help father Ghafoor Masih get justice. On 8th April 2021, arguments were partially heard and the court was adjourned for 10th April.

On 10th April, Honorable Additional Sessions Judge, for District Court Chunian, Miss Aysha Khalid heard the arguments from both sets of solicitors. At the end of the session she ordered the inclusion of Shera Dogar and Ali in the investigation.

The order of the court narrates as follows:

“The involvement of the accused persons shall be determined in a fair trial and on the basis of a preliminary inquiry, there is sufficient material to proceed this matter further.”

The court has summoned Shera Dogar and Ali, the two accused of the murder of Saleem Maish, to court for 26th April.

“The police investigation was mala fide (in bad faith) and I requested for the court to examine it.

“My argument was supported by the statement of Ghafoor Masih and the Honourable Judge was satisfied.”

It is believed that the summons issued to the names of Shera Dogar and Ali Shehzad has created greater impetus towards justice.

Till now both the accused men have been free and trying to force Ghafoor Masih and his family to come to a compromise under Pakistan’s notorious Qisas and Diyat laws. These are Sharia laws that allow for perpetrators of crime to evade justice through paying a compensatory payment. A law which has let many murderers and rapists back out into the wider world. The advent of the two murderers being included in the trial, means that they will now have to face a trial and cannot coerce or bribe to escape justice.

“I thank God for this wonderful solicitor who has changed the direction of the murder trial.

“I believe in God’s strength we will see justice for my son.”

Some of you will be wondering why a solicitor is needed to put murderers on trial. This is very common in Pakistan where the police force is extremely corrupt and liable to bribe themselves. One of the biggest flaws in the challan (official report) submitted by police to the court, was that it didn’t specify the role of any culprits in the murder of Saleem Masih. BACA funded Advocate Sumaira Hussain has brought it to the notice of the court and we now hope justice will be swift.

“The delay in progress of this case seems to be based on Police malpractice.

“Our advocate has got us beyond this hurdle but the process has illustrated how hard it is for a deprived Christian to obtain justice.

“That murder and rape cases in Pakistan can be thwarted by paying a fee or bribing an official, is the poorest indictment for the nation of Pakistan.

“The country is in need of serious reform.”