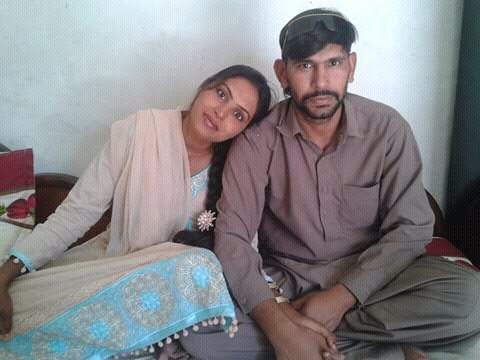 A man who was convicted for alleged blasphemous remarks on Facebook two years ago, has been set free and is now working full time with the BPCA.

Despite the three men having beaten Mr Liaquat so brutally that he was left with severe head injuries and needed emergency treatment Police officers ignored the tangible evidence and pressed charges for a blasphemy case, that led to two years imprisonment for Mr Liaquat. Mr Liaquat was later acquitted of all the charges due to a lack of evidence and received no compensation for his families upheaval or the trumped up charges that led to his unjust incarceration.

The discord arose after the named youths began a prolonged sexual harassment of Christian girls in Care Foundation School in Sheikhupura, including Mehnaz Noor (18 yrs), the sister-in-law of Mr Liaquat.

The male gang would block the girls paths in the corridor, write crude messages on their lockers and write vulgar letters and text messages to them. When the girls reported the matter to teachers they did little to resolve the matter. The last straw for family members of the young women and girls was when the male gang then tried to use a derogatory social media campaign to coerce the girls into giving them sexual favours.

With no option before them the father of Mehnaz Noor named Noor Masih (52 yrs) and Mr Liaquat met with the family members of the young men and explained the situation. Surprisingly the parents seemed to have some compassion and ostensibly asked their sons to stop their aggravation of the Christian girls. The young men even paused their activity for a while but not for long and soon they were re-harassing the girls.

On the 23rd of May 2016 at 7am in the morning the male gang also stopped Mr Liaquat in the road on his way to work and told him not to interfere with their activity again or he would face grave circumstances. Incensed by their audacity Mr Liaquat informed them he would be visiting the local police to initiate a First Information Report (FIR).

Mr Liaquat’s threat of involving the police enraged the male gang who began to beat Mr Liaquat with sticks and bricks and kicked him viciously when he fell to the floor. Mr Liaquat had severe bleeding from the left side of his head, back and neck from lacerations caused by the violence.

Realising the violence would implicate them in a crime, one of the cousins of Ehsan named Mujahid Ali Virk (25 yrs), helped Mr Liaquat up placed him into his car and drove him to his in-laws warning Mr Liaquat that any further action would be met with more violence. On arrival to his In-laws Mr Liaquat received some first aid from his family who were extremely worried about the situation. They suggested that Mr Liaquat went to the local police to report the attack so that the youth involved in the attack received some appropriate punishment and Christian girls at Care Foundation School received some protection. Mr Liaquat was also advised that the male gang members were visiting local police to place some trumped up charges against him but he had no idea what charges they were laying against him at the time.

Mr Liaquat travelled to Factory Police Station at Kot Abdul Malik, Sheikhupura to register an FIR, and a police officer wrote down the details of the incident and took a payment of 150 rupees to register the complaint. Mr Liaquat explained the whole incident including the harassment of Christian girls and the attack he had suffered. A copy of the FIR was them issued to the family members of the Muslim gang and Mr Liaquat. Mr Liaquat was then taken to Rural Health Centre where an assessment and then treatment was given to Mr Liaquat who was asked to return the next day for an x-ray.

Later on the same day the Muslim gang registered an FIR against Mr Liaquat stating that he had committed a blasphemy. This was purely a defensive measure as they had realised that the criminal offence that had been laid against them and the evidence that Mr Liaquat had, could lead to their arrest and conviction.

The next day (24th May) on arrival at the police station for an agreed rendezvous with a police officer who was to accompany Mr Liaquat to the X-ray appointment, Mr Liaquat was surprised and horrified to learn about the counter-charges laid against him. Despite his remonstrations that the charges were baseless the police said they had to investigate as Muslim witnesses had testified to the crime. They sent a police officer to accompany Mr Liaquat to the Rural Health Centre so that he could obtain the medico-legal certificate required for the investigation into his being attacked to continue.

When he arrived at the hospital he and the Police officer were met by the Muslim gang who somehow knew his whereabouts. They started shouting at him calling him a blasphemer and the situation was getting very dangerous. Inspector Iftikhar contacted the police officer and told him to return to the police station with Mr Liaquat who was to remain in custody.

Mr Liaquat found himself being frogmarched to the police station where he was locked in a cell. After 15 mins Inspector Iftikhar visited the cell along with the boys some of their cousins and a Molvi (Islamic cleric). In the cell a strange form of inquisition began which started with Ehsan Virk initially stating that Mr Liaquat had sent blasphemous text messages to his phone. However when Inspector Iftikhar asked to see the messages and discovered none could be found Ehsan Virk then stated that the messages had been sent by Facebook. When Inspector Iftikhar then asked for the ID and password for Ehsan’s Facebook profile and discovered no sight of any blasphemous message, Ehsan then altered his story again to say that he had deleted the message but had a printed copy of the offensive post. Ehsan warmed the Inspector that if a blasphemy charge was not registered the gang would make the situation worse and stated he would later provide a copy of the blasphemous text. At this point the Molvi started shouting at the inspector and demanded registration of the FIR to which Inspector Iftikhar caved in and complied with the request by making official the blasphemy charges against Mr Liaquat.

Initially police denied when asked by media that blasphemy charges had been laid against Mr Liaquat. His family were hounded out by the Muslim gang and a mob they had formed gathered outside Mr Liaquat’s home calling for the women to leave the protection of their home to be dishonoured in the same way that Islam had been dishonoured. The family were forced to flee to a cousin’s home far away escorted their by the local police.

Mr Liaquat, described what happened next, he said:

“On 29th May 2016 at 12 am I was taken to the DPO Sheikhupura where I was tortured and beaten in an attempt to make me accept that I had committed a blasphemy. I stayed resolute however and suffered without implicating myself. The pain did not matter it became dull after a while, i just knew I had to stay alive and maintain my innocence for the sake of my family.

“After 10 days I was allowed to meet my family who told me that police had taken my mobile phone and laptop into their custody. I stayed in prison for exactly 19 months and I counted the days with anger and bitterness as I knew I was innocent and the real criminals had been ignored because they were Muslim.

“I began to regain my mental poise and confidence. I realised that I was not alone and worshipped God fervently. He spoke to me and and told me that he kept me alive when I could have been killed by my persecutors or the police. He told me I would be set free again in record time and I chose to believe – that is what stopped me going insane like many of those around me.”

On 16th Feb,2018, at Sheikhupura Court, Justice Muhammad Moeen Khokhar, the Additional and session judge of Ferozewala, Punjab Pakistan, announced Mr Liaquat’s acquittal from jail. The acquittal was based on their being no satisfactory evidence of a blasphemy.

Despite nearly two years of incarceration under false charges no compensation was given to Liaquat and he found himself destitute.  Despite this Liaquat bears no bitterness, he simply wants to move forward with his life and protect his family a role he believes in the most important stewardship role God places on a husband and father. He said:

“What use is anger? It will not bring my two years back.

“I am free and God has shown me grace and I thank Him with all my heart.  I am his eternal servant.

“Those men who caused so many women so much grief and kept me from my family will be accountable to God one day.  I hope they change their ways and seek God’s forgiveness by first coming to Christ.  If not their lives will be forfeit and they will suffer for longer than I have.”

British Pakistani Christian Association, have since helped Mr Liaquat by providing him a full-time role working as a caseworker.  Already he has been mentioned on our blog when he visited the grave of a slain domestic servant to pray with and offer help to the bereaved family (click here). Liaquat’s desire is to serve God for the rest of his life.  He realises that God has blessed him with a miraculously quick release from a Pakistani blasphemy charge.  He now simply desires to help share the love of God that has helped him survive through one of life’s toughest situations – we will help him share his epiphany.

“It is rare for a blasphemy victim to be released after only 1 year and 9 months – if not a miracle. The trumped up charges laid against Liaquat reminds us how dangerous life for Christians in Pakistan has become, where a Muslim needs simply utter the words blasphemy to seek revenge for the smallest disagreement.

“The weak rule of law and the corruption of police who can be bought for a pittance or coerced by forceful Imams is an ongoing concern that needs a serious resolution, if justice is ever to prevail in the country.

“In the meanwhile use of the blasphemy laws to settle personal vendettas will continue to proliferate.

“God has chosen Liaquat for great things I am sure.  His understanding of God’s love is a blessing to all he meets and his moving testimony has brought many to tears. BPCA is grateful God has provided us with the opportunity to make Liaquat’s passion to help others receive the knowledge of such love come to fruition.

“We will continue to work with Liaquat to help rebuild the shattered lives of so many suffering Christians in Pakistan.”