Pak-Christians should not use humanitarian protests for party politics 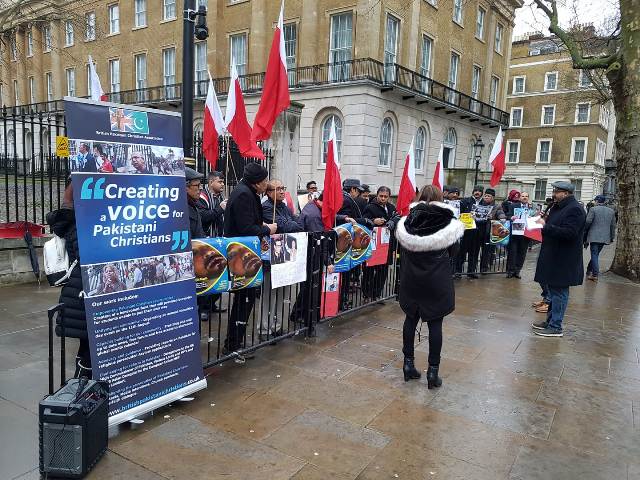 Image of alarming protest for Pakistani Christian victims Sajid and Patras Masih which had large red and white political flags with Islamic images and no posters for the victims till BPCA arrived.

Last weekend was the most chaotic weekend of BPCA’s history.

After a group of Pakistani Christians organised a protest we agreed to support them for a protest on Saturday 3rd March and even had it mentioned on a Premier Christian radio story.

Without consultation the lead group called Overseas Pakistani Christians cancelled the night before and shared their news over social media, meaning we could not do anything about it and we spent Saturday apologising to many of you who turned up for the event.

When the cancellation was shared we agreed to support a second protest on Sunday 4th March that another group called International Christian Council, led by Ex-Muslim Taskeen Khan had organised.

We were really surprised to see large red and white Islamic flags there and to be addressed by mainly Muslim speakers in an event that had little Pakistani Christian participation. Ex-Muslim Taskeen Khan and an alleged Pak-Christian named Amram Yousaf led the protest. Taskeen has always had a strong affiliation with Muslim political parties some of whom are very radical, however we did not realise that he was organising the protest in this fashion.

Wilson Chowdhry and his wife left soon after arriving at the protest when we realised the taste of the event was not very useful for our overall campaign, especially with some very aggressive chants being shouted and Muslim Quranic verses and prayers being read at the same time as Christian prayers by the sole Pastor in attendance. Interservice events such as these are not condoned by the BPCA.

We do not mind Muslims joining Christians for protests we all need to come out in solidarity but it undermines the whole process when they dominate such events.
Especially considering the raft of active proponents amongst the Pak-Christian community in the UK. This was a very ill-devised protest by Christians whose desire was party politics over any humanitarian value. As a group we have decided not to attend protests organised by other Pak-Christian groups in future.

“It was very alarming to arrive at a protest that meant to appeal for justice for two Christian victims of the blasphemy laws of Pakistan, but  was dominated by Islamic logoed political flags and qur’anic verses .

“I was incensed by the lack of foresight by Taskeen Khan’s group International Christian Council and Amram Yousaf who both coordinated one of the most shambolic protests I have ever seen.  The event reminded me of when our Lord Jesus Christ made a whip of cord and overturned money changer tables to the ground in his anger at the desecration of the temple.

“I feel ashamed that our banner was up, but at the time we assumed other Christians would be joining us.  The few Christians that were seemed as shocked as me at the proceedings and I felt no option but to leave after 5 minutes, after making my feelings known publicly.  Sadly that means no effective protest was held for the two cousins Patras and Sajid Masih who deserve our support in more real terms.”

“Please pray for many of our Pakistani Christian brothers and sisters who have a very warped theology based on having had to survive in a hard-line theocratic state.”

Britain have raised the UK’s Islamist Terrorist threat levels to ‘Severe’ on the basis of attacks on the continent – but should this ever have been lifted?