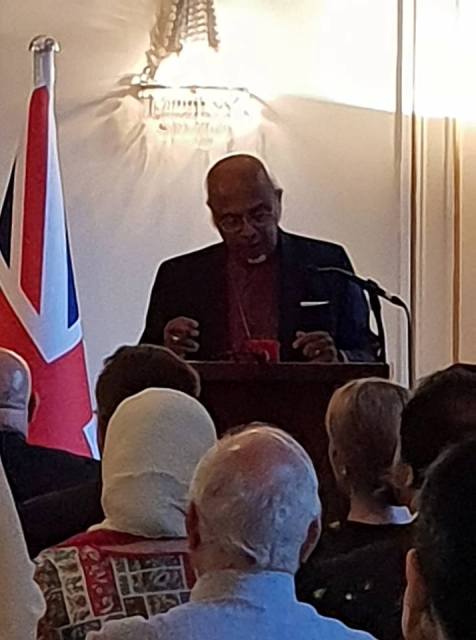 On August 8th 2018 the Pakistan High Commission in the UK held a Seminar on the, Contributions of Minorities of Pakistan in Nation Building held at the High Commission’. The event was attended by about 50 people including our Chairman Wilson Chowdhry.

The event was the event was jointly organised by the High Commission and the World Congress of Overseas Pakistanis (WCOP) to pay tribute to the significant contribution of minorities of Pakistan in the fields of health, education, defence, politics and other areas of socio-economic development.

The event was the first of its kind to be held at the High Commission London and came only a few days before Minorities day held on the 11th November.

The most important message was from Bishop Michael who presented the history of the Christian Church in Pakistan/India which significantly predates Islam. The disciple Thomas is most notably is said to have visited Texilla near the nations current capital nearly 2000 years before .  Bishop Michael went on to describe a Christian quarter for soldiers working in the Mughal Army these soldiers placed Christian iconography in Lahore Fort.  He also told the location of the oldest known surviving church in Pakistan from Emperor Jehangir’s time in the 17th century. Then the first British Raj church in Karachi installed in 1855 it was truly a remarkable speech that highlighted the long term existence of Christianity in Pakistan long before British missionaries arrived.

Most importantly he cemented into the knowledge of many who had not heard before that the Christian vote was extremely influential if not essential in bringing to fruition the creation of Pakistan.  He said:

“…Christian support for Pakistan was renewed by the prominent Christian leader, Dewan Bahadur, SP Singha, the Speaker of the Punjab Provincial Assembly, at a meeting with the Quaid and other leaders of the Muslim League in 1942. In his reply the Quaid told the Christians, ‘If you will join us we will forever be grateful to you’.

“The Christian community had worked for the inclusion of the whole of the Punjab into Pakistan.When this proposal was rejected, the Quaid, and other leaders of the Muslim League, had a special meeting with Christian leaders to ask for their support for including West Punjab into the new nation.

“At the time of voting, those in favour and those opposed to this proposal were tied 88-88.The Christian members, SP Singha, Fazal Ilahi and CE Gibbon, cast their votes in favour of West Punjab becoming a part of Pakistan.It is because of these votes that Pakistan became a viable entity!”

So there you have it unequivocally and I say this because not one Muslim in the room attempted to deny this truth, a truth that has been ignored in the national curriculum of Pakistan, where it has never been taught. Moreover media groups in Pakistan have tried to usurp the truth by sending out spurious news stories (click here), denying a fact that if shared could help to galvanize stronger social harmony.

Mr Chowdhry, was encouraged by the boldness of Bishop Michael who did not shy away from explicitly detailing that Christians suffer great persecution and discrimination in Pakistan, a fact that other Christian speakers failed to address, choosing simply to speak positively about Pakistan to ensure they got a repeat invite.  He said:

“Bishop Michael has long been a loud proponent for the rights of Pakistan’s minorities and he did not let his guard drop or allow any personal motive to prevent a true account of the reality on Pakistan, and that should be commended, he has been a great blessing to our community.

“Moreover, I was surprisingly pleased by the actions of the High Commissioner who did not try to defend Pakistan but encouraged every person of Pakistani origin to get involved in transforming Pakistan, reminding every one of us that we all have to be a part of that process.

“Pakistan is entering a new period one where we find that Christians are at the very bottom end of society and where intolerance has proliferated to the extent that senior officials and academics are involved in hate crimes and not just illiterate masses.

“Christ said love your neighbour as yourself, we have to pray that people in Pakistan set their hearts to do that.”

The Targeting of minority “Others” in Pakistan “Pakistan”