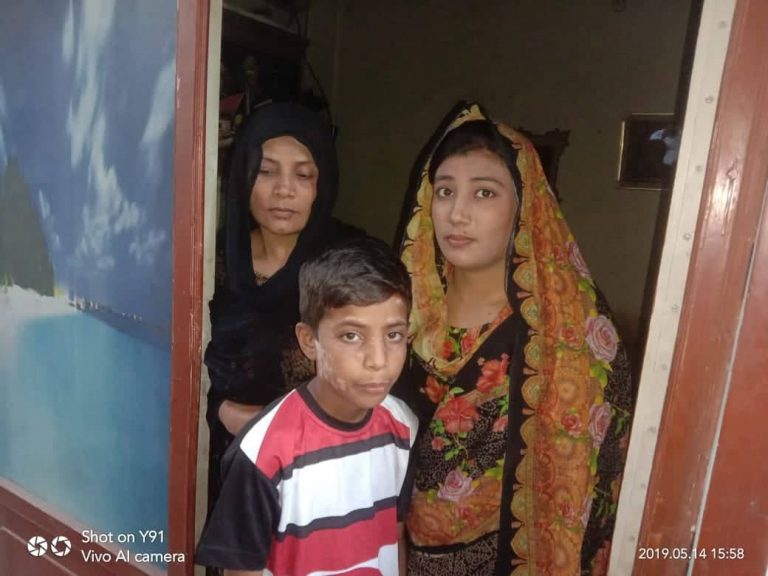 Usually the only help for an uneducated poor Christian woman in Pakistan is to marry herself out of poverty.  The arranged marriage process has its faults but for many Christian families it has allowed social progress through beneficial loving Christian relationships. However for Rita Yousaf the process became a diabolical nightmare – not once but twice!

Rita Yousaf was 23 when she married her Christian husband, a marriage her parents’ thought was a potential ideal escape for their daughter.
Being one of six children, her struggling parents found it tough just to put food on the table and finding suitable husbands for daughters is an opportunity to gift them a way out.

Unskilled young Pakistani men ferally roam the streets and don’t make for ideal husband material, and so when a good candidate did come along, Rita’s parents grabbed him.
Yousaf was a motor mechanic, a skill that was all her parents needed to qualify him and match her parents’ criteria for a husband. But after a time, once the excitement and euphoria of the wedding and honeymoon was over, Yousaf turned to drink and drugs and for Rita, that was when the beatings began.

Peer pressure convinced Rita to enter into motherhood despite her own reservations about being impoverished but she was persuaded that her husband’s hitting would stop once he became a father and over the following 16 years she gave birth to four children Fiza 17, Yeshua 15, Rabiya 13 and Eleesha 11.

When the beating didn’t cease, Rita finally divorced Yousaf citing his abusiveness and reluctance to take on the responsibility of fatherhood seriously enough, as just grounds for ending their relationship.

Rita felt she had no choice but to move back in with her parents at their home at Mozang, Lahore during 2016 – who themselves were struggling financially and endeavouring to keep her children fed.
To make ends meet, Rita took up a job as a maid, work her husband never wanted her to do, but she wanted to put the ghosts of a failed marriage far behind her and start a new chapter in her life.

Rita initially agreed to an interview with BPCA on Camera, but found it difficult but has asked us to share her video so that you can palpably feel her anguish.  She later recounted to BACA representative, Mehwish Bhatti, the full details of her suffering and states that she can now only afford to feed her children once a day.

One day in December 2018 a Christian neighbour, Kiran Baji, mentioned in conversation to Rita’s parents that there was a Chinese man who was interested in marrying their daughter.
At first her parents had reservations and couldn’t imagine their daughter marrying again especially now she has four children and told her neighbour that in their religion this would not be allowed and in any case, Rita would not be accepted by the Chinese community.

Even Rita’s children were against the idea, but Kiran Baji was persistent, insisting Rita would be happy marrying this Chinese man who would take care of her and the children would have a happy life in China.

Rita describes her parents as simple and blames them for not making enquiries about the neighbour, Kiran Baji, her acquaintance with the mysterious China man and how all this is going to work out for her.

All they knew about Kiran Baji was that she was middle aged, about 40ish, not married and was living with her elderly mother.

If this China man was so interested in marrying Rita, then why did he not marry her instead?

Kiran Baji said she could never leave her elderly mother as there is nobody to look after her and so she has decided never to get married. Gradually Rita’s family became more used to the idea of marrying the Chinese man and decided to meet his family.

Xin Pel Xu drove up in a big car along with another Chinese man and a Christian Pakistani man who acted as interpreter. Xin Pel Xu remained gentle with Rita throughout the meeting and she took the opportunity to question Kiran Baji about him extensively. Was he really ready to look after her and her children? “Yes, he has no problem with this, Xin Pel Xu is a kind man” Kiran Baji replied.

Rita was told that soon after the wedding she will be taught Chinese and then her visa process will begin, and it was agreed the wedding would be paid for by him along with all their expenses. He promised them a good future. Rita’s parents thought they had made amends for their mistake of choosing her first husband, Yousaf, with the choice of Xin Pel Xu as the second by securing not only their daughters future but that of her four children too.

[Marriages between Pak-Christian women to Pak-Christian men abroad are very common often because of the desire for Pakistani Christian parents in the west to retain their culture and heritage and the stricter adherence to older customs by migrants to the UK. In fact a larger percentage of Pak-Christians in the UK undertake arranged marriages than those in the homeland who are increasingly moving towards ‘love marriages.’ Arranged marriages between Pak-Christian women and men of non-Asian descent are not unheard of and many of them have proven to be very fruitful – BPCA is aware of several mixed-race marriages of this type in the UK.]

So, on the 2 January 2019, Rita married Xin Pel Xu at her parents’ home with only her immediate family members in attendance along with a Chinese friend of Xin Pel Xu, the Pakistani translator and Kiran Baji. The Christian wedding was conducted by a Pastor friend of the translator. Soon after the wedding Rita and her children were taken to a large 4-5 bedroom house in Multan Chongi, a house, shared with 6 other Chinese men and their Pakistani wives.

Rita found Xin Pel Xu’s behaviour was strange from the beginning that she put down to the language barrier and didn’t speak to him in the first month. Rita asked Kiran Baji to ask her husband to pay for her children’s expenses, but he said could not till he got back to China.

She bore things at first till matters got worse when she was forced to have sex with the other six China men.

Rita was not even allowed to talk to the other Pakistani girls and strict monitoring of their behaviour was enforced, violation of which resulted in a bad beating and for the next three months, communication with their families was restricted to telephone conversations in front of Kiran Baji where they were told what to say.

Every night was difficult for Rita and she would be beaten if she refused to have sex with any of the men and threatened to be taken to the Police station.
Kiran Baji told Rita that if she did not agree to prostitution, she would have to pay a high financial penalty in accordance with their pre-nuptial agreement or if she divorces Xin Pel Xu or if he divorces her.

Despite catching Typhoid, Rita managed to escape back to her parents but has not heard since what happened to the other girls. Since Rita’s story broke in the press, all the men went into hiding and justice for Rita has still to materialise and all the while her circumstances remain worse than before.

“Recent reports suggest hundreds of Pakistani Christian girls have been falsely married to sexual predators from China who have then forcibly placed the girls into sexual slavery or brutal relationships with men who are not Christian and prevent them from adhering to their faith.

“These marriages are brokered as an opportunity for progress for the Christian families – they are not a financial payout for the impoverished Pak-Christians but a marriage pact between the husband that would yield potentially his most loyal friends and admirers.

“The broken promises leave families in great depression with mothers and fathers blaming themselves for poor choices.

“Some marriages work out fine and we can show a video below, but the majority of marriages to Chinese men has been a debilitating experience for Pak-Christian families.”

“Broken-hearted families have been left searching for their daughters afraid of what has happened – a promise of hope has become a devastating blow of ignominy.

“It has been heart-warming to see that every Christian girl who has escaped the brutal situations they were in, has been welcomed back to their loving families – a clear illustration that these marriages are not seen to be a trade or transaction.

“Misinformed families have paid a high cost for their trust and desire for progress and Pakistani and Chinese authorities must both do more to protect these vulnerable girls rather than defending their own position and blaming each other.

“There will be a mix of duped Pak-Christian pastors and those who have been corrupt in their undertakings – those found to be implicitly involved in the crime must be dealt with by the full severity of the law, an example must be made to protect these girls.

“I pray for freedom for all the captive women and for every person who is involved in the criminal trafficking of these innocent girls to be caught and their operations terminated.”

Rita and many other Christian girls who have escaped Chinese abductors (often with the help of their parents and international agencies have asked for help from BPCA. Assistance sought ranges from trauma counselling, financial support, halfway houses and educational support for their children. We are planning to begin a major halfway house project that would provide all the requested assistance. However this is a major undertaking and we will need significant funding for this. To begin the project including rent, financial grants and 24/7 counselling and pastoral care we will require a start up figure of £15,000. If you can help us begin this necessary vehicle for support please donate using one of our many listed payments methods (click here).

A Christian teenage girl gang raped by 5 men, has been moved, along with her…