By admin5 December 2009No Comments 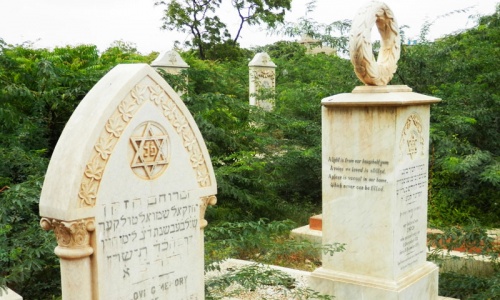 Jewish Graves still in Karachi a remnant of a more peaceful integrated past.
Share
Facebook Twitter LinkedIn Pinterest Email
Many of you will be unaware that Pakistan once had a thriving Jewish Community. In particular the City of Karachi boasted a number of Synagogues and at least a 3000 strong fellowship.
A former synagogue and graveyard still exist in Karachi for which attempts are being made to preserve them as part of the heritage of Pakistan.
There remains one openly Jewish person named Fischel Benkhalid and around 900 Jews who present themselves on the National Database and Registration Authority’s census database.  However, they choose to indicate their faith as Muslim on their ID documents to thwart persecution.
During the Arab – Israeli wars of 1956 and 1967 the tension in Pakistan became so intense most Jews emigrated to India, England and of course Israel.
The social ethnic cleansing of the Jewish community of Pakistan is an abhorrent event and highlights the extremism in the country. Not to say, there are not moderates in Pakistan in fact many moderate Muslims are looking for a new age of tolerance in the country i.e. Nafisa Shah, a member of the Pakistan parliamentary committee on minorities who is seeking to amend the blasphemy laws.
Work like ours at the BPCA invites all faiths and those with no faith to collaborate towards peace, unity, hope and an end to persecution, injustice and inequality. We will have greater long term impact working together than trying to fight for justice in individualistic community isolation.
Learn more about the historic Pakistani Jewish communities (click here)
Share. Facebook Twitter Pinterest LinkedIn WhatsApp Reddit Tumblr Email