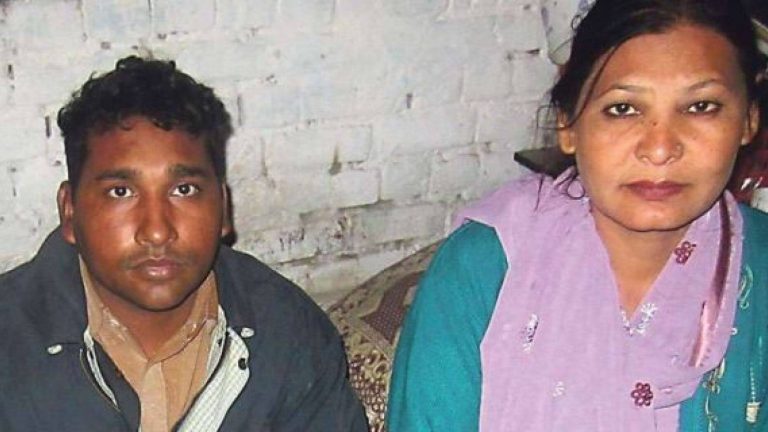 Following the joyous news of Christian Asia Bibi’s release from jail in the early hours of Wednesday 8th May, we highlight the plight of a Christian Pakistani couple who have also been facing execution in a Pakistan prison for five years.

Shagufta Kousar and Shafqat Masih were sentenced to death on 4th April 2014 following a court trial where they were accused of sending blasphemous text under Islamic law to a Muslim man.  Now Shagufta is imprisoned at Multan Jail and Shafqat is 150 miles away at Faisalabad District Jail both have have not seen each other since their incarceration and are exhibiting signs of severe depression.

The couple, believed to be in their late 30’s, hail from the city of Gojra from the Punjab province. They led a simple life and were living with their four young children in a church compound. Shagufta was employed as a cleaner and servant at the local church school.

On 18th July 2013, Muhammad Hussain, a Muslim, complained to his Mosque clerics about a blasphemous text that he had allegedly received on his phone whilst praying and whilst seeking legal advice, he claimed to have received more.

Despite Shagufta and Shafqat being illiterate and unabke to text in English or having an understanding of alphanumeric symbols, local police registered a blasphemy case following the complaint of a cleric.  This resulted in the couple being arrested on 21st July 2019 under charges of both “insulting the Koran” and “insulting the Prophet.”

The police had obtained confessions from Shafqat which both defendants claim was given under duress.  Shafqat has stated to his previous lawyer fighting his case at Toba Tek Singh District Court “To save my wife, I confessed,”

The couple have appealed the sentence at district court level on the grounds that the witnesses produced by the prosecution during the trial were related to the complainant and were therefore inimical towards the couple. The appeal stated: ‘Their statements require independent corroboration, which is lacking in this case.”

Furthermore, evidence exists that Judge Mian Amir Habib, who sentenced the couple to capital punishment, was intimidated by hardline lawyers and religious leaders in the community.

Shagufta, a caretaker at St John Girls High School, Gojra said that her National Identity Card was stolen by a friend of Mr. Hussain who had used it to purchase a SIM card in her name that was then used to send the text messages which the prosecution denies.

Both Shagufta and Shafqat are arguing against their conviction on the basis that there is no evidence that they purchased the SIM involved and adding that as they are both illiterate, could not have possible sent the messages which were written in English.

The couple have also stated that the motive behind the allegations made by Mr. Hussain was that he wanted revenge after a minor quarrel that took place between their children and their neighbours 6 months prior.

Shafqat is currently paralysed from the waist down following an accident in 2004 when he fractured his spine and is also suffering from depression. Moreover painful sores that he has developed since his incarceration are causing a rapid decline in his health which could lead to a premature death.

Mehwish Bhatti BPCA representative were told that the pair have received visitors rarely given the long distance for friends and relatives to travel to Multan jail and for safety reasons the couple are unable to see their 4 children Zain (15 yrs), Danish (12 yrs), Joshua (10 yrs), Sarah (9 yrs).  All the children are said to be looked after by their paternal aunt.

The couple who are being represented by the same legal team that helped Asia Bibi win her freedom led by Saif-Ul-Malook, have had their appeal delayed by an administration error and are still waiting for a new date of a hearing once re-listed.

Saif-Ul-Malook, spoke with BPCA and said:

“This is a sad situation, they did not get a fair trial.

It is believed that a known friend of the complainant who was also working there stole a copy of her National Identity Card (NIC). He then used the stolen document to purchase the alleged SIM card in her name and later misused the SIM card to implicate Shagufta and her husband – colluding with Muhammed Hussain.

However, the prosecution claim that the alleged SIM was purchased by Shagufta along with her husband from a JAZZ franchise.

“The arrest of Shagufta and Shafquat in 2014 for blasphemy sparked a worrying trend of Christians accused for derogatory text messages and social media postings.

“Mobile phones and social media which had up to that point done so much to help build the campaign for persecuted Pak-Christians began to be the very tool used to deliver life sentences and death by hanging to innocent victims.

“Five years on, the imprisoned couple are praying for their release and awaiting the relisting of a previously poorly administered appeal.

“The simple fact that the couple could not possibly have written the blasphemous text messages due to being hyper-illiterate should result in their immediate release, however in Pakistan primary evidence can often be ignored and worse still manipulated by powerful and wealthy people intent on doing malice.

“Despite a code of practice courts inevitably permit blasphemy charges without obtaining the necessary authorisation from Government – this flexibility with the rule of law has allowed perpetrators of injustice to allege blasphemy with ease.

“Moreover, the impunity which exist for those who commit perjury to convict innocent victims under false blasphemy charges, only serves to increase the application of such laws to persecute minorities and to settle personal vendettas.

“Laws exist which could easily penalise the perjurers and mobs which attack those accused of blasphemy but are rarely used, court procedures exist that could protect victims from the absurd charges but are ignored.

“This all points in the direction of apathy towards change – clearly no reform of Pakistan’s draconian blasphemy laws will have any effect.

British Asian Christian Association, continues to provide advocacy and humanitarian aid to Christians in South Asia and the South Asian diaspora. We cannot do it without your help please donate by clicking (here)

Badil Masih was sodomised and murdered by his employer Mr Mohammed Ikram and a cohort,…