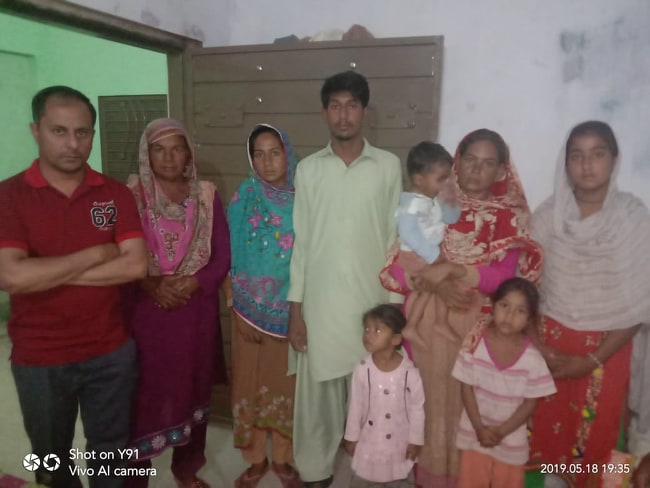 When a Muslim man decided to stand in front of the home of a Christians family last Wednesday (15th May) the gentle approach by the family for him to move away from their doorway because of a perceived threat to the women of the house, became a nasty mob attack.  The beleaguered family and other Christians were attacked by local Muslims who alleged a blasphemy had been committed and now several are facing blasphemy charges which could result in a life sentence.

Early in the morning on that fateful Wednesday morning at around 10am (6am GMT) Syed Bashir Joi (22 yrs) a resident of the same village was talking on a call in front of the house of Farzand Masih (63 yrs) at Chak no 68 EB Dogra wale Tehsil Arif Wala Pakpattan (near Lahore).  Syed began shouting and hollering and using abusive language on the phone which disturbed members of the Christian household. Naveed Masih (25 yrs) was asked to politely ask the Muslim man to move further away from the house because it was unnerving the women of the house and the offensive words were bad for the children to hear.

When Naveed asked Syed Bashir to discontinue the phone call or kindly move to some other place further away from the front of his house Syed took offence.  Syed called Naveed a Chura (dirty cleaner) and used some of the most vulgar expletives while threatening Naveed with death if he a filthy Christian dared asked him to stop his calls again.  He shouted “From now on you bastard I am going to answer my calls before your home every day.”

Syed then punched Naveed on his right eye causing Naveed to defend himself.   When the rest of the Masih family heard the noise they ran and tried to stop the fight and restore peace.  They took Naveed away from the situation and into their home in order to clam the situation.

Meanwhile Syed was continuing his threats saying; ‘You filthy chura have dared to even speak to me a Muslim and have defiled me, just wait and see what I will do to you.”

Fearful of what was going to happen to his family, Naveed  travelled to Arifwala police station after finishing at work around 4pm and submitted an FIR with charges pursuant to Pakistan Penal Code 452 against Syed.

However, at 7.10 pm (3.10pm GMT) after the Muslim Ramadan fast opened and the Iftari feast was held, terrified local Christians including the Masih family heard an announcement from the public address system of the nearby mosque saying:

“These Esai (Muslim term for Christians) have committed a blasphemy by saying bad words against Islam.

“All the lovers of Islam must gather together and force these demonic creatures out of this village.”

The chilling words created a moment of extreme panic and fear among local Christians Shukantilla Masih spoke to BPCA and said:

“This was a horrifying moment for my whole family and other Christians.

“In our panic we started to get ourselves ready to flee our homes and  get far away from the village, however, we were all to slow.

“In no time we start to hear Muslims gather outside our home – even the children.

“The violent mob surrounded our home and all of them had weapons including guns – which were being shot in the air, sticks, axes, poles and farming tools.

“Even the small children had weapons we feared for our lives.

“The mob began shouting outside our home they asking for our family to exit our home and receive divine retribution for our sin.

“It did not seem very divine – we just saw raging evil violent people ready to kill us.”

A neighbouring Christian family came out of their house and attempted to appeal to the mob, they engaged in words of peace to restore harmony.  However the  irate mob were in no mood to listen they began to beat the innocent Christian family.  The Muslim men in the mob shouted out: ‘Leave this area or we will burn you alive and your homes to make our area clean from your defilement.”

Watching the innocent Christian family being attacked for their defence was too much for the Masih family to take so they exited their home, to save the other family and accept the vengeful fate awaiting them.

The two Christian families had 7 men  who were all roundly beaten by around 40 of the Muslim men and children who punched, kicked and beat them with their assembled weapons. Some of the Christian women also came out to help and were beaten but returned to their homes when told they would be kidnapped and raped if they did not exit the melee.  Some Muslim women helped the women escape and then helped the Christian men escape by intervening in the  mob violence allowing the Christian men to flee the growing mob before they were killed.

The two Christian families ran to a local Muslim leader named Sardar Dawood Aslam Dogar, who is a lawyer who won a land litigation case for the Masih family previously and was a proven moderate Muslim. In a very magnanimous gesture Mr Dogar allowed the family into the safety of his walled home.  The Muslim mob however chased the families to the Muslim advocates home and shouted out to him to release the Christian men into their custody.  The mob only left after Mr Dogar called the police and listed an FIR against them – he is now acting as a witness of the violent behaviour of the mob who threatened him also.

Syed Bashir lives approximately 140 yards away from the Masih Home and he had ventured into the Christian community which would normally be avoided by Muslims for fear of defilement.  Muslims and Christians have been living in the same area for generations but have no affiliation between them because local Muslims denigrated them and would refer to them as Chura (dirty cleaners). So the presence of the loud Muslim man was deemed suspicious and a a danger.  Especially as the only church in the area is held in the Masih’s home lead by a Pastor who travels from Gagumandi to Pakpattan (27 km) every Sunday – so the house is a church not only for the 7 local families but for many other families from local villages who make up a congregation of around 100.

The small Christian enclave includes a paltry 7 Christian homes containing altogether around 45-50 Christian people, while residing in the same village area are a Muslim community of around 400-500 people.

The Christian family includes; Farzand Masih (63 yrs), mother Shukantila (60 yrs) and three sons Naveed (25 yrs), Hameed (23 yrs), Tanveer (16 yrs); there are also three daughters (not named at parents request for their safety). The male members of the family labour for the whole day as Masons in order to run the household. Five of the Christian men have been kept in the safe custody of police for their protection – a ploy to calm the mob who assumed they were being arrested.

Since the attack a FIR was submitted for attempted murder against the five Christian men by Syed Bashir and his cronies under section 324 of the Pakistan penal code. We have a copy of the FIR registered under the ref: 278/19:

To date despite evidence of the attack and the involvement of advocate Mr Dogar, none of the Muslim men involved in any of the incident have been arrested.

Our officer Zeeshan Masih visited the families who have returned back to their homes, without the protection of the five men in safe custody. He tells us his taxi was followed by two men on motorcycles who threatened them with beatings if they returned to the area to support the families.  Tensions in the community are severe and polarisation against the Christians in the area is palpable.

Mehwish Bhatti of the British Pakistani Christian Association spoke with the Sub Inspector (SI) Asif Raza via telephone.  SI Raza has confirmed in no uncertain terms that ‘the men are kept in custody for their protection because some people among the Muslim community want to create a local religious issue.’

“There is an ongoing investigation into the two two reported crime and it won’t be safe for these Christian men to stay in their own homes – if they try they will be killed by irate members of the community.” He said.

“Local police from Arifwala police have confirmed that thus far no blasphemy charge has been made which is comforting for the Christian families.

“However we call on people to pray for this situation to improve as Christian families are not sending their children to school for fear that they will be kidnapped or attacked or worse still killed.

“Many Muslim shopkeepers in the area are not allowing the Christian families to buy groceries in a despicable act of hatred.

“Some families have expressed their desperate plea for help as they have had to go without food on some days.

“Shukantilla was upset because all the earning hands in her family are in police custody our finances are at breaking point – we live hand to mouth most days but now we are financially hopeless.”

BPCA have covered the lost wages of the two families and will continue to do so while the 5 men are under safe police custody.  If you would like to help us do this then please donate by clicking (here)

“Clear crimes have been committed by those who formed the violent mob and the evidence of a prominent local Muslim lawyer will no doubt help bring some justice into the situation over time.

“However, we are fearful of the existing social-tension and have alerted local police of our concerns for other Christians outside of police custody.

“We will provide whatever aid we can to the families and our brave officers will be reaching out and meeting the families again to provide fiscal and sustenance support.

“Though initial investigation have not led to the draconian blasphemy laws of Pakistan being adopted, we will continue to monitor the situation and ensure that local police are aware of the global inspection into their handling of the case.”

British Asian Christian Association, continues to provide advocacy and humanitarian aid to Christians in South Asia and the South Asian diaspora. We cannot do it without your help please donate by clicking (here)