The 2022 Pakistan Floods and the Climate Crisis

By Editor18 September 2022No Comments 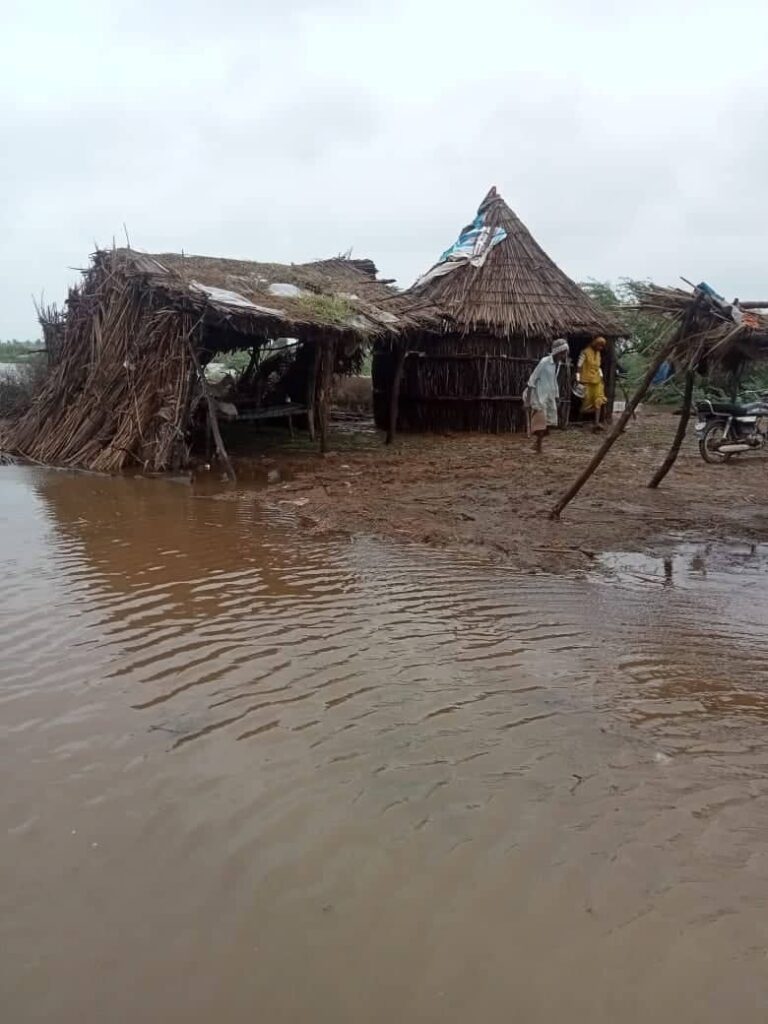 After a recent article of our stirred up both negative and positive responses from some of our supporters, we convinced Revd Darrell a member of the Anglican clergy and a long-term supporter of our group, to write about climate change and the Church.  You may not all agree with the contents but we share it with you to further stimulate a conversation, that we might all grow and learn together.  Either way it is a very interesting and informed read.

I am a sometime supporter of the BACA.  While, I am not of Pakistani or Asian descent and have never visited either Pakistan or the sub-continent, I strongly believe that Christians who live under the constant threat of persecution are entitled to our continual support, through prayers and more practical means.  Their faithfulness challenges our complacency—or, at least, it should!  However, as a full-time Rector of a busy parish, other demands on my time mean that I often only glance at the emails that come my way from the BACA.  This is an area which I would gladly give more time if I had it.

However, I read with interest a recent email about the suffering of the people of Pakistan, Christian and non-Christian, in the wake of the devastating, once in 500 year, floods that have affected 33 million people (that’s half the population of the UK!) and covered a third of the land with water.  Moved by the plight of the people of Pakistan, I made a small donation to the BACA.  But I also wrote to them because I was a little concerned about one line in their email:  “Climate change has been blamed for the floods and to some extent this is true…” (emphasis added).  I challenged BACA on what I took to be their half-hearted support for idea that climate change is caused by humans.  I was saddened and shocked when, in reply, they shared with me the kind of comments they have received from Christian climate change deniers:  that it is arrogant to think that humans can affect the climate, that concern for the environment or, at least, belief that climate change is caused by humans is the equivalent to worshipping creation rather than the Creator, that there is no consensus among climate scientists and that “climate change” is a political stance of the Left or even communist inspired!

While I appreciate that these are sincerely held beliefs, all of them are demonstrably false.  It is, I think, beyond contention that for decades (at least some) climate scientist have been asserting that the earth is warming, and predicting that this trend will continue and will cause an increasing number of extreme weather events, including floods, droughts, more severe hurricanes and typhons, forest fires, and the melting of polar ice caps, resulting in rising ocean levels.  Now, both this assertion and this prediction have come to pass.  The ten hottest years on record have all been since 2010.  While there has been some variation, the trend upwards is unmistakeable and undeniable.  And one would have to wilfully chose to ignore the news not to be aware of the increasing number of deadly floods, forest fires, droughts, landslides, large ice bergs shelving in both the Arctic and Antarctic, etc.  Now, if someone predicts that something will happen and gives good reasons why they are making such a prediction—in this case scientific data and arguments—and what they predicted then comes about, it seems to me only logical and reasonable to, at least, consider the case they are making.  I do not suggest for one moment that if a spiritualist or occultist or New Age shaman were to make predictions and appealed to their belief systems in support, and their predictions seem to be fulfilled, Christians should consider such people as religious authorities.  It would not be in keeping with our beliefs as Christians to do so.  However, it is clear to me that science and Christian faith are not in opposition (cf. e.g., Romans 1:19-20).

I am not a scientist.  My training is in theology, especially in Biblical Studies and early Christian history, not one of the natural sciences.  However, over the past few years I have read quite a bit of climate science.  The case that human activity is behind both the rise in global temperatures and the increasing number and intensity of extreme weather events is, I think, clear and compelling.  Based on studies of ice cores taken from the Artic and Antarctic, we know that there was a natural oscillation of carbon dioxide (CO2) concentrations, between around 175 parts per million (ppm) and 275 ppm, every hundred thousand years or so, and that this lasted for more than eight hundred thousand years.  When the oscillation was at the lower end, about 175 ppm, the earth experienced an ice age; when at the higher end, it enjoyed a much warmer climate.  About a hundred and fifty years ago, the earth was at the high end of 275 ppm and would have been expected to begin seeing a slow decline in CO2 concentrations.  Instead, they began to increase and over the past 150 years, the increase has become a sky rocket.  Today the CO2 concentration is hovering just above 415 ppm.  And this change took place at just the time when humans began to burn fossil fuels.  Now, this exponential rise of carbon in the atmosphere causes warmer temperatures.  For CO2 and other gases, especially methane (CH4), act to block the heat of the sun which “bounces” off the earth.  Rather than being reflected by the earth, a greater concentration of CO2 and CH4 in the atmosphere traps the heat.  This is why these gases are known as “Greenhouse gases,” for the greater concentration of them causes the earth to act like a greenhouse.  With higher temperatures comes wetter weather conditions, and with more water in the atmosphere more extreme weather events occur.  One final point on the science:  CO2, once released into the atmosphere, takes a long time to be removed from the planetary system.  Eventually it will be absorbed into the earth’s surface, but this takes, at the quickest estimate, about a century, at the slowest estimate, about a millennium.  (For anyone wishing to explore the science at more length, I would recommend Peter Wadham’s A Farewell to Ice:  A Report from the Arctic, Penguin Books, 2016, as good a place to start as any.)

Is it fair to assert that the above is a consensus among scientists?  It is certainly a consensus among those who conduct actual research in the climate and publish their findings.  Of course, anyone with a science degree can claim to be a scientist, just as anyone with a Theology degree is, by definition, a theologian.  Consider, for example, the recent claim that more than 1,200 climate scientists have declared the science of climate change to be still uncertain (WCD-version-06272215121.pdf (clintel.org)).  The vast majority of signatories on this list work in fields other than climate science, including geophysicists, geologists, medical doctors, agricultural scientist, etc.  Many on the list not even scientist of any description.  And not a few have ties to the oil and gas industry (see Climate ‘declaration’ recirculates debunked claims | Fact Check (afp.com)).

I hope the above will serve to counter the suggestion that the idea that human activity is behind our changing climate is inspired by those on the left of the political spectrum.  To be sure, the “Left” has been quicker to appreciate the significance of the science than the “Right.”  But it is scientific, not political, reasoning that lies behind the calls to address the climate crisis.  Indeed, I cannot see what is especially conservative about ignoring the science.  To my mind, conserving our planet and its resources seems as conservative as liberal.  More importantly, I cannot see what is especially Christian about “conserving” a materialistic lifestyle which encourages rampant consumption of the earth’s resources.  I continue to ask myself, Where in the Church today do we find the Apostolic emphasis on simplicity we find in, for example, St. Paul’s advice to Timothy:

There is great gain in godly devotion with contentment.  For we brought nothing into this world and we are not able to take anything out.  But having food and shelter, which these we shall be satisfied (1 Tim. 6:6-7)?

What about the claim that environmentalists worship nature rather than God?  It is true that since I have come to understand the science behind climate change and the seriousness of the climate crisis, I have rediscovered in Scripture the importance that God places in His creation and in the role He has entrusted to us as stewards of His world.  I reverence the earth as God’s creation, but I do not worship creation.  I do not confuse creation with the Creator.  As a climate activist and a Christian, I rub shoulders with and work alongside other activists from other traditions, some of whom, I think it fair to say, as neo-pagans, do worship creation.  Others from the Eastern religions of Buddhism and Hinduism would make claims about the sacredness of nature in terms I would not use nor agree with.  However, in conversation with such activists I am able to bear witness to the God revealed in Jesus Christ who transcends His world, who creates and is not be confused with His creatures.  If there are environmentalists who do worship creation, a Christian can work to protect God’s world while worshipping only the Creator.

Finally, the assertion that humans are not able to alter the climate, we do not have it in our power, falters not least in considering the effects which nuclear weapons would have if unleashed.  Think of the term “nuclear winter.”  Moreover, when God entrusted humans with care for His world (Gen. 1:26-28) it is clear that this was not just in relation to the animal kingdom:

Made in His image, our rule or dominion of the earth, should mirror God’s own care and attentiveness.  The sad truth is that far too often our dominion has been little more of than an exploitation of the earth motivated by greed and a desire for our own comfort.

While extreme weather events have taken place throughout human history (and before), it is clear that the recent spate of more and more intense extreme weather events, like the once in 500-year floods in Pakistan, has to be explained.  Anthropogenic (or human induced) climate change has good science behind it; it is not a communist ploy or a neo-pagan trick to lure Christians into the worship of nature.  I believe the floods are a warning to humanity.  I pray that all people, but especially Christians, heed the warning and begin to consume less and reduce their dependence on fossil fuels.

You can learn more climate change through Operation Noah a Christian charity working with the Church to inspire action on the climate crisis (here).

British Asian Christian Association is a charity that provides advocacy and aid to Christians in South Asia. We write articles that inform on political and social matters that affect Christians and other groups.  We are involved in outreach ministry in South Asia and print Bibles.  We also provide disaster recovery assistance to people of all diversities across the globe, where we can.  If you would like to donate towards our work please do so (here).

Waste collected at the house of Mrs X during one clean-up. A Pakistani Christian woman…