By Editor31 January 2019No Comments 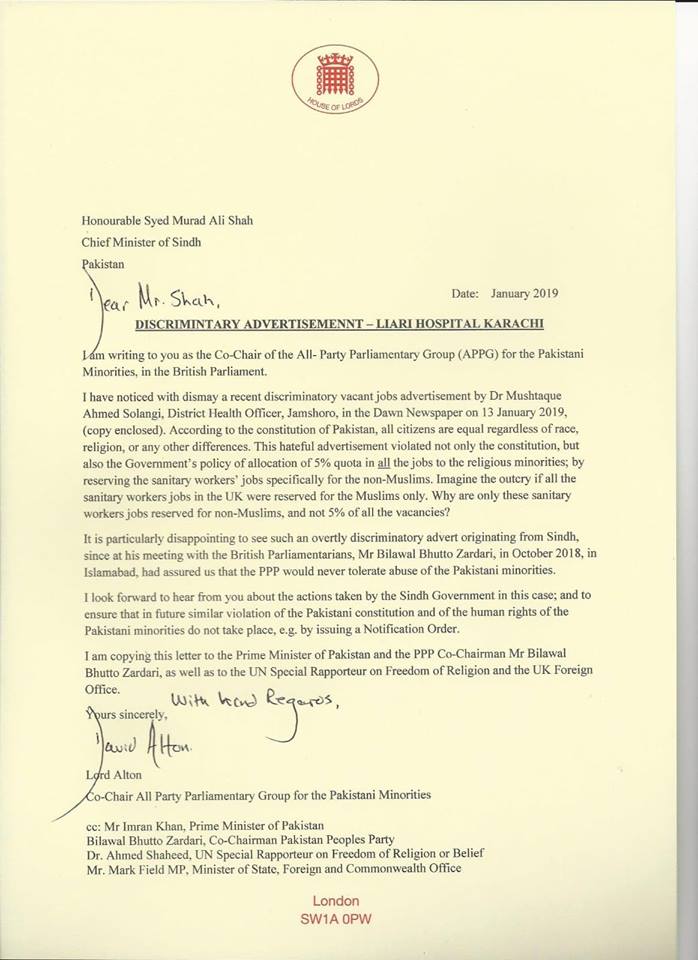 Religious minority rights have a long way to go with ineffective job quotas keeping them in the gutter. Pakistan’s highly educated sewage workers fill quotas while the careers they trained for remain unattainable.  UK Peer Lord Alton has expressed his condemnation for the pervading anti-minority employment culture that for all intents and purposes is a clear indication of the top-down poor governance within the country.

In December, Pakistan’s leadership in Islamabad made efforts over the Christmas season to show goodwill towards religious minorities in some policy statements.(click here) However, the quota system – often touted as a positive measure by the government – saw no improvement.

In Islamababd the Federal Minister for Human Rights Dr. Shireen Mazari announced a helpline the following day saying that free legal aid would be given to any minority suffering a violation of their human rights. However it remains to be seen whether this will have any results in addressing the severe labour hardships and limited options thrust upon Christians and other religious minorities due to their pariah status.

She asserted that the protection of minority and human rights are a priority for PTI and she also mentioned the personal laws for non-Muslims such as a Christian divorce law that she believes will contribute to improving the rights of Christians. (click here)

However, the employability of Christians’ remains a factor for subjugation due to tribalism present in society that allots Non-Muslims menial and dangerous jobs. This limiting action keeps Christians’ in the lowest paying and dirtiest jobs in society and default designated job posts, are relegated to the sewage industry.

Swabi council was petitioned by a militant Islamist party to restrict sanitation job offerings to Non-Muslims and the comments on the thread tell a tale of Christian nurses considered unclean being assigned sanitation work, while less qualified Muslim staff take higher paying positions. (click here) The resolution was unopposed and passed unanimously.

The resolution was presented by Pakistan Tehreek-e-Insaf’s Akmal Khan, and was supported by various members, including Saeed Inayat Ali, Ajwan Khan Jadood, Jahanzaib Khan, Hasmatullah, Maulana Mohammad Shahabuddin, Amir Nawab, Shafqat Rani and others. No one opposed the resolution. The members of the district council unanimously adopted a resolution in this regard demanding that all Muslim posted as sweepers be transferred to other posts, such as those of a guard or peon.

The follow job search from District Jamshoro employment article sheet shows that the requirement for being a sanitation worker is solitary:  The worker must be Non-Muslim.

Jamshoro District Health Officer clearly believes that impure non-Muslims are a danger to the health of Muslims and must be relegated to sanitary roles.

One of the ways the Government of Pakistan claims to be helping overcome the discrimination against religious minorities is by reserving a certain proportion of state positions for them – in other words, a certain proportion of civil service jobs have to be given to minorities. In theory this means that talented and well educated minority candidates can get respected jobs that use their qualifications.

The reality turns out to be rather different. An article in 2012 Pakistani newspaper The Express Tribune (click here) gave both anecdotal and statistical evidence that the positions of ‘bhangi’ – sanitation workers, involving cleaning toilets etc, are being given pretty much exclusively to minority members – Sikhs, Hindus and Christians etc. In some cases, well educated minority members with degrees chose to leave well paid but somewhat insecure jobs in the private sphere to join what they thought would be respected and secure jobs in the civil service. They were heart-broken to find they had essentially been downgraded from responsible jobs to the equivalent of the ‘chuhras’ ‘street-sweepers’, a term that is used as an insult for Christians.

Nothing has changed six years later!

The article spoke of dozens of departments across the country only allow minorities to apply for sanitation workers jobs. Even in the Sindh minorities Department, nearly all of the sanitation workers are Christians or Hindus. A Christian worker testified that every single Christian graduate holder who applied for a civil service job in their area was offered the job of sanitation worker. They also claimed that the of the few Muslims who had sanitation jobs, nearly all just took salaries, but didn’t actually work.  Only last week a further article re-highlighted the absenteeism of paid Muslim cleaners and their outright refusal to clean sewers. The situation got so bad that the Supreme Court made a drastic ruling forcing authorities to sack all Muslim cleaners. To read the Dawn article (click here).

If anything this means that minority Christians even with degrees are going to be recruited to fill these vacant roles – the situation has worsened!

The 2012 Express article illustrated the extent of the despair minorities feel after one well-educated Hindu sanitation worker said he didn’t plan to spend much money on education for his children as it was a complete waste of time for minorities. Christians spoke of the shame and degradation of being forced into such menial jobs. In other words, the much trumpeted ‘5% quota’ is a charade and a sham, and only serves to perpetuate the deep discrimination it is purported to ameliorate.

Non-Muslims are considered dirty and it is considered too impure to drink from the same location as Muslims. (Click here) to read more about intolerance for religious diversity in Pakistan.

“These quota systems are often used as little more than a lip service response to placate western governments, in order to attain foreign aid budgets.

“Some would rather the government not get involved in qualifying minorities and assessing their employment needs, because they think it keeps minorities hidden and more protected.

“As if somehow not having a quota system or the government not having accurate census data protects Christians; However, the reality is that it hides the sobering realities that Christians face leaving them unaddressed.

“A decent census allows progress mapping and a quota is required in a country steeped in prejudice and tribalism.

“Quota systems can be abused, but they are still a helpful tool to improve minority prospects. Ostensibly ignored by the government, but if quotas were properly employed they could be a useful mechanism to ensure basic human rights.”

Deaf-mute Christian girl subjected to 5-man gang-rape and torture for 2 months, due to police negligence and local Muslim community acceptance of the crime