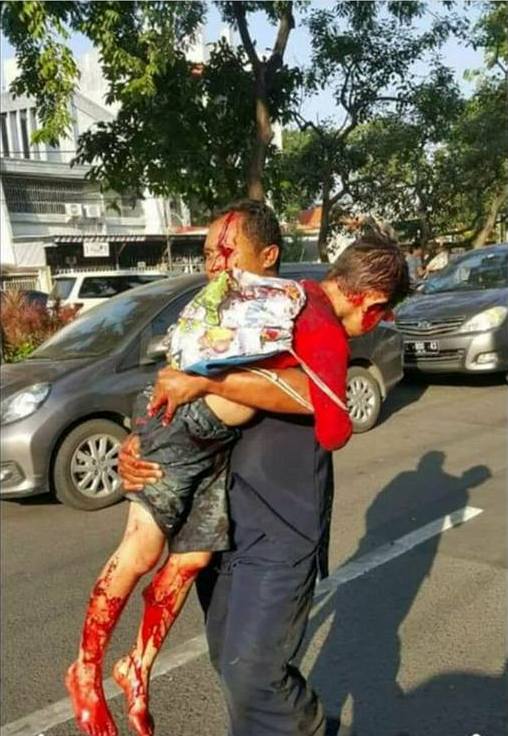 This morning (Sunday 13th May) three churches in the city of Surabaya, Indonesia were attacked by a family of 6 Islamist terrorists (involving their underaged children) in an attack that has left at least 10 people dead and a current count of 41 people injured – including two police officers and the terrorists.

Santa Maria Catholic Church, GKI Protestant Church of Diponegoro and the Pentecostal Central Church all based in the port city of Surabaya on the east coast of Java Island, became scenes of deadly carnage as worshippers attended their morning church services.

Indonesia boasts the largest body of Muslims of any nation – 82% of the 260,500,000 people within the country profess to follow the Islamic faith. The second largest body of believers in the nation is Christianity and it is believed that around 10% of the population follow the Christian faith.

Indonesia has been beset with domestic terrorist groups, particularly affiliates of the international terror group al-Qaeda, the most known satellite group being the Jemaah Islamiyah. JI were responsible for 11 terrorist attacks between 2000 – 2010, including the deadly 2002 Bali bombings, which left more than 200 people dead and hundreds injured, many of the victims were foreign tourists.

The capital city of Jakarta became the scene of a terrorists attack in May last year when two suicide bombers killed least three police officers and wounded a further six officers and five civilians. It is believed that the attack was made by an affiliate of ISIS.

Mariella Djorghi, an Indonesian Christian Campaigner who joined British Asian Christian Association for a protest outside the Centre for Islamic Studies, Oxford, last year after vice-president Jusuf Kalla, not known for his moderate credentials, was invited to speak on ‘Moderate Islam’ in Indonesia  (click here), described her concerns about this latest attack in Indonesia:

“Attacks on churches and Christians is not a new phenomenon in Indonesia. What is new is, despite all the economic progress, the display of hostility against Christians has been more public and strident.   And that this has been carried out by a whole family, including the 9 & 12 year old daughters who also had bombs strapped to their waists is shocking beyond belief.

“There have not been any meaningful attempts made to tackle early radicalisation in madrassas or mosques. The Parliament is still stalling on a bill to effectively tackle terrorism, as we speak.

“Their ineptitude is a sad indictment of what was once a multicultural, tolerant country, swallowed up by Arabisation and puritanical Islam.”

“We have been praying for the victims of this utterly condemnable attack since hearing about it this morning. Christians across the Islamic world have increasingly been the target of attacks by Islamists in recent years with little if anything being done by Governments to stem the tide.

“Indonesia has a proud history of pluralism and inclusivity but the last two decades have seen a drastic shift towards a hitherto unseen intolerance.

“In the most recent report the attack has been attributed to one particular family inspired by ISIS, the hatred that has been reinforced in this family led to the mother and father chillingly involving their young children in the terrorist plot (click here).

“One can only guess the promises made by Islamists of the special place in heaven reserved for their suicide killing of innocent Christians.

It beggars belief that people can be so easily influenced to perpetrate such heinous and gory crimes especially when many of them lived peacefully with minority faiths, until they were washed of their wits by false doctrine and misspent religious zeal.

“Indoctrination of hate ideology is made easy due to the demonizing of minorities and the unchecked hate-preaching of rogue Imams. Sadly Arab funding has increased the teaching of hard-line sects like Wahabism and Salafism across Indonesia and many other Islamic nations.

“Moreover, the fact that top politicians use Islam to curry favour over Christian politicians in competition against them (click here) suggests that either radicalism has beset the highest echelons of authority in the nation, or that the moral vacuum in the country is waning extremely thin.  Either way the future bodes ill for a once egalitarian nation.”

Image of suicide bomb family – even the two young daughters had bombs strapped to their waists.