Top marks for miracle child who at 1.5 years of age, survived loss of right leg and bowels in bomb attack!

By Editor9 January 2023No Comments 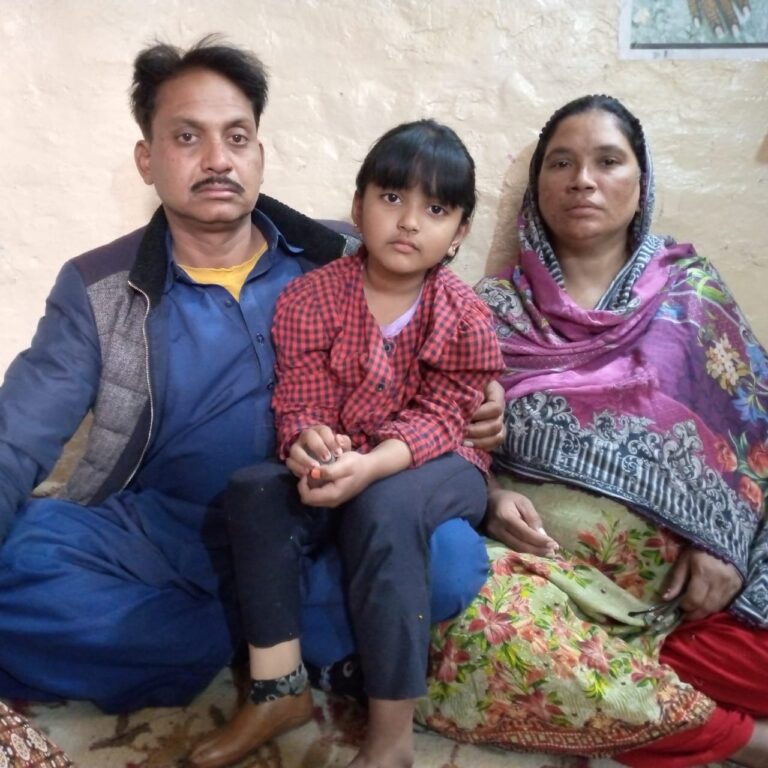 IMAGE:  Aleeza Masih and her parents in January 2022 as they sought a new limb.

Aleeza Masih(6 yrs) was 1.5 years when she survived the brutal terrorist attack on a church in Quetta on 17th December 2017 (click here).

The attack on Bethel Memorial Methodist Church during a nativity service, killed 9 people. The attack would have been more devastating had it not been for the bravery of volunteer Christian security officers (click here).

Aleeza Masih lost her left leg (from knee downwards) and bowels after a large piece of shrapnel embedded itself into her limb.

She was initially treated at a public hospital where medical staff failed to clean the wound properly and life-threatening gangrene set in.

BACA stepped in, took Aleeza Masih to a private hospital in Karachi where she went through a second operation, thus saving her life (click here).

In a recent End of Year school exam Aleeza, came third overall in her year group with a score of 99%. For her Christian father who is an illiterate sweeper this result has been overwhelming.

Aleeza, has been receiving one annual new prosthetic limb through BACA. Last year we began a programme of two limbs a year to cope with her more vigorous growth. Now Aleeza needs BACA’s support again to install the next of her scheduled prosthetic limb changes.

VIDEO: In August 2022 Aleeza was able to illustrate through walking that her new prosthetic limb wa indistinguishable from her real leg.

In August 2022, we helped Aleeza (6 yrs) obtain her latest prosthetic limb.  Aleeza is going through a pronounced period of growth and is requiring a new limb now. That previous limb, is already to small and this is affecting her mobility.  Prolonged use of an incorrectly-sized-limb can cause swelling and inflammation and pain for Aleeza and we reopen her appeal in order to obtain a re-sized limb.  You can donate towards our appeal (here)

We asked for a progress report for Aleeza, we have always been concerned about her overall well-being and not just involved in helping with a physical replacement limb. Her father Ashiq Masih (52 yrs), spoke with BACA, he said:

“Aleeza is doing well and she is growing healthy and fast.

“She loves going to school and enjoys playing with her friends in the neighbourhood and at her school.

“Despite the loss of a limb she is very active and can always be  found running or dancing, she is very coordinated it’s a joy to watch her.

“Aleeza loves to study and is a keen artist.

“She has been performing well at school and  and excelled in her recent annual exams in December, attaining first place in her class.”

“When we were told Aleeza was third in her year group, we felt great pride.

“She is a miracle from God.

“She survived a bomb attack with severe injuries, but I am amazed at her intelligence the most.

“I work as a sweeper, and I am illiterate.

“She has had no extra help from me, how can I?

“She just works hard and will be someone great in the future – God has plans for her life and we rejoice in his favour.”

Ashiq Masih works as a sweeper in a Government College in Quetta and resides in the small quarters allotted to the college workers. He has seven children, six are daughters. Aleeza is the youngest child.

Aleeza’s mother Shamima Bibi(50 yrs) is a housewife though she used to work as a maid at the houses of the college faculty.  Shamima, was hit by shrapnel that embedded in her stomach and leg, during the Quetta Church Attack and has not been able to work since.  Without the support of our donors, this family simply would not be able to afford the necessary replacement prosthetic limbs for Aleeza.

“The support grip has torn apart and it hurts her when she walks.

“A new limb will allow her to continue being mobile, energetic and able to cope with the environment around her.

“We thank God for her life.”

VIDEO:  Aleeza is a prayerful child and trusts in God’s protection over her life.

Aleeza needs a new prosthetic leg and we hope we can bring this to fruition, this January. A made-to-measure replacement will cost £600 pounds including the journey for Aleeza and her the parents to Agha Khan Hospital in Karachi. If you would like to contribute to this work, please donate (here).

Around 200 congregants were inside the church on the day of the terrorist attack at the Quetta Church on 17th December 2017. Parishioners were about to take Holy Communion when the terrorists unleashed the attack on Bethel Memorial Methodist Church in Quetta. The attack left 9 dead and more than 50 injured.

The bravery of Christian security officers has been noted.   You can read more of their bravery and sacrifice (here)

“A rapid response from our donors allowed us to step in and save her life through God’s grace.

“Aleeza’s passion for life is infectious a short watch of her many videos on our website, illustrate how richly God has blessed her.

“Her confidence has inspired us – every penny spent on her has been worth it.