By Editor12 October 2018No Comments 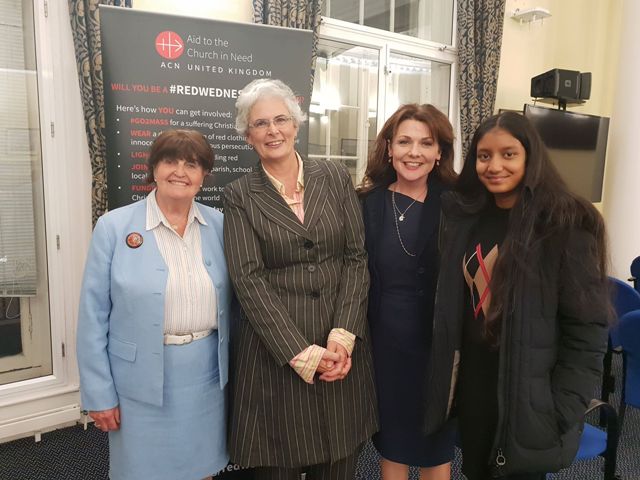 A young Redbridge girl of only 14 yrs slammed the Pakistani Government for failing to protect vulnerable young girls in Pakistan at an event at Notre Dame University, Suffolk Street, London yesterday.  The event was organised by Aid to the Church in Need a Catholic charity that helps Persecuted Christians.

During a ten-minute speech at the prestigious university Hannah described the torrid treatment of Pakistani Christians in a nation where intolerance has reached a peak, due to the inculcation of hate-ideology within the national curriculum of Pakistan.

Hannah Chowdhry, during her speech said:

“700 Christian Girls are kidnapped raped and forced into Islamic marriage every year – yet the world stays silent. The average age of those abducted is 13. To help you gain some perspective of their vulnerability I share with you that I am 14 years of age.” Her message seemed to create a palpable atmosphere of concern.

“1 million Christians are deployed in brick kilns under indentured labour contracts, working 14 hours a day, for £3. A patriarch  will have signed a slavery contract with a thumbprint as they are too illiterate to write their own name. The conditions within the contract place their wives, children and future generations under the same yoke of slavery.”

“Slavery has proliferated despite anti-slavery laws having been introduced since 1992.”

Hannah also explained how the polarization in Pakistani society has caused them to be a natural target for terrorist attacks. Especially as national curriculum textbooks have been found to label Christians as spies for the west in a report written by the ‘United States Commission for International Religious Freedom’ in 2013.

“4 terrorist attacks in four years have resulted in a death toll of over 200 and a list of victims who are severely injured above 500.  In the 8 years that BPCA has been in operation 7 Churches and over 700 homes have been razed to the ground.  Mobs were generated by Imams preaching hatred from mosque PA’s.

“Incensed Muslims provoked by allegations of a blasphemy attacked Christian communities whom they had been living side to side with for many years.

“We remember the victims of Gojra, of Korian, of Mehrabadi, of St Joseph’s Colony, of Mardan and those not mentioned here.”

Hannah called for change in Pakistan’s handling of their religious minorities saying, “I am glad I am living of the UK where there is equality for all diversities. I am praying for Pakistan as a nation to create a society where Christians can live in freedom and safety.” Though the Pakistani constitution says there is freedom of religion the day to day reality is far from it.

Asia has been languishing in prison for nine years for drinking water from the same water bowl as Muslims, an act that because of her Christian faith was said to have contaminated the water.

Eisham (18 yrs), spoke bravely often with tears in her eyes as she recalled how on what is now for her a half a lifetime ago, at the age of nine, she was an eye-witness to the brutality of her mother’s Muslim accusers as they beat and did disgusting things to her mother.

“For the last nine years I have been missing my mother, without her my life is incomplete.

“I am praying that my mother will be with me as soon as possible so that I can live the rest of my life with her, and I ask that you all also pray for our  family, especially my mother Asia,” as she broke into tears”

Ashiq Masih has spoken with Wilson Chowdhry and shared how he is hoping to seek asylum in a country in the west after his wife Asia Bibi is released.  He described concern that under current asylum rules he may struggle to bring his complete family out of Pakistan.  Ashiq explained that though two of his children are dependants, as one is mentally impaired and Eisham is still unmarried and lives with them, that he is concerned about his other married children.

Ashiq believes if he and Asia escape with the two younger children his other children and their spouses will be subject to revenge attacks by those who believe Asia has blasphemed and call for her blood.  Moreover he shared how his heart would break to be away from the older children and he knows that Asia would be torn asunder by having to leave them behind. BPCA asserts that Asia Bibi has lived apart from her family for long enough and should not be divided from her family members any longer.  She deserves a time of peace and stability in her life with all the close members of her family around her.

Pakistan’s Supreme Court has now finished hearing the appeal of Asia Bibi’s death sentence on trumped up blasphemy charges. Asia Bibi was working in a field with other women and shared water with them. Incensed that an “unclean” Christian had defiled their drinking water the Muslim women took their complaint to a Imam who admittedly was not present to have her charged with blasphemy. Asia Bibi has suffered violence, isolation from her family and bouts of poor health over the years and has served more time for blasphemy than anyone else in Pakistan’s recent history. To read more about her unjust conviction and the status of the appeal (click here).

We have created a petition which people can sign calling for western nations to allow asylum to the entire family of Asia Bibi, which you can sign by clicking (here)

Evidence of no go area for Christians in UK!