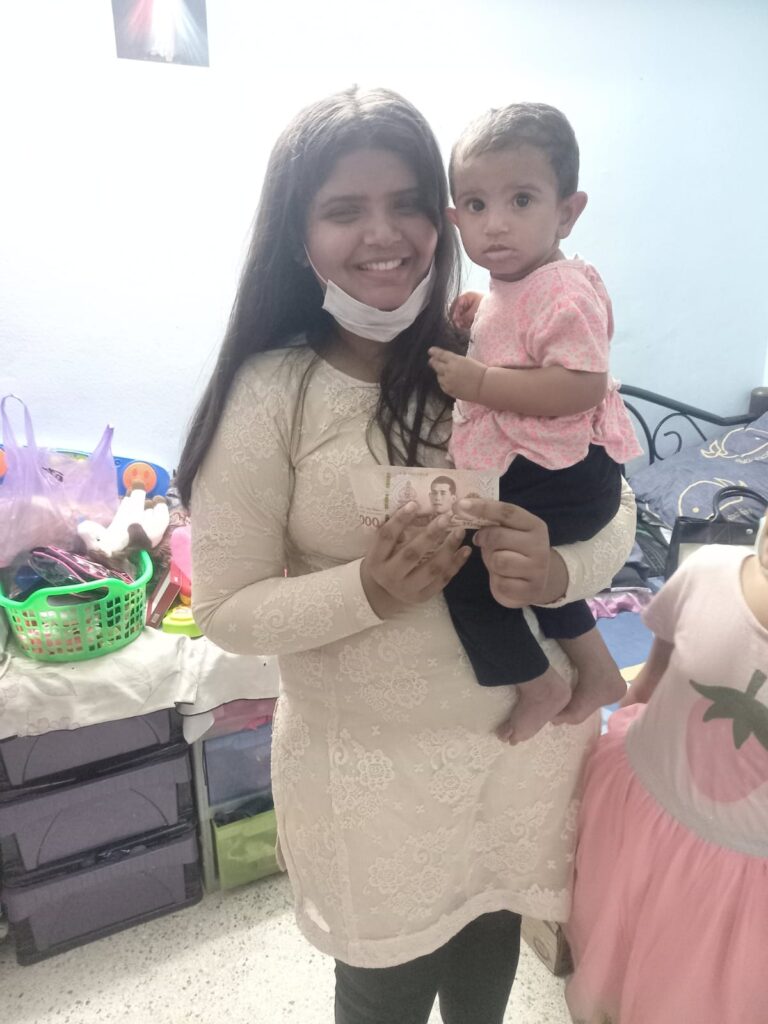 There are several thousand Pak-Christian asylum seekers in Thailand all of whom are treated as illegal immigrants, even though a large percentage have either UNHCR registration as an official asylum seeker or refugee. This forces them to work cash in hand jobs for a pittance under extremely difficult and unsafe circumstances.  Last year a Pak-Christian father died after a fall from a high ladder and was entitled to no compensation, even worse the business that hired him was not punished.  Babar Ishaq left behind a large family with a severely mentally-impaired child – they are one of our beneficiaries.  Weiterlesen (Hier)

In our last report we explained that Pak-Christians in Thailand are facing increased discrimination due to the spread of the Indian Omicron variant and fears associated with that. Many of these Christians have been waiting for more than 6 years to exit Thailand living a life in limbo. Weiterlesen (Hier)

As you can imagine many of these families struggle to make ends meet and every single family there is reliant on hand outs and charity.  Most of theses asylum seekers are from middle-class or wealthy backgrounds [the BBC report below suggests some where doctors, teachers and had other good employment] and have lost everything when fleeing a blasphemy allegation or  rape and forced marriage.  If you would like to help us with our grant programme you can donate (Hier).

BACA has helped some of the refugee families pay their overstay fines before they leave Thailand for settlement in Australia or Canada and will continue to do so to make the transition as seamless as possible for these beleaguered Pak-Christians.  One of the recent families we have helped were a family directly impacted by the attack on Gojra in 2009, that led to the creation of our charity.  Weiterlesen (Hier)

Newer supporters may not be aware of our ground-breaking work that has allowed asylum to these two nations to include for Pak-Christians.  We share this historic post which tells of how BACA persuaded the Australian government to introduce a quota of 100 Pakistani Christians a year on their sponsored asylum programme (Klicke hier).  We are now seeing the blessing of that work as those quotas are being filled.  In March two other families also left Thailand for Australia including the families of Charles Bhatti and Amjad Saleem.  We wish them all well.

Moreover, the Canadian Immigration and Refugee Board are still using reports sent to them by our group, to assess Pak-Christians, after our efforts induced Special Immigration status for the diaspora.  Weiterlesen (Hier).

On 29th June 2022, ten asylum seeker families benefited from a 1000baht donations towards food from BACA. Most of these Christian families left Pakistan due to the attack on Gojra in 2009 and the attack on St Joseph’s community in Lahore in 2013.  Weiterlesen (Klicke hier).

We have been helping between 10 – 20 families every month depending on the level of donations received.  The money helps struggling families eat healthy, nourishing meals. You can help us continue this work by donating (Hier).

On 30th November, British Asian Christian Association will be awarded for their community work at the 4th London…