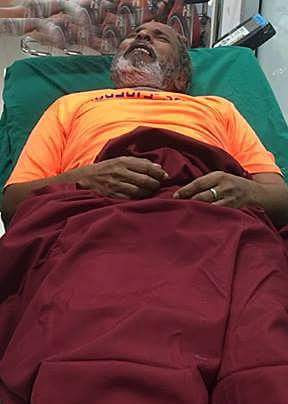 While Pakistani Christian asylum seekers were overcoming the demoralizing loss of a dear sister Samina Faisal (haga clic aquí),
following alleged failures in duty of care leading to her death through kidney complications, another victim lost his fight for freedom.

53 year old Pervaiz Ghouri Masih who was suffering with a tumor and recurring heart condition, struggled with the lack of nourishment and cold, dingy, insalubrious overcrowded cells of Thailand’s notoriously brutal Immigration Detention Centre (IDC), which cumulatively were just too much for his frail body to take.  A father of six daughters, Pervaiz was arrested alone while resting at home on 10th September 2015.  He was not set free by charities struggling to raise the £1000 required to free detainees on bail, which consequently affords a two year protection from rearrests. Women with children as vulnerable groups were prioritized while Pervaiz was fatally overlooked.

As a Christian Pervaiz was excited by the onset of Christmas, rejoicing that his saviour had come to earth to reconcile man with God. His celebration of Christ’s birth was not met with a savoury stuffed turkey and lip smacking cranberry sauce, but with cold boiled water with cucumber segments, described by his jailors as cucumber soup. No table, chair or bed were provided for his comfort despite his sallow appearance and intimated poor health, no, Pervais was required to find what little space he could find on the floor of a room that can barely squeeze one hundred people into it, crammed with over 150 detainees. Here Pervaiz had to eat, sleep and live out the final days of his wretched existence.

His crime that befitted such punishment? Simply seeking freedom from the intimidation and ever present threat to the lives of all his family. On the run from extremists in Pakistan he and his family entered Thailand in February 2012. They had been surviving on a mixture of low paid, abusive, exploitive labour and charitable handouts. As severe as this lifestyle might seem, to the family, the pressure was still an improvement from the daily threats they were receiving from neighbours in Pakistan, after a false blasphemy allegation was placed upon them due to a petty squabble based on jealousy.

His health deteriorated to an extremely low ebb on 6th January 2016 and only then did the IDC wardens decide to release him and take him to a local hospital. Here the implementing partner of the United Nations High Commissioner for Refugees (UNHCR), known as Bangkok Refugee Centre covered the costs of his hospital care. Even after exacerbating his existing known health condition through a lack of duty of care, the Thai government was still unwilling to pay the medical costs of a non-citizen. After a battle for survival poor Pervaiz lost his life to a heart attack on 10th January 2016 without any family members present.  They were warned not to attend by the UNHCR through fear they would themselves be arrested for not having visas.

For this family the pain has been all too much. They have now decided to return to Pakistan with the body of Pervaiz. Here they hope they can seek solace through other family members despite the knowledge that they will be unsafe and could potentially lose more lives. The family cannot comprehend that attempts to escape persecution have been met with more persecution culminating in the death of the head of their family. Though memories of Pakistan are tough, memories of Thailand are now even harsher. The family are terrified and will live a meagre existence trying to survive by staying under the radar, a sad demeaning life but one they now prefer as their morale has reached a nadir. Conversely the family of Samina Faisal have decided to stay in Thailand and bury her locally wanting to be near her as they struggle for emancipation. For them as for many others the painful memories of Pakistan are a fate worse than death.

As we write this story a delegation of UNHCR officers have accompanied the family to help them return home. The efforts of the UNHCR in helping persecuted Pak-Christian asylum seekers return home to a place of danger has been so immediate, in contradiction to their approach to helping them attain asylum and resettlement in a safer country, a response which has been condemned by Chairman of the BPCA, Wilson Chowdhry, he said:

“The speed in which officers of the UNHCR have mobilized to send these Pak-Christian asylum seekers home, despite the registered threat to their lives, is offensive. Their insouciance to the concerns of the family have no doubt contributed to the consuming dejection felt by them, that has forced the family back into the climate of hatred they had hoped to escape. This callous act may yet lead to even more death.”

“Despite an extensive report provide by the BPCA on the persecution Christians face in Pakistan, the UNHCR continue to hold to a fallacious position that Christians in Pakistan are severely discriminated against and not persecuted. This misinformed policy requires a serious review unfettered by global realpolitik.”

We hope to create a more streamlined approach for families to send back dead bodies to their torturous homeland without delay or confusion for the grieving families. The reason for this facilitation is the evidential and alarming increase in deaths of Pak-Christians asylum seekers in detention centres due to an obviated duty of care.  For asylum seekers living outside of the IDC a simple lack of finance to pay for necessary medical treatment, sadly often for treatable or curable conditions or illnesses is exacting a similar death toll.

This tragic incident only emphasizes the urgency of paying the fines that let these brothers and sisters out and provides them with immunity from such
raids for two years. This costs about £1000 per person.

Chowdhry added that working with other NGOs and Thai fellow Christians, they had managed to pay smaller fines to release 11 out of 16 Christians who
had been sent to the Central jail and moved to the IDC.

“However, that just gets them out from a criminal jail into the still intolerably bad IDC, and as we have seen that is costing lives. We know of over 60 Pakistani Christians arrested, with the largest number arrested on Christmas Eve itself. The vast majority are women and children, but some of them are breadwinners with dependents who are now in an even worse state than before”.

“We need at least £36000 just to get the women detainees and their children out of the hell-hole, and if we don’t get that quickly, we will need to spend more just to help provide for those left behind whilst we try and raise funds. The Bail system has only recently re-opened for women and those with serious medical conditions, we pray that men will soon be afforded the same freedom, but that will mean we will need a further £65,000 to free them.”

Alternatively you can donate via our PayPal, our email address is: admin@britishpakistanichristians.co.uk.

With your support we hope to change the lives of millions of Pakistani Christians.