By Editor23 August 2018No Comments 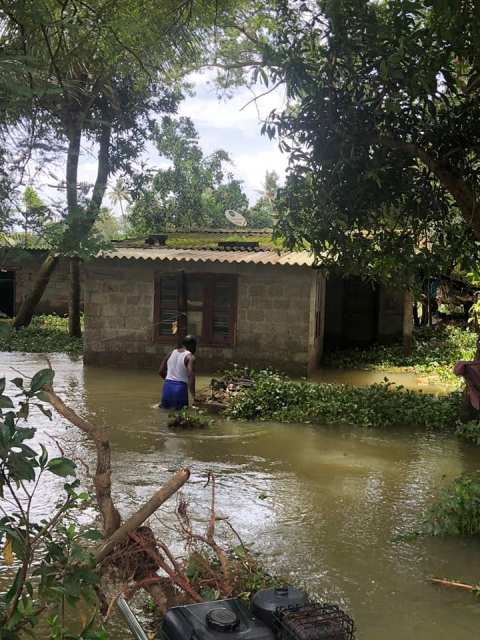 A vigorous southwest monsoon has left a trail of destruction across India’s southern state of Kerala, killing over 400 people and leaving over 220,000 people homeless as their homes have either been washed away or are in no fit state to live in.

Security forces rescued over 450,000 stranded people and got them to safety in a massive operation, said to be the biggest of its kind ever to be conducted in India. Despite their best efforts landslides, deep waters and crashing debris injured and killed thousands reminding us all how devastating nature can be.

Hundreds being cared for by Pastor Sajhit and his church.

20,000 homes have been completely destroyed and statutory agencies are only beginning the restoration work necessary to bring the other 200,000 homes into a fit-state for re-dwelling the 750,000 survivors of the deluge.

The floods which began on August 8th killing 29 people in one day, are reported to be the worst floods to hit Kerala in close to 100 years the last one of this scale being recorded in 1924.  But the worst is not over and it is believed the high death toll is set to rise with reports of dengue fever, influenza, amoebic dysentery, malaria and other waterborne infections reaching unprecedented levels.

Currently 1790 relief camps have been set-up across the state to house survivors but spaces are cramped and even now there are food shortages. Supplies are being provided by the Government but the demand is extremely great and much more aid is required to help victims.

British Pakistani Christian Association, has partnered with a local church who have been helping 68 families by providing shelter and food to many Christians in Changenachary, Kottayam District.  We spoke with Pastor Sajith Joseph, who said:

“The floods were on an unprecedented scale and none of our people were ready for what was going to happen. People saw everything they had worked and saved for washed away forever within hours of the beginning of the rainfall.

“The rain fell for weeks and weeks and we all prayed that God would protect us it was like the story of Noah, water was simply everywhere.

“Many Christians went to Hindu charities to seek help but they refused aid to our people once they discovered we were Christian through our names.

“Our church however filled the gap and we managed to help via assistance from international charities, we are now providing food and a shelter for 68 families.”

“Some of the survivors with us are extremely ill and we need to get medication to help them, this devastating flood has created great panic in our community and we ask that Christian brothers and sisters pray for us.”

“I am alarmed to hear from Pastor Sajith that Hindu charities are refusing to give aid to Christians. Such bias in the face of the brutality of the recent deluge is an indictment of the growing intolerance in India, where minorities are facing ever increasing levels of persecution.”

“You would have thought a national tragedy of this proportion with such a high death count would have helped people place differences aside and focus on sharing the responsibility to restore their living conditions – sadly this is not the case.

“Hundreds of people have died from the ferocity of the flood but there is huge potential for the death toll to increase exponentially unless medical provisions are implemented within these communities immediately.  Already Pastor Sajith has advised us that many victims have stomach pains and high fevers and may have very serious conditions.

“Although the rain has stopped, large areas are still flooded and people are stranded creating an environment ripe for the spread of waterborne infections. We simply have to pray in earnest for the safety of the many homeless survivors.”

British Asian Christian Association, has set up a fund to provide medical treatment and equipment, blankets and clothes, food and water and other essential to victims of the flood. If you would like to help these victims please donate by clicking (here)

Fresh produce is being brought in from the Deccan region of India.

Our Christian brothers and sister do not complain they are just getting on with things praising God that they are alive.

Food is being cooked in large utensils.

Image of Royal Wedding event held last year. A peace event will be held in…

Aleeza was only 1.5yrs when she lost her leg in a terrorist attack, now she needs your help for a new prosthetic limb