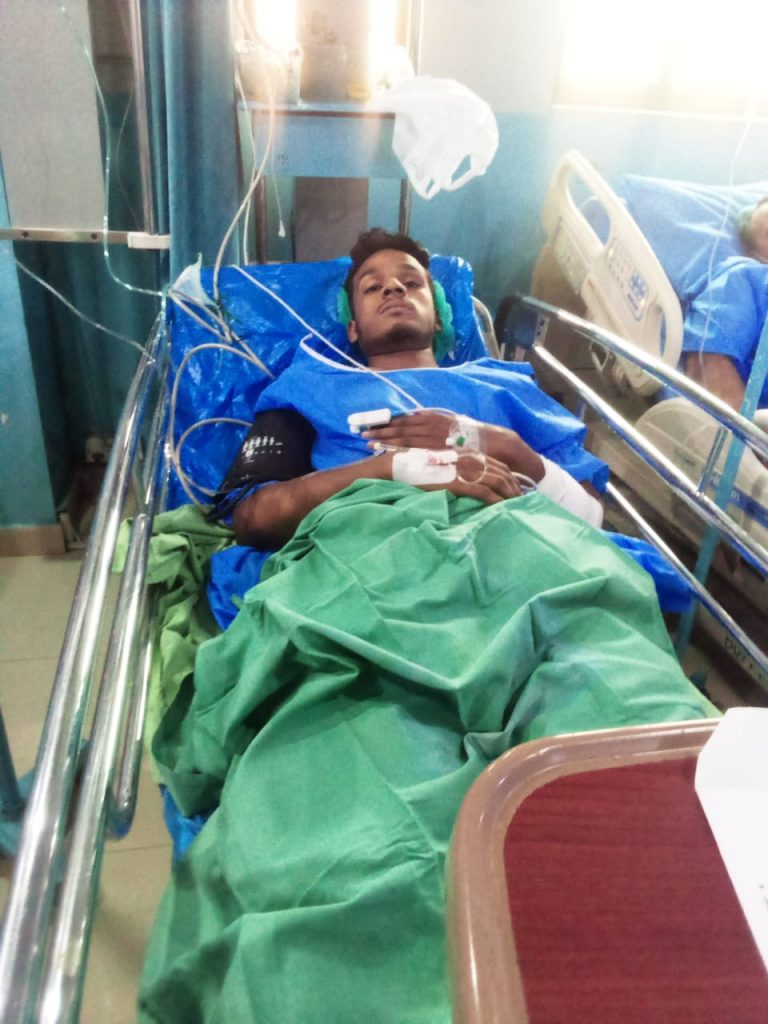 Nabeel Masih a Christian Teenager of only 16 years old when convicted of blasphemy had been released from prison on bail on 18th March, after a two year long campaign and legal battle led by British Asian Christian Association.  Read more and watch video (ਇਥੇ)

The young man now 20 years of age was smuggled to a place of secrecy and is now hoping to restart his life abroad, free from the threats of death that he faces in Pakistan.

BACA hope to soon get Nabeel Masih a swift exit to a country of safety, but first we must ensure he is acquitted from the blasphemy trial that has stolen 4 of the most important years of his young life.

After his release Nabeel showed BACA’s team in Pakistan large painful lumps across his body.  After we paid for a medical examination (20th March) it was revealed that these were lipomas developed due to his stagnant life in a decrepit cell in complete isolation . These lipomas grew extremely large during his stay in prison and caused great discomfort and pain, limiting his ability to sleep.  Despite several complaints made to prison wardens during his 4 years in prison, Nabeel was never given any medical treatment. ਹੋਰ ਪੜ੍ਹੋ (ਇਥੇ) 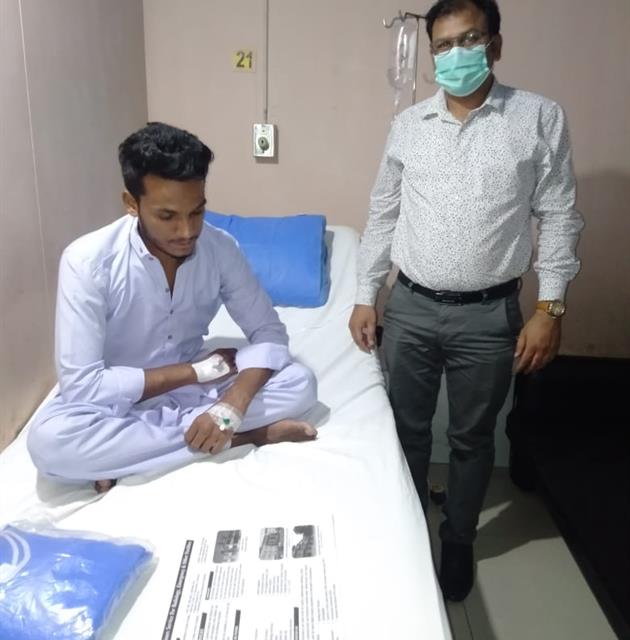 After a biopsy was undertaken on Nabeel on 25th March, the examining doctor advised surgery for the removal of the lipomas. With the help of an Irish Charity we were able to pay for the operation which was succesfully undertaken on 5th May.

Nabeel was admitted to a private hospital, Farooq Hospital, Lahore where after necessary preliminary tests his surgery then took just over two hours.  After the removal of the lipomas he was kept under medical observation overnight and discharged the next day on 6th May. 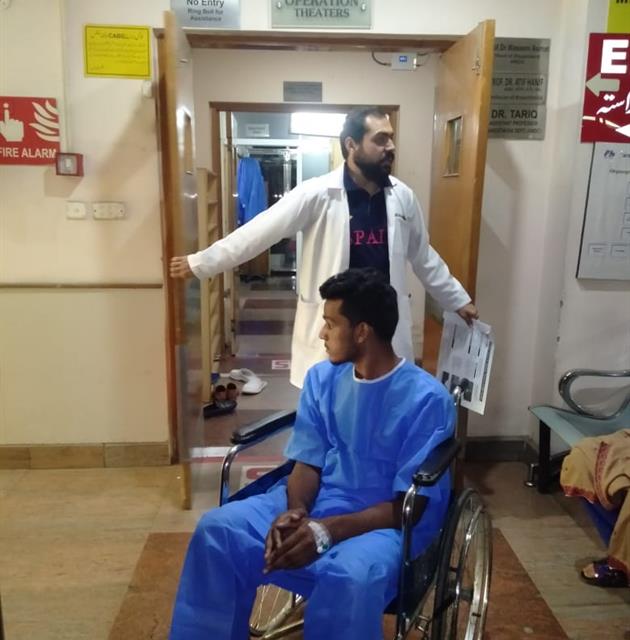 Since then Nabeel had a follow-up consultation on 17th May and then on the 27th of May his sutures were removed.

Nabeel has showed his deep gratitude for the procedure which has removed the large and unsightly lumpps and alleviated his pain and discomfort. He said:

“I feel much relieved.

“I am thankful to  BACA who took me safely to the hospital and stayed with me during the procedure and afterwards.”

“When I was in prison I never dreamed I would be out so soon or receive so much support and help.

“Our God is a great God and has made it possible for me to restart my life while still young.

“When attempts were made to introduce a death sentence on me, God intervened and stopped the success of my persecutors.

“I thank God for his mercy on me.”

BACA has now also arranged a dresser to regularly clean and bandage the wounds at Nabeel’s home. Nabeel is healing fast. 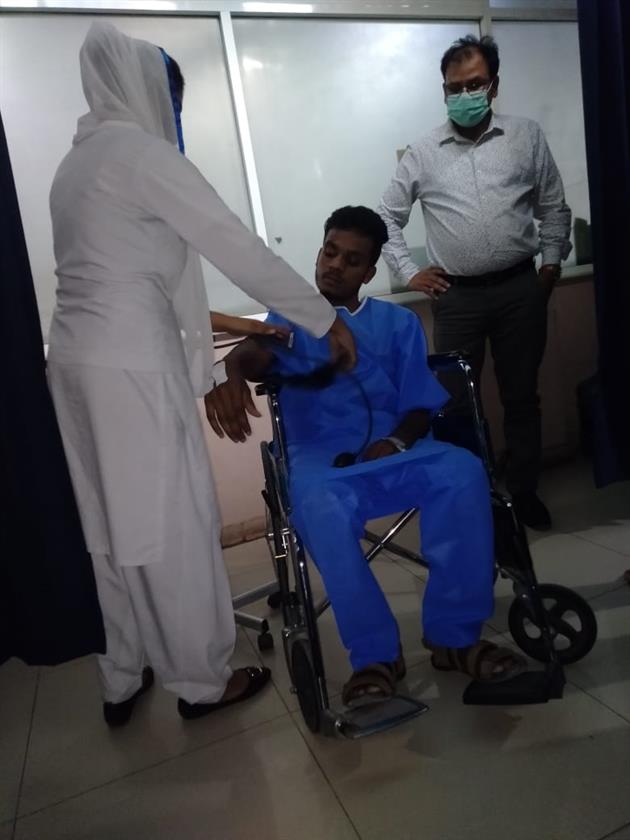 On the 8th of May District Judge Shamroze Iftakhar placed a strict instruction on the complainant counsel to have their argument for Nabeel to be returned to prison ready by a next hearing in June.  The judge warned them that they had delayed the court procedure long enough and that he was not happy that his decision has been delayed due to their unpreparedness.

In hearing on 8th May, the complainant’s counsel sought another date for arguments. Honorable Judge, in anxious tone replied to the complainant counsel,

“Please furnish your arguments, I had given you enough days to prepare and now request to postpone the argument is quite wrong. I will decide on merit and if you don’t argue I will close this case.

“Sir, we have filed an application which is pending for decision by honorable High Courts Lahore.”

“ I am committed to proceed this case and decide on merit. I will:close this case here but the the record will be kept alive here. We can reopen the case when a decision is pronounced by Honorable High Courts Lahore.”

At which point Naseeb Anjum, the BACA sponsored counsel for Nabeel Masih explained to the honorable judge:

To bring readers up to date, Nabeel Masih should already be acquitted.  The Home Department has already made a decision not to challenge the appeal for release of Nabeel Masih, it is only the belligerance of an Imam who desires to be the plaintiff in the Home Department’s place that the court process has been delayed so long. If the Home Office denies the Imam opportunity to be the plaintiff the case should be dismissed by the District Course based on the lack of witnesses and the phone from which the blasphemous texts were viewed not being his own.  Nabeel Maish has sent 4 years in jail without being convicted and it is our real hope that 2021 will be the year that he is totally free of these false charges.

A date has been set for a next hearing in the District Courts in June but will only proceed if the High Court has made it’s decison by then.

“It has been a horrid 4 years for Nabeel Masih who was accused and kept in jail under false blasphemy charges since the age of 16 years.

“he has been released on bail and since we have taken over the case we have even discovered that he was never convicted for blasphemy, he just was not getting a decent legal counsel.

“The Home Department has refused to challenge his release from prison and are not pursuing any charges of blasphemy – the evidence simply does not exist.

“Even then an Imam is pursuing an unwinnable case simply to destroy the life of a young Christian man – this reeks of prejudice.

“No action will ever be taken against the intolerant Imam desite the years of pain that Nabeel has suffered.

“The District Courts in Pakistan need to be more robust in their procedure to ensure such miscarriages of justice are prevented in future.”

BACA is hopeful that we will have a complete exoneration of Nabeel Masih soon.  Fighting his case and that of other blasphemy victims and other suport provided is an expensive process and one we cannot continue without your help.  If you are able to contribute towards our work please explore the list of donations options listed (ਇਥੇ).