By admin24 November 2018No Comments 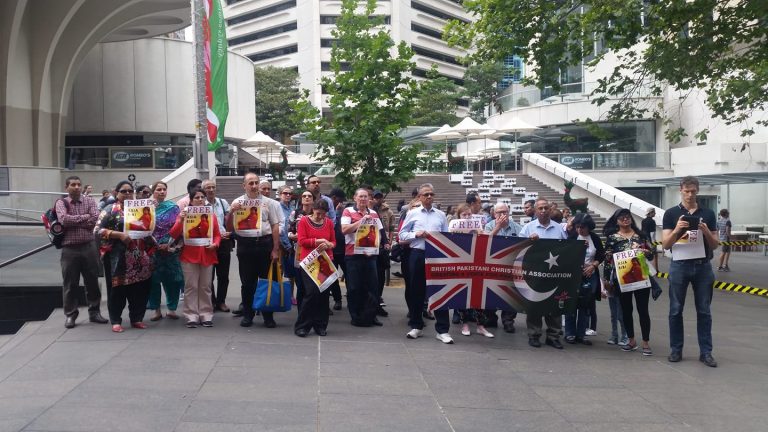 The British Pakistani Christian Association (BPCA) held a vigil in Sydney today commencing at 12pm at NSW Parliament House, fighting for the rights of Asia Bibi and other persecuted Christians in Pakistan. In 2009, Asia Bibi, was accused of blasphemy after an argument related to drinking at a communal well designated for Muslims. In their minds, Asia’s ritual impurity meant that the water was contaminated.

Blasphemy allegations are often contrived to wound, marginalize and vilify the already persecuted Christian minority. These laws are a tool often used to settle personal vendettas, for personal gain, or for usurping somebody’s possessions and to persecute untouchable Christians and other minorities.

The rally was a peaceful, albeit powerful and profound appeal to the Australian public and the West to be on the right side of history and to be part of the change to make this world a better place.  Australia decided to be on the right side of history today and in a landmark decision the Hon Peter Dutton has reversed his prior repudiation of asylum for Asia and said that if efforts to grant Asia asylum in Canada fail, Australia will welcome her with open arms. This is a testament to the massive grassroots efforts of the BPCA and its followers supporters and the momentum and traction that many campaigners helped acquired by placing continual pressure on the Australian government. This is a positive sign that Australia may now be a safe haven for persecuted minorities.

Sophie York, candidate for the senate for the Australian Conservatives, issued a compelling condemnation of the blasphemy laws and appealed to the West to grant asylum to Asia Bibi and to lovingly uphold the rule of law and democratic processes. She applauded the fact that Australia honours the separation of powers of doctrines and rulings issued by its highest courts and called upon Pakistan to do the same.

Sophie admonished Pakistan Prime Minister, Imran Khan’s handling of the Asia Bibi matter, referencing the fact that as a well-renowned cricket player he should understand the rules of fair play. Thus, his attempt to obviate the rule of law and entertain the diabolical aspirations of extremists wishing to have the case reviewed is abominable. He was acting ultra vires, that is, beyond the scope of his powers in considering their calls for an appeal.

However, it is worth noting that today, the leader of Tehreek-i-Labbaik Pakistan (TLP),Khadim Hussain Rizvi, was placed in “protective custody” in a guest house, according to Information Minister, Fawad Chaudhry. Furthermore, according to numerous reports a significant number of arrests of extremists have been made. This is an encouraging sign that PM Imran Khan has ceased capitulating to extremists and is beginning to succumb to mounting pressure from the West, including Australia who has audaciously repudiated its prior refusal for asylum and now has assumed a welcoming position.

There was a rather poignant moment outside the Pakistani Consulate, Sydney where protesters confronted the Pakistani Consular employees and directly called for asylum and for a repeal of the blasphemy laws – laws which are unequivocally archaic, medieval and barbaric in their construction.

“The use of blasphemy allegations to oppress minorities is widespread and extra-judicial killings are extremely prevalent, as epitomized by the case of Shama and Shazad two brick kiln slaves who were tortured and burnt alive in front of their own children. The West is only beginning to become cognizant of the catastrophic persecution of Christians in Pakistan and that we must continue to petition Western government to intervene to end these atrocities.”

Wilson Chowdhry also maligned the UK for refusing to offer asylum pointing out that safe haven was immediately granted to Malala Yousafzai and Salman Rushdie in their times of need. Does this mean that the UK has now capitulated to extremists and is now under the stranglehold of extremists? Does this mean the UK is now held hostage to extremist encroachment? This is a sad set of affairs for a country once lauded for its human rights record.

Wilson implored the West to recognize the rampant persecution of Christians and other minorities in Pakistan referencing the fact that according to a Muslim NGO 700 Christian girls are abducted and raped annually and a further 300 Hindu girls face the same fate – a figure that BPCA regards as conservative.

Ahead of serious discourse and discussions with key political figures and the Australian Christian Lobby (ACL) next week in Canberra, BPCA compels Australians to recognize the gravity of the situation in Pakistan and unite to end encroachments on freedom of speech, thought and conscience. Now is the time to unite behind persecuted minorities and carve out a pathway for safe asylum for genuine refugees facing severe hardship.

Women’s pursuit of godliness at home

Lord Alton: International Day Commemorating the Victims of Acts of Violence Based on Religion or Belief