Call it by its name: ‘Persecution!’ – New book release by Desmond Fernandes and the BACA detailing the plight of Pakistani Christians 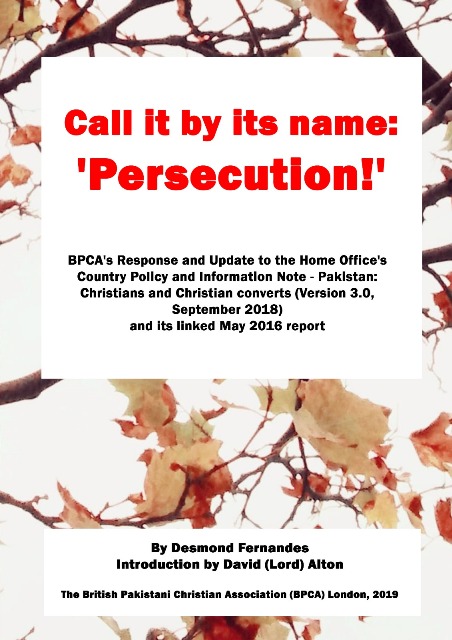 The British Asian Christian Association has published a 490 page book authored by Desmond Fernandes – Call it by its name: ‘Persecution!’ – that comprehensively analyses and documents the manner in which Christians have been – and continue to be – persecuted throughout Pakistan.

For Saleh Memon, a member of the Campaign Against Criminalising Communities: “This book paints a truly horrific picture of the treatment of Christians in Pakistan, based on concrete evidence. It also shows how Pakistani politics have gone toxic when politicians and religious leaders are using extreme communalism to gain political leverage. It is clear that Christians are discriminated in all spheres of life – religious practice, habitation, employment, education, health and general social well-being. On top of this, blasphemy laws are invoked and used deliberately to victimise Christians, taking security of life from them as individuals. They are frequently subjected to mob justice. The rule of law with fair trial in front of a jury is often abandoned. The police and security forces often become judge, jury and executioners”.

David (Lord) Alton, former Vice-Chair of the UK All Party Parliamentary Group on International Freedom of Religion or Belief and Co-Founder of the Jubilee Campaign, in the ‘Introduction’ to the book, describes it as an “excellent book, which covers all the important ground relating to Christians in Pakistan and the persecution that they face”. He argues that it “needs to be seriously considered by the Home Office policy analysts” and “consulted by UNHCR [the United Nations’ refugee agency’s] staff in Bangkok … It also urgently needs to be read” by the UK Prime Minister’s Special Envoy on Freedom of Religion or Belief and Foreign and Commonwealth Office (FCO) policy makers because “it provides up to date information that, hopefully, will result in revised guidance …

Call it by its name: ‘Persecution!’ (paperback) can be purchased for ‎£10 (excluding postage & packing) via the British Asian Christian Association’s (BACA’s) online shop(here).

“This book … should be essential reading for all policy makers/analysts, lawyers, refugee rights campaigners, members of the public, academics and parliamentarians who are concerned about persecuted individuals and groups (inclusive of Christians) in Pakistan”.

The book exposes the manner in which the Home Office’s ‘guidance’ on refugee-determination linked issues, seemingly inspired by the UK government’s ‘hostile/compliant environment’ immigration policy, has been skewed in a ‘deep political’[i] manner to advance ‘zero tolerance’ immigration agendas, irrespective of the genuine ‘persecution’ status of asylum seeking Pakistani Christians and targeted ‘Others’.

The Home Office’s most recent September 2018 ‘Country Policy and Information Note’ on ‘Pakistan: Christians and Christian converts’ – which UK and UNHCR decision makers rely on for ‘guidance’ in determining the ‘refugee status’ of Pakistani Christian asylum seekers – scandalously asserts that “Christians in Pakistan are a religious minority who, in general, suffer discrimination, but this is not sufficient to amount to a real risk of persecution”.

Open Doors, for example, in its ‘World Watch List’, ranks Pakistan at number 5 in its list of the 50 countries where Christians experience the ‘most extreme’ levels of persecution.

Findings from Fernandes’ book also point towards a specific UK government immigration policy that explicitly discriminates against nationals from Pakistan by placing them on a secret ‘list’. We are made aware that Mansouri and Son, a solicitors and law firm, has confirmed that “the UK Border Agency has drawn up” a “secret list” which “is not available publicly and Entry Clearance Officers are explicitly forbidden from disclosing the existence of the list”.

This ‘secret list’, human rights lawyer Shahram Taghavi points out, scandalously “not only offends against the established fundamental human rights principle of not discriminating on the grounds of nationality or race, but also violates a cardinal principle of the rule of law, the principle that laws must be accessible to citizens”. This policy, when placed within a wider framework that is outlined in Fernandes’ book, is shown to sit alongside others that have targeted the Windrush generation and Chagossian islanders.

Fernandes draws upon a wide range of sources to detail the scandalous manner in which Pakistani Christians, alongside ‘Othered’ asylum seekers, have become mere ‘bargaining chips’ in cynical ‘deep political’ aid/trade/immigration/foreign policy/electioneering/intelligence and ‘security’ arrangements. Consequently, it is shocking to note that the rejection rate in the UK for asylum seekers from Pakistan (where the Baloch, Hazaras, Ahmadi Muslims and several targeted others are being targeted in a genocidal context)[ii] currently stands at 86% (This is well above the average percentage rejection rate of asylum seekers to the UK). EU asylum and refugee policies, he confirms, have also been just as problematically formulated in a ‘deep political’ fashion. Consequently, by April 2016, the rejection rate for ‘Pakistani migrants’/’Pakistani asylum seekers’ from the EU stood at over 90 percent.

The Foreign and Commonwealth Office’s (FCO’s) assessments in Pakistani Christian ‘persecution-related’ matters are also subjected to detailed scrutiny and criticism. The UK government’s recent decision to refuse to offer Asia Bibi and her family asylum is also critically assessed, alongside David Stewart’s contention that “Britain’s asylum policy is effectively being directed by mobs in Pakistan, a charge that the government unconvincingly tried to refute”.

Call it by its name: ‘Persecution!’ has been presented to the Home and Foreign Secretaries and formally accepted as a submission of evidence by the inquiry team examining the nature of persecution of Christians worldwide, chaired by the Bishop of Truro, which is focused upon the FCO’s policies and practices. The book’s findings and conclusions further support the basis of the recent appeal by Cardinal Vincent Nichols and the Archbishop of Canterbury that the scope of the Bishop’s government-backed inquiry “should be expanded to include departments beyond the FCO” such as “the Department for International Development (DFID), the Department for International Trade, the Cabinet Office, the National Security Council and the Home Office. ‘The government’s work promoting FoRB [Freedom of Religion or Belief] should not be seen as an isolated strand of diplomatic activity, but incorporated into aid, trade, resettlement, asylum and security policy’, they wrote”.[iii]

In the wake of the reported targeting and murder of Christians by militants from the Taliban and affiliates of the Islamic State and the violent mass mobilisations in Pakistan that were spearheaded by the Tehreek-e-Labbaik party in November 2018 (calling for the hanging of Asia Bibi), and in light of a number of recent court judgements and controversial ‘initiatives’ by the new Imran Khan government, the book also assesses how ‘secure’ or ‘insecure’ Christians are in Pakistan today.

Call it by its name: ‘Persecution!’ (paperback) can be purchased for ‎£10 (excluding postage & packing) via the British Asian Christian Association’s (BACA’s) online shop (here).

Notes on the author: Desmond Fernandes
is a genocide scholar, author of Education, Human Rights Violations in Pakistan and the Scandal involving UNHCR and Christian asylum seekers in Thailand (BPCA: London, 2016, 3rd edition) as well as joint-author of The Targeting of Minority ‘Others’ in Pakistan (BPCA: London, 2013) and The Education System in Pakistan: Discrimination and the Targeting of the ‘Other’ (BPCA: London, 2014). Formerly a Senior Lecturer in Human Geography at De Montfort University (UK), his works on persecution, genocide and the criminalisation of communities have been translated into a number of languages, including French, Dutch, German, Greek, Turkish and Kurdish.

Call it by its name: ‘Persecution!’ (paperback) can be purchased for ‎ £10 (excluding postage & packing) via the British Asian Christian Association’s (BACA’s) online shop(here).

[i] ‘Deep politics’ is defined by Peter Dale Scott as “all those political practices and arrangements, deliberate or not, which are usually repressed rather than acknowledged” – Scott, P. D. (1996) Deep Politics and the Death of JFK. University of California Press: Berkeley and Los Angeles, p. 6, 7.
Further clarification of this view, notes Rachel Weber, “comes with his definition of deep political analysis: ‘looking beneath public formulations of policy issues to the bureaucratic, economic and ultimately covert and criminal activities which underlie them’” – Weber, R. (undated) ‘Peter Dale Scott’s Deep Politics’ (accessed at: http://mcadams.posc.mu.edu/scott.htm).